Mario Puzo was an Italian-American author, journalist, and screenwriter famous for his crime novels about the Sicilian Mafia and Italian-American Mafia. His novel, The Godfather was later co-adapted into an award-winning film trilogy, and he received an Academy Award for the first and the second installments. Born into a poor family of Italian immigrants in US, he had a difficult childhood. He served in the US Army Air Forces during World War II and began his literary career after the war. His literary works draw heavily on his heritage and the struggles of his youth. He started publishing his stories and books in the 1950s, and it took him several years to establish himself as a successful writer. With time, Mario Puzo ventured into screenwriting and enjoyed much success in this field as well. The publication of his novel, The Godfather, changed the trajectory of his career forever. The book sold millions of copies and was eventually developed into a film trilogy. Mario Puzo wrote the original screenplay for the superhero film Superman. He was also the author of several other novels, short stories, and non-fiction pieces besides The Godfather. He died shortly before the publication of his novel Omerta. Danny DeVito
DID WE MISS SOMEONE?
CLICK HERE AND TELL US
WE'LL MAKE SURE
THEY'RE HERE A.S.A.P
Quick Facts

Mario Francis Puzo was born on October 15, 1920, in the Hell's Kitchen area of New York City, to a family of Italian immigrants. His parents, Antonio and Maria Le Conti Puzo, hailed from the Province of Avellino, Campania. He had six siblings.

He had a difficult early life. His father, who worked as a trackman for the New York Central Railroad, suffered from mental health issues. When Mario was 12, his father was committed to the Pilgrim State Hospital insane asylum as he was believed to be suffering from schizophrenia.

His mother single-handedly raised the seven children. The family lived in poverty and struggled to survive. 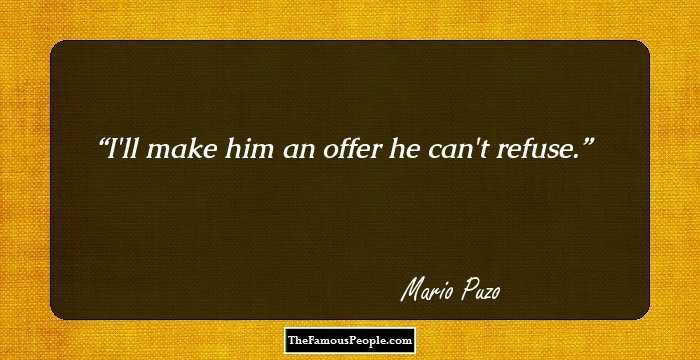 As a young man, Mario Puzo joined the US Army Air Forces. He had poor eyesight and was ineligible for combat duties, so the military made him a public relations officer. He was stationed in Germany for some time during World War II.

Upon his return, he enrolled at the City College of New York and received his degree.

By this time, he had started writing. His first short story, The Last Christmas, was published in the magazine American Vanguard in 1950. After five years, his first book, The Dark Arena, was published.

In the 1960s, Puzo contributed to men’s magazines, such as True Action, Male, and Swank’ He wrote World War II adventure pieces for True Action under the pseudonym Mario Cleri.

In 1969, he published what would become his best-known work, the novel, The Godfather. A crime novel, it told the story of a Mafia family based in New York City. There were rumors that the novel was based on the author’s life experiences; he denied the allegations.

’The Godfather’ became a bestseller and sold over nine million copies within a two-year span. Impressed by the success of the novel, director Francis Ford Coppola decided to collaborate with Puzo to adapt the novel into a film.

Motivated by the success of the film The Godfather, Coppola and Puzo once again collaborated on the second installment of The Godfather film series. The Godfather Part II, released in 1974, outdid its predecessor and is considered to be one of the greatest films of all time.

Mario Puzo wrote the first draft of the screenplay for the disaster film Earthquake; in mid-1972, but he couldn’t continue with the project. George Fox then took over the project, and the film was released in 1974. Puzo was credited in the completed film.

Mario Puzo wrote the original screenplay for the film Superman, including in the script the plot for a sequel. The film was released in 1978 and was a critical and commercial success, becoming the second-highest-grossing release of the year.

He also made important contributions to the screenplays of the films A Time to Die (1982) and The Cotton Club (1984).

In 1990, Mario Puzo published the novel The Fourth K. It was a hypothetical account of a fictional member of the Kennedy family becoming the president of the United States in the early 2000s. The novel, though a commercial failure, was close to Puzo’s heart.

He died before the publication of his final books, Omerta and The Family. These books were published posthumously in the early 2000s. 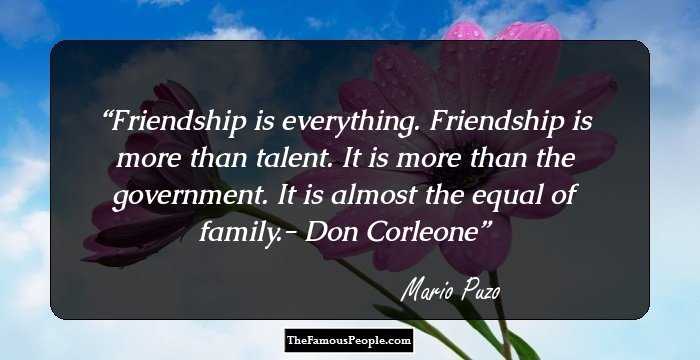 Mario Puzo is best known as the author of the novel The Godfather. It tells the story of a fictional Mafia family based in New York City. The novel sold over nine million copies in two years and stayed on The New York Times Best Seller list for 67 weeks. It was later adapted into a film series of the same name.

Mario Puzo married Erika Lina Broske, a German woman, in 1946. They had five children: three sons and two daughters. His wife died of breast cancer in 1978.

He eventually began a relationship with his late wife’s nurse, Carol Gino. 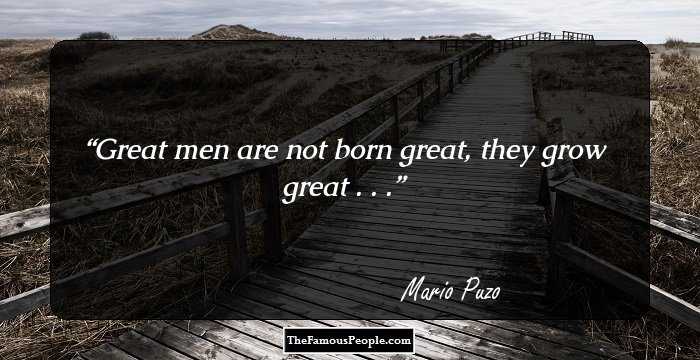 See the events in life of Mario Puzo in Chronological Order