Francis Ford Coppola is a famous American filmmaker, director, producer, and screenwriter. He is best known for his films like ‘The Godfather,’ ‘The Godfather Part II,’ and ‘Apocalypse Now.’ Coppola is known for his imaginative creativity and artistic precision. He started his filmmaking career when he was still a student at the ‘UCLA Film School.’ He made a few noticeable movies before directing ‘The Godfather,’ the movie with which he revolutionized the gangster genre cinema. He was reluctant to direct a movie like that, but he took up the challenge and won several ‘Academy Awards’ for it. He then went on to make the Vietnam War-based movie ‘Apocalypse Now’ and gained acclaim for it. The glorious era of Coppola’s film-making career is considered to be the 70s. During the 80s and 90s, too many creative and commercial disappointments came his way. Apart from being a filmmaker, he is also a successful businessman; he owns a winery, restaurant, lifestyle resorts, etc. Coppola’s children Sofia and Roman are well-known filmmakers in Hollywood. Francis Ford Coppola was born on April 7, 1939, in Detroit, Michigan, USA, to Carmine and Italia Coppola. His father was a flautist with the ‘Detroit Symphony Orchestra.’ His father also worked as an arranger and assistant orchestra director for ‘The Ford Sunday Evening Hour.’

Coppola had polio in his early years, and he was bedridden for a good part of his childhood. He was an average student in school but was known for his high curiosity in science and technology.

He was trained to be a musician and became an expert in playing the tuba, which earned him a music scholarship to the ‘New York Military Academy.’ He did his major in theater arts from ‘Hofstra University’ in 1955.

Coppola did exceptionally well at the university. He founded the cinema workshop at ‘Hofstra’ and also made contributions to their literary magazine. He won three ‘D.H. Lawrence Awards’ for his directorial talent at the university and graduated in 1959. 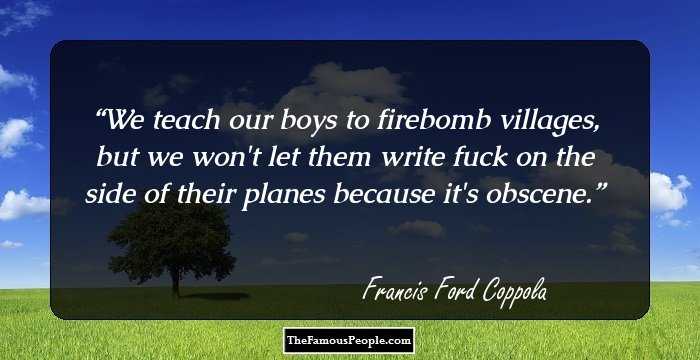 Coppola entered ‘UCLA Film School’ in 1960, and started experimenting with direction. Right after entering the institute, he directed ‘The Two Christophers,’ a short horror movie, and ‘Tonight for Sure,’ a light comedy.

In 1962, Roger Corman appointed Francis Ford Coppola as an assistant to re-edit a Russian sci-fi called ‘Nebo Zovyot.’ With his skills, Coppola turned the film into a sex-and-violence monster movie titled ‘Battle Beyond the Sun.’

Corman was very happy with Coppola’s work and therefore kept offering him projects from 1962 to 1963. He worked as the dialogue director for the movie ‘Tower of London,’ sound man for ‘The Young Racers,’ and associate producer for ‘The Terror.’

On Corman’s insistence, Coppola made ‘Dementia 13’ in 1963. He wrote the script of the movie in one night and directed it in just nine days. The movie became a cult hit amongst the horror movie fans.

Coppola was hired by ‘Seven Arts’ as a scriptwriter in 1965. The following year, he released ‘You’re a Big Boy Now,’ which was a ‘Warner Bros’ production. He also came up with his UCLA thesis project.

Coppola tasted mainstream success after the release of ‘The Rain People’ in 1969. The movie was written, directed, and co-produced by Coppola. The film won the ‘Golden Shell’ at the 1969 ‘San Sebastian Film Festival.’

In 1970, Coppola wrote the script for the movie ‘Patton’ along with Edmund H. North. This movie became an iconic hit and won him an ‘Academy Award’ for ‘Best Original Screenplay.’

Francis Ford Coppola then came up with the most glorious movie of his film career, ‘The Godfather’ in 1972. He was not Paramount’s first choice to direct the film and Coppola himself was hesitant in taking up the project, but ultimately the film earned him an ‘Oscar’ and two ‘Golden Globes.’

The year 1974 was an exciting one in Coppola’s film career; he directed ‘The Conversation’ and won his first ‘Palme d’Or’ at the ‘Cannes Film Festival.’ He also wrote the screenplay for ‘The Great Gatsby’ and directed ‘The Godfather Part II,’ which won him three ‘Oscars.’

Coppola went on to direct the 1979 epic war film ‘Apocalypse Now,’ which won him many awards and became a masterpiece of the New Hollywood era. It is also one of the finest movies ever made on the ‘Vietnam War.’

From 1982 to 1983, many of his films bombed at the box office. ‘One from the Heart’ left him bankrupt, while he was not credited properly for ‘Hammett.’ This was followed by the failure of ‘The Outsiders’ and ‘Rumble Fish’ which affected Coppola’s image to an extent.

In the mid-1980s, Coppola continued to make more movies, but could not create the same magic as before. He directed ‘The Cotton Club,’ which failed at the box office but gained critical acclaim. During this period, he also directed projects like ‘Captain EO’ and ‘Peggy Sue Got Married.’

Coppola directed ‘Tucker: The Man and His Dream’ in 1988, a movie based on the life of the famous Preston Tucker. It was a refreshing change in his film career as the movie earned many prestigious award nominations.

In 1989, he was one of the three directors to direct an anthology film titled ‘New York Stories.’ The film consists of three short stories. While the second story 'Life Without Zoë' was directed by Coppola, the first and third were directed by Martin Scorsese and Woody Allen, respectively. Coppola wrote the script for 'Life Without Zoë' along with his daughter.

In 1990, he came up with ‘The Godfather Part III,’ which became a moderate success. Coppola cast his daughter Sofia in the movie, which was nominated for several awards.

Coppola’s next success came with the adaptation of Bram Stoker’s ‘Dracula.’ Titled ‘Bram Stoker’s Dracula,’ the film was a box office success and became the ninth highest-grossing film of the year. It also won three ‘Academy Awards.’

In 1996, he made a movie titled ‘Jack’ with Robin Williams in the lead. Coppola was highly criticized for making the movie as some critics thought he was underusing his talent by making movies like ‘Jack.’

Coppola made ‘The Rainmaker,’ an adaptation of John Grisham’s novel, in 1997. Starring Matt Damon and Danny DeVito, the movie was critically acclaimed and also did quite well at the box office.

After a hiatus of 10 years, he returned with ‘Youth Without Youth’ in 2007. It was based on Mircea Eliade’s novella of the same name. The movie tanked at the box office and was a disappointment. 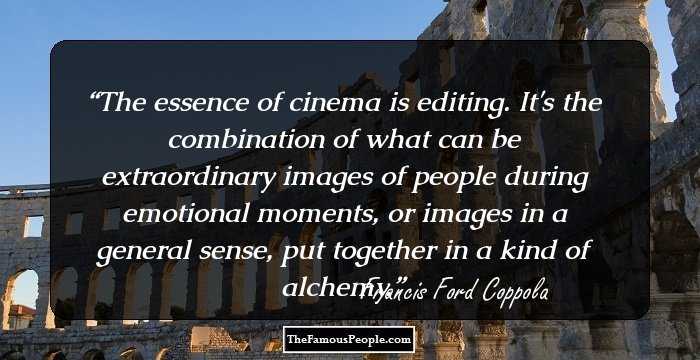 Some of his highly acclaimed works are ‘The Godfather’ (1972), ‘The Godfather Part II’ (1974), and ‘Apocalypse Now’ (1979). These movies established Coppola as an iconic filmmaker in the American film industry.

He was also honored with ‘Irving G. Thalberg Memorial Award’ by the ‘Academy of Motion Picture Arts and Sciences.’ 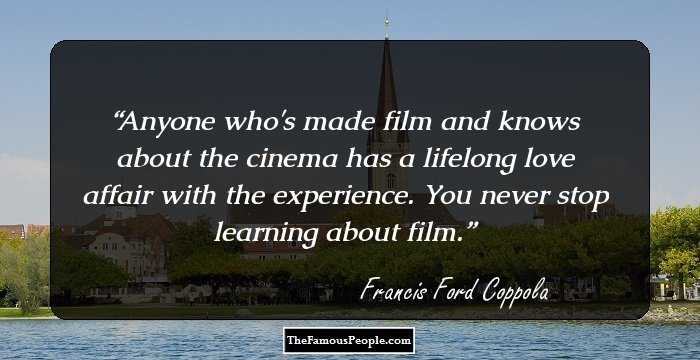 Francis Ford Coppola got married to Eleanor Neil after meeting her on the sets of ‘Dementia 13’ in 1963. The couple has two children: Roman, and Sofia. His son Gian-Carlo died in a car accident at an early age.

This Academy Award-winning director is famous for casting the members of his family in small roles in his movies.