Danica Patrick is an American car racing driver and the first woman to win an ‘IndyCar’ championship event. She is considered one of the most successful women auto racers and was named the ‘Rookie of the Year’ at the 2005 ‘Indianapolis 500’ and the 2005 ‘IndyCar Series’ season. Born in Wisconsin, she began racing at the age of 10 in her hometown. After achieving national success in her teens, she dropped out of high school to advance her racing career. She traveled to England where she raced in ‘Formula Fords’ and was placed second, the best-ever finish for an American in the event. Later, she returned to the United States and signed her first U.S. Indy-car racing contract. Subsequently, she qualified for the ‘Indianapolis 500,’ becoming only the fourth woman to do so in the history of auto car racing. She became the first woman to lead the classic race and led three out of 19 laps, eventually finishing at the fourth position. She joined the ‘Andretti Autosport’ team in 2007. The following year, she secured the first big win of her career and became the first woman to win an ‘IndyCar’ championship event. Apart from being a car racing driver, she is also a model and advertising spokeswoman. Mario Andretti
25th March In History
DID WE MISS SOMEONE?
CLICK HERE AND TELL US
WE'LL MAKE SURE
THEY'RE HERE A.S.A.P
Quick Facts

Danica Patrick was born on March 25, 1982, in Beloit, Wisconsin, USA, to Terry Jose Patrick, Jr., a racer of snowmobiles and midget cars, and his wife Beverly Ann. She has a younger sister named Brooke.

She was raised in Roscoe, Illinois. She studied at ‘Hononegah Community High School’ where she was part of a cheerleading team. She dropped out of high school and attained a GED certification.

At the age of 16, she moved to Milton Keynes, England, in order to advance her racing career. During a three-year period, she competed in ‘Formula Ford’ and ‘Formula Vauxhall.’ She was placed second in Britain's ‘Formula Ford Festival,’ the highest finish by an American in the event.

In 1997, she was a guest of Lyn St. James at the 81st ‘Indianapolis 500’ where she met John Mecom Jr., a former Indy 500-winning team owner. John subsequently began following her career and arranged for her to take part in the ‘Formula Fords’ in the U.K. 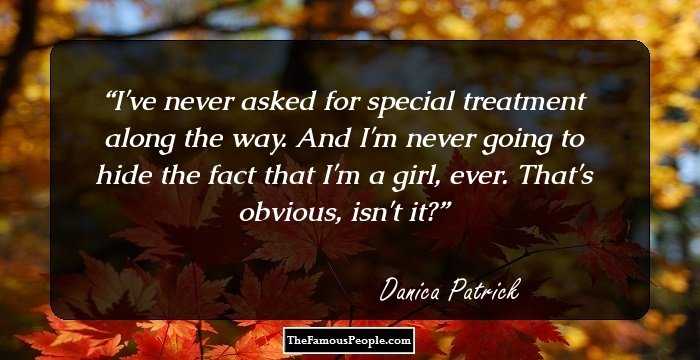 In 2002, Patrick made a deal with ‘Rahal-Letterman Racing’ and achieved moderate success in the next two years. She was a consistent podium finisher but never won a race during that period.

In 2005, she competed in the ‘Indianapolis 500’ and finished fourth, achieving the highest ever finish by a female driver at the ‘Indy 500.’ The same year, she also won her first pole position and became only the second woman to do so in ‘IndyCar Series.’

In 2008, she won at ‘Twin Ring Motegi’ in the ‘Indy Japan 300.’ Overall, she finished the 2008 ‘IndyCar Series’ season in sixth place, the highest championship finish among American drivers for the season.

In 2009, she impressed everybody at the ‘Indianapolis 500’ by finishing third in the event.

In 2011, she competed part-time in the ‘NASCAR Nationwide Series,’ driving for ‘JR Motorsports.’ She finished fourth in Sam's Town ‘300 Nationwide Series Race’ at the ‘Las Vegas Motor Speedway.’

In 2013, she won the pole position at the ‘Daytona 500’ and also became the first woman to ever win a pole in a ‘Sprint Cup’ race. She also drove part-time for ‘Turner Scott Motorsports’ in the ‘Nationwide Series.’

In 2014, she became the second woman to earn a top ten at ‘Atlanta Motor Speedway.’

In 2015, she matched Janet Guthrie’s score of most top tens by a woman in the ‘Sprint Cup’ series. She joined the ‘Stewart-Haas Racing’ for the 2016 season. Unfortunately, the year was marked by crashes and early retirement in races; she even struggled to finish races.

The next year, she had success in the ‘NASCAR Cup Series.’ She also finished fourth at the ‘Advance Auto Parts Clash’ exhibition race at Daytona.

In 2018, she had her last race in NASCAR with ‘Premium Motorsports’ at the 2018 ‘Daytona 500.’ She concluded her race early as she was involved in a six-car accident. She finished her NASCAR career at top ten.

Apart from racing, she has also worked as a television host and model. She posed for the cover of ‘Sports Illustrated,’ and has also featured in advertisements and music videos. She made a cameo appearance in the 2019 action comedy film ‘Charlie’s Angels.’ She has also guest-starred in many television series. 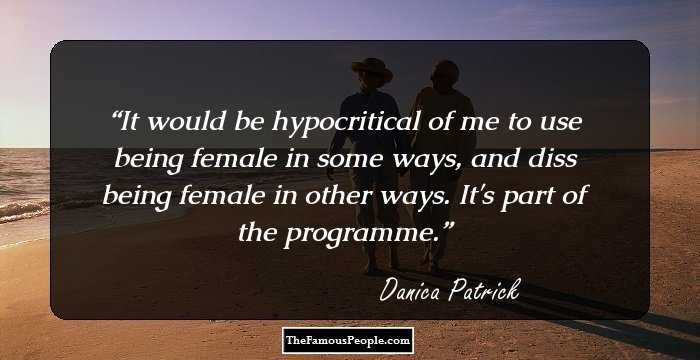 In 2005, Danica Patrick became the fourth woman to race in the ‘Indianapolis 500.’ Her fourth place finish was the highest ever for a female driver. She led three out of 19 laps of the race, becoming the first woman ever to lead the ‘Indy 500.’

In 2006, the ‘March of Dimes’ conferred upon her the title of ‘Sportswoman of the Year’ in recognition of her dedication and success.

In 2008, she created history by becoming the first woman to win an ‘IndyCar’ race.

In 2013, Patrick won the time trials at the ‘Daytona 500’ and became the first woman to win the pole position at the famous NASCAR event.

In 2005, Danica Patrick married Paul Edward Hospenthal, a physical therapist, who helped her recover from a yoga injury. After seven years of marriage, she filed for divorce in January 2013.

In 2012, it was reported that she was dating Ricky Stenhouse Jr., two-time ‘Nationwide Series’ champion. They broke up in 2017. 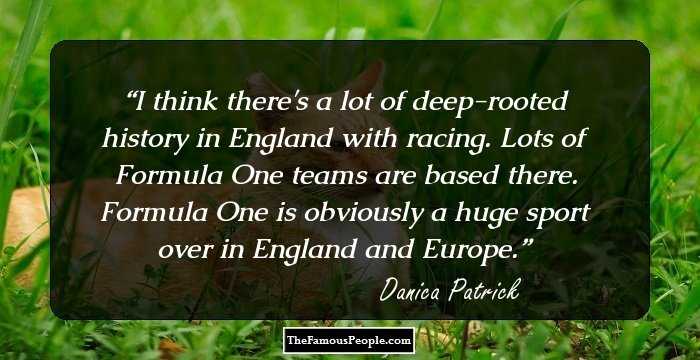 Quotes By Danica Patrick | Quote Of The Day | Top 100 Quotes

See the events in life of Danica Patrick in Chronological Order