Luke Bryan is one of the most renowned singers and songwriters of the this generation. Starting his musical career in the mid-2000s (it was in 2007 that he released his debut album), Bryan did not take long to establish a strong foothold in the music industry. His debut came with his single ‘All My Friends Say’ which was well-received by the audience. He followed it up with his debut studio album ‘I’ll Stay Me.’ After releasing a couple of albums and singles, Bryan tasted worldwide success with his third studio album ‘Tailgates & Tanlines.’ The album peaked at number one on ‘Top Country Albums’ chart and number two on the ‘Billboard 200’ chart. This was the beginning of his success story which continued with the release of his other two albums, ‘Crash My Party’ and ‘Kill the Lights.’ What’s more, Bryan became the only country music artist to achieve six number one singles from one album in the history of ‘Billboard Country Airplay’ chart. Though Bryan has achieved much of his fame as a country musician and singer, it would be wrong to say that he has limited himself to the genre. Bryan has explored other genres like alternative rock as well. He has frequently incorporated elements of other music genres into his music. His journey as a musician and singer has been an inspiring one. Currently, he has sold more than seven million albums, 27 million tracks, and has 16 No.1 hits and back-to-back double-platinum albums. Miley Cyrus
17th July In History
DID WE MISS SOMEONE?
CLICK HERE AND TELL US
WE'LL MAKE SURE
THEY'RE HERE A.S.A.P
Quick Facts

At the age of nineteen, Luke was to move to Nashville. However, tragedy struck his family as his elder brother Chris was killed in a car accident. Bryan could not leave his family in such an emotional state and instead enrolled at the ‘Georgia Southern University’ in Statesboro, Georgia. While at college, he was a member of the ‘Sigma Chi’ fraternity. In 1999, he graduated with a degree in business administration. 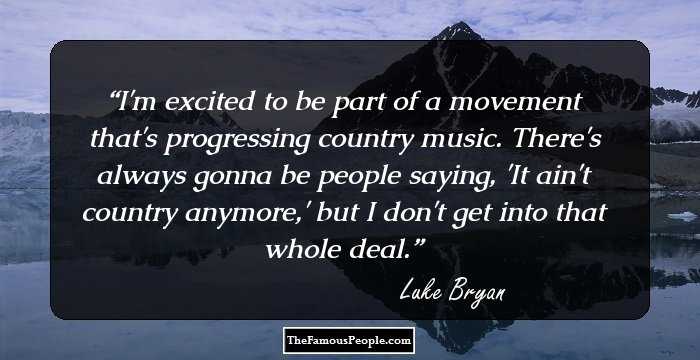 It was only in 2007, that Bryan made it to Nashville, after his father coaxed him to pursue a career in music. Upon reaching Nashville, Bryan joined a publishing house in the city. His first cut was the title track of Travis Tritt's 2004 album ‘My Honky Tonk History.’

Not long after reaching Nashville, Bryan signed a recording contract with ‘Capitol Nashville.’ During this time, he co-wrote Billy Currington’s single ‘Good Directions.’ The song peaked at number one on ‘Hot Country Songs’ chart in 2007.

On March 10, 2009, Bryan released an extended play (EP) titled ‘Spring Break with All My Friends.’ The EP featured two new songs, ‘Sorority Girls’ and ‘Take My Drunk Ass Home.’ It also had an acoustic version of ‘All My Friends Say.’ He followed the EP with his fourth single ‘Do I’ in May 2009. The single became extremely popular and scaled to the number two position on ‘Hot Country Songs’ chart.
In October 2009, Bryan came up with his second album ‘Doin’ My Thing.’ The album comprised of his single ‘Do I’ and a cover of OneRepublic's ‘Apologize.’ He followed it up with two singles, ‘Rain Is a Good Thing’ and ‘Someone Else Calling You Baby,’ both of which shot to number one position on the country music charts.
On February 26, 2010, Bryan released his second EP ‘Spring Break 2...Hangover Edition,’ which featured three new songs, namely ‘Wild Weekend,’ ‘Cold Beer Drinker,’ and ‘I'm Hungover.’
Exactly a year after his second EP, Bryan released his third EP ‘Spring Break 3...It's a Shore Thing’ on February 25, 2011. The EP featured four new songs, namely ‘In Love With the Girl,’ ‘If You Ain't Here to Party,’ ‘Shore Thing,’ and ‘Love In a College Town.’
On March 14, 2011, Bryan followed his third EP with his seventh single ‘Country Girl (Shake It For Me).’ It peaked at number four on the country music charts and number 22 on ‘Billboard Hot 100’ chart.
He released his third studio album ‘Tailgates & Tanlines’ in August 2011. The album peaked at number one on ‘Top Country Albums’ chart and number two on ‘Billboard 200’ chart. All of its three new singles ‘I Don't Want This Night to End,’ ‘Drunk on You,’ and ‘Kiss Tomorrow Goodbye’ reached number one positions on country music charts.
Continue Reading Below
In March 2012, Bryan came up with his fourth ‘Spring Break’ EP, ‘Spring Break 4...Suntan City.’ The EP included new songs, namely ‘Spring Break-Up,’ ‘Little Bit Later On,’ and ‘Shake the Sand.’

In January 2013, Bryan announced his first compilation album ‘Spring Break...Here to Party,’ which included 14 songs of which only two were new tracks. The rest 12 were from his previous ‘Spring Break’ EPs. The album peaked at number one on both ‘Billboard Top Country Albums’ chart and ‘Billboard 200’ chart, becoming the first album of his career to top the all-genre album chart.

In August 2013, Bryan came up with his fourth studio album ‘Crash My Party.’ Its title track peaked at number one on ‘Country Airplay’ chart in July 2013. Its second single ‘That's My Kind of Night’ peaked at number one on ‘Hot Country Songs’ chart and at number two on ‘Country Airplay’ chart. Its third and fourth singles ‘Drink A Beer’ and ‘Play It Again’ repeated the grand success of its predecessors and peaked at number one on both the charts. He then followed them up with the equally successful fifth and sixth singles, ‘That Is How We Roll’ and ‘I See You,’ respectively.
In March 2014, Bryan came up with his sixth EP ‘Spring Break 6...Like We Ain't Ever.’ He followed it up with his last ‘Spring Break’ EP ‘Spring Break...Checking Out’ which released in March 2015. The EP included six tracks from the previous year's EP and five original tracks.
In May 2015, Bryan came up with his fifth studio album ‘Kill the Lights.’ The album outperformed Dr Dre’s ‘Compton’ to debut at number one on ‘Billboard 200’ chart. All the six singles from the album reached number one positions on ‘Billboard Country Airplay’ chart, making Bryan the first artist in the 27-year-history of the chart to achieve six number one singles from one album.
In 2016, Bryan became one of the 30 artists to perform ‘Forever Country,’ a mash-up track of ‘Take Me Home, Country Roads,’ ‘On the Road Again,’ and ‘I Will Always Love You.’
In February 2017, Luke Bryan performed the national anthem at ‘Super Bowl LI’ at ‘NRG Stadium’ in Houston, Texas.
His sixth album ‘What Makes You Country’ was released on December 8, 2017. In 2019, Bryan appeared as a judge in ‘American Idol’ along with Katy Perry and Lionel Richie. The same year, he also released his album ‘Knockin' Boots.’ 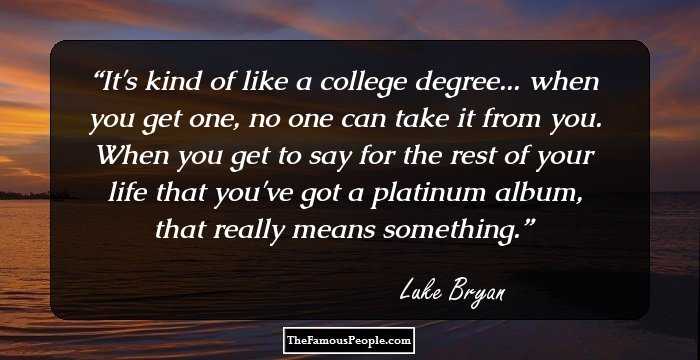 Quotes: You, Life, Like
Continue Reading Below
Major Works
The meteoric rise in Luke Bryan’s career kick-started with his third studio album, ‘Tailgates & Tanlines,’ which released in 2011. The album peaked at number one on ‘Top Country Albums’ chart and number two on ‘Billboard 200’ chart. Its singles reached number one positions on the country music charts, thus starting a legacy which carried on with the release of his fourth and fifth studio albums.
His fourth album ‘Crash My Party’ came at a time when Bryan’s career was at its peak. All the singles from the album were extremely successful, peaking at number one positions on Billboard’s ‘Hot Country Songs’ and ‘Country Airplay’ charts. He also became the first country music artist to release an album of six number one singles that peaked at top positions on Billboard's ‘Hot Country Songs’ and ‘Country Airplay’ charts.
Bryan’s 2015 album ‘Kill the Lights’ was also successful. The album consisted of six new singles, all of which reached number one positions on ‘Billboard Country Airplay’ chart, making Bryan the first artist in the 27-year-history of the chart to achieve six number one singles from one album.
Awards & Achievements
In 2010, Luke Bryan won the ‘Academy of Country Music Award’ for ‘Top New Solo Vocalist’ and ‘Top New Artist.’
His single ‘I Don’t Want This Night To End’ from the album ‘Tailgates & Tanlines’ earned him several awards at ‘American Country Music Awards;’ few of which include ‘Best Single,’ ‘Best Music Video,’ and ‘Most Played Radio Track.’ ‘Tailgates & Tanlines’ was recognized as the ‘Best Album of the Year.’
In 2013, ‘Billboard Music Awards’ named his album ‘Crash My Party’ the ‘Top Country Album.’ The titular single was ranked as the ‘Top Country Song.’
He has won the ‘Artist of the Year’ award a couple of times at various award shows, including ‘American Country Countdown Awards,’ ‘American Music Awards,’ ‘Billboard Music Awards,’ and so on. 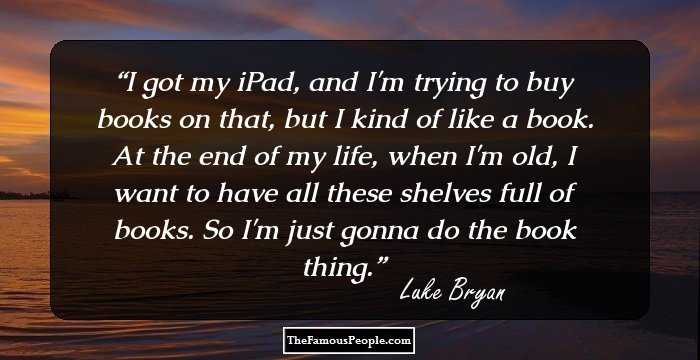 Luke Bryan married his college sweetheart Caroline Boyer on December 8, 2006. He first met her at ‘Georgia Southern University.’ The couple has two sons, Thomas ‘Bo’ Boyer Bryan and Tatum ‘Tate’ Christopher Bryan. He started taking care of his nephew Tilden (Till) following the death of his sister and brother-in-law. He also takes care of his nieces, Kris and Jordan.

He has a passion for hunting. He co-owns ‘Buck Commander,’ a sister company of ‘Duck Commander.’ It even initiated a TV show for hunting enthusiasts.
Bryan has supported numerous charities and causes, including the ‘City of Hope’ and ‘Red Cross.’ Bryan supports children's disaster relief, health, and human rights, and fights against HIV and cancer.

See the events in life of Luke Bryan in Chronological Order