Luis Alfonso Rodríguez López-Cepero, popularly known as Luis Fonsi, is a Puerto Rican singer and songwriter who shot to stardom with his world famous Spanish song ‘Despacito’. He won four Latin Grammy Awards for the song. Interested in music from a young age, he always knew that he was meant to be a singer. As a child, he joined a local children's choir. He later attended the Florida State University School of Music to study music on a scholarship. The university's choir gave him the opportunity to travel and perform across the world. However, he did not stay to complete his course and eventually dropped to pursue a career in music. His debut album ‘Comenzaré’ (I Will Begin) was a smashing hit which established his career. After releasing many other studio albums in the ensuing years, he shot to worldwide stardom in 2017 with the song ‘Despacito’, which topped the charts in around 50 countries and received an overwhelming run on the US Top 40. At one point of time, it was the most streamed song and the most watched video ever on YouTube, with five billion views received by May 2018. Roselyn Sánchez
15th April In History
DID WE MISS SOMEONE?
CLICK HERE AND TELL US
WE'LL MAKE SURE
THEY'RE HERE A.S.A.P
Quick Facts

Puerto Rican People
Puerto Rican Men
Florida State University
Aries Singers
Male Singers
Childhood & Early Life
Luis Fonsi was born on April 15, 1978 in San Juan, Puerto Rico, to Alfonso Rodríguez and Delia ‘Tata’ López-Cepero. He has two younger siblings, Tatiana Rodríguez, and Jean Rodríguez, who also became a singer.
From his childhood, he displayed a strong liking for music and was fascinated by the popular group Menudo. He also joined the San Juan Children's Choir.
He attended Dr. Phillips High School in Orlando, Florida, and was a part of a music group called ‘Big Guys’. In 1995, he joined the Florida State University School of Music on a scholarship with a major in vocal performance.
He joined the school's choir, the Florida State University Singers and availed the opportunity to travel to different parts of the world and perform. During that time, he recorded some demo tapes in Miami and soon Universal Music Latin offered him a recording contract.
Continue Reading Below
Career
In 1998, Luis Fonsi released his debut album, ‘Comenzaré’ (I Will Begin), which was almost an overnight hit in Puerto Rico and across Latin America. The album contained the singles ‘Perdóname’, ‘Si Tú Quisieras’, ‘Dime Como’, and ‘Me Iré’.
On June 20, 2000, he released his second studio album ‘Eterno’, which was also a hit. It peaked at number 6 on Billboard Top Latin Albums. Its single, ‘Imaginame Sin Ti’ peaked at number 1 on Billboard Hot Latin Tracks.
On May 1, 2000, he performed at the Great Jubilee Concert for a Debt-Free World, which was attended by Pope John Paul II. The same year, Fonsi composed a song for Puerto Rican singer Ednita Nazario, which won a Latin Grammy Award.
On March 12, 2002, Universal Music Latino released his third studio album ‘Amor Secreto’ (Secret Love). In the same year, he released his first English album ‘Fight the Feeling’ and attempted a crossover with the single, ‘Secret’. That year, he also performed the opening act at Britney Spears' Dream within a Dream concerts in the US and Mexico.
His fifth album ‘Abrazar la Vida’ was released on October 28, 2003. The album peaked at number 3 on Billboard Top Latin Albums and was certified platinum (Latin) by RIAA. In the same year, he performed at Miss World 2003 in China, watched by millions of viewers across the world.
He recorded ‘Amazing’ with British singer Emma Bunton of the band Spice Girl for her album ‘Free Me’, released in 2004. In the same year, he was featured in the Mexican television serial drama, ‘Corazones al límite’.
His album ‘Paso a Paso’ was launched in 2005. It was certified Disco De Platino for shipments of 200,000 units in the United States. The single from the album ‘Nada Es Para Siempre’ peaked at number one on the music charts and earned a nomination for the Latin Grammy Awards.
The year 2017 became his breakthrough year when he released his single ‘Despacito’ which featured Daddy Yankee. The single was initially released entirely in Spanish and was a major hit in countries where Spanish is the predominant language.
In April 2017, Canadian singer Justin Bieber did an English remix of the song, singing in both English and Spanish. Upon the release of the remix, the track began to climb up the charts in the US, the UK, and many other nations.
Eventually, the remix reached number 1 on the US Billboard Hot 100 for the week. It also became Fonsi’s first number 1 on the chart. The song remained number 1 for 16 consecutive weeks.
In November 2017, he released a new song ‘Échame la Culpa’, which debuted at number 3 on the Hot Latin chart.
Major Works
Fonsi’s album ‘Comenzaré’ peaked at number 27 on Billboard's Top Latin Albums chart. It sold 100,000 copies and was certified platinum by RIAA. The album sold very well in Colombia, the Dominican Republic, El Salvador, Mexico and Venezuela.
His album ‘Amor Secreto’ peaked at number 1 on Billboard Top Latin Albums and its single ‘Quisiera Poder Olvidarme De Tí’ peaked at number 1 on Billboard Hot Latin Tracks. The single was also certified platinum (Latin) by RIAA.
His Spanish single ‘Despacito’ became a smashing hit. Its video, as of May 2018, had reached five billion views on YouTube. The song claimed the number 1 position in almost every Latin Billboard chart and also became the most viewed video in the world.
Personal Life
In 2003, Luis Fonsi started liking the actress Adamari López, who was also a Puerto Rican. In 2005, he cancelled an international tour in the midway after he came to know that López was diagnosed with cancer. He traveled with her to Mexico, Miami, and Puerto Rico for her treatments and work-related commitments.
Fonsi was then romantically linked to Spanish model Águeda López. Their daughter Mikaela was born in December 2011. The couple got married on September 10, 2014, after living together for three years.Their son Rocco was born on December 20, 2016.
Trivia
The ‘Despacito’ video was shot in La Perla, a Puerto Rican slum that was struck by Hurricane Maria. Fonsi wanted to help in rebuilding the area and started a relief fund.

See the events in life of Luis Fonsi in Chronological Order 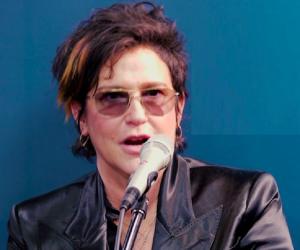