Billy Joe Armstrong is an American singer, songwriter, musician and guitarist. His interest in music developed from a very young age. His father was a jazz musician and bought him his first guitar and thus his tryst with music began. When he was five-year-old, he recorded his first song ‘Look for Love’. He learnt to play the guitar from George Cole for almost ten years. He also learned to play the drums, piano, harmonica and mandolin. He formed a band called,‘Sweet Children’ along with childhood friend Mike Dirnt. Two years later, they formed the band ‘Green Day’ along with other friends. ‘Green Day’s’ most famous hit is the rock opera, ‘American Idiot’ which fetched them many awards and was also made into a Broadway musical in which Armstrong himself acted. ‘Green Day’s’ other albums include ‘Kerplunk’ and ‘Dookie’. He has penned the lyrics for a number of songs,for singers like Penelope Houston and bands like ‘Rancid’as well as‘The Go-Go’s’. He is the co-owner of the recording company, ‘Adeline Records’. American People
Punk Singers
Rock Singers
Lyricists & Songwriters
American Men
Childhood & Early Life
Billie Joe Armstrong was born on February 17, 1972, in Oakland, California, to Andrew Armstrong and Ollie Jackson. His father was a jazz musician and also worked as a truck driver. His mother worked at a restaurant. He grew up in Rodeo, California.
He was the youngest of six siblings. His siblings were David, Alan, Marci, Hollie, and Anna. His interest in music began after his brothers introduced him to punk music.
He attended Hillcrest Elementary School in Rodeo. At the age of five, his teacher encouraged him to record a song titled, ‘Look for Love’.
When he was 10, he met Mike Dirnt in the school. They became close friends owing to their love of music. He was highly influenced by the bands ‘The Replacements’ and ‘Hüsker Dü’.
His father died of esophageal cancer in 1982. The song ‘Wake Me Up When September Ends’ is dedicated to his father. After his father’s death, his mother married again.
His first guitar was a Cherry Red Hohner acoustic, which his father bought for him. His mother bought him his first electric guitar from George Cole when he was eleven. He named it ‘Blue’.
He attended Carquinez Middle School and John Swett High School in Crockett and later Pinole Valley High School. He dropped out of school on his 18th birthday to pursue his musical career. 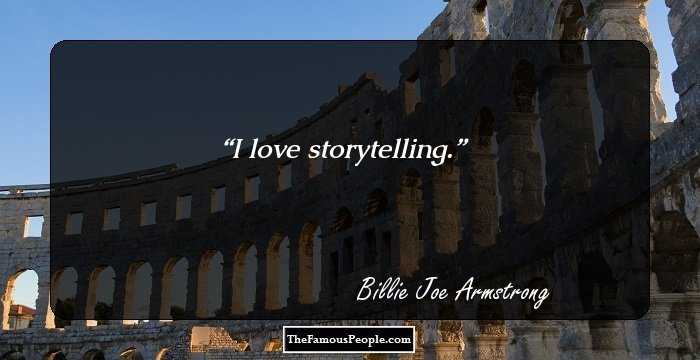 Quotes: Love, I
Continue Reading Below
Career
In 1987, he along with his childhood friend Mike Dirnt formed a band, ‘Sweet Children’. They played the guitar while John Kiffmeyer played the drums and Sean Hughes was on bass.
After Hughes left the band, Dirnt started playing the bass. In April 1989 they renamed their band as ‘Green Day’,owing to their addiction to marijuana.
In 1989, they released their debut EP ‘1,000 Hours’. Their debut studio album ‘39/Smooth’ and the extended play,‘Slappy’ was recorded the next year. The compilation ‘1,039/Smoothed Out Slappy Hours’ included both albums.
‘Tré Cool replaced Sobrante as Green Day's drummer and made his debut with their second album, ‘Kerplunk’. The band broke into mainstream with their next album, ‘Dookie’ in 1994, selling over 60 million records worldwide.
Armstrong co-wrote songs with various artists. Some of them being ‘Unforgiven’ for the all-female American rock band “The Go-Go's”, ‘The Angel and The Jerk’ and ‘New Day’ for Penelope Houston and ‘Radio’ with the American punk rock band “Rancid”.
Apart from producing album for ‘The Riverdales’, he has also been associated with a project, ‘The Network’ responsible for the release of the album ‘Money Money 2020’ on Adeline Records which is co-owned by him.
In 2010, he became a part of the ‘American Idiot’ for one week and played the role of St. Jimmy. The same year the band which his son was associated with released an album with Adeline Records and Armstrong's musical production.
In 2013, he worked with the group ‘Lonely Island’for their song ‘I Run NY’of ‘The Wack Album’. He is now busy shooting for Frank Whaley's movie ‘Like Sunday, Like Rain’ alongside Leighton Meester.
In 2014, he wrote songs for 'These Paper Bullets', an adaptation of the Shakespeare's comedic play Much Ado About Nothing, with rock-and-roll music.
Continue Reading Below 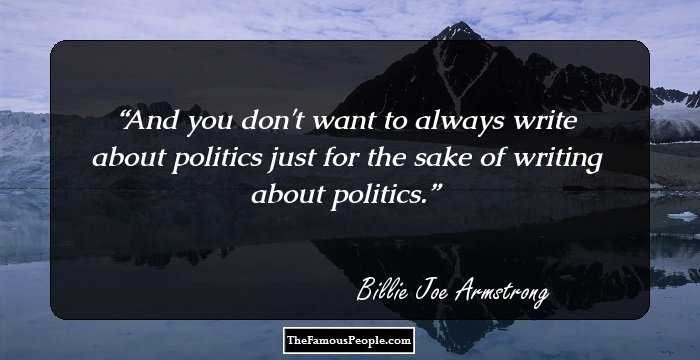 Quotes: You
Major Works
In 2004, Armstrong’s ‘Green Day’ released their first rock opera, ‘American Idiot’. It sold over 15,000,000 copies and featured hit singles like ‘American Idiot’, ‘Boulevard of Broken Dreams’ and ‘Wake Me Up When September Ends’.
In 2009, his band published their second rock opera called ‘21st Century Breakdown’. It was also a huge commercial success and the band shot to great fame.
Awards & Achievements
‘Green Day’ has won five Grammy Awards, one for ‘Best Rock Album’ for ‘American Idiot’ and ‘21stCentury Breakdown’, ‘Record of the Year’ for ‘Boulevard of Broken Dreams’, ‘Best Alternative Music Album’ for ‘Dookie’ and ‘Best Musical Show Album’ for ‘American Idiot: The Original Broadway Cast Recording’.
For ‘American Idiot’ the band was awarded ‘American Music Awards’ for ‘Favourite Pop/Rock Album’ in 2005.
‘Kerrang!’ magazine included Armstrong in their 2008 list of ‘50 Sexiest People in Rock’.
In 2011, he was named the ‘Best Punk Rock Singer’ by ‘IMDb’. 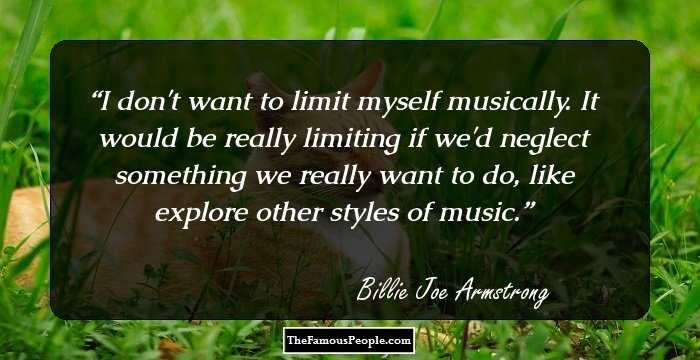 Quotes: Like, Music, I
Personal Life & Legacy
He married Adrienne Nesser on July 2, 1994, whom he met earlier during one of his performances. They have two sons, Joseph Marciano Armstrong and Jakob Danger Armstrong.
Trivia
This famous singer was not allowed to travel on a Southwest Airlines flight for wearing his pants too low, in 2011.