Lucy Liu is an American actress, voice actress, director, producer, and singer. An attractive and intelligent actress, she serves as an inspiration to many Asian actors who aspire to make it big in Hollywood. Following a string of early appearances in some popular series, she achieved fame when she joined the cast of the legal comedy series ‘Ally McBeal’ where she played the malicious ‘Ling Woo.’ The actress translated her sudden popularity into big screen roles in films, such as ‘Shanghai Noon’ and ‘Charlie’s Angels.’ She then delivered a superlative performance as Japanese crime lord ‘O-Ren Ishii’ in Quentin Tarantino’s ‘Kill Bill, Volume 1.’ Around the same time, she also played lead roles in some box office failures, such as ‘Rise: Blood Hunter.’ She then started voicing prominent characters in animated films, such as ‘Kung Fu Panda’ and ‘Tinker Bell.’ Small screen roles, such as ‘Mia Mason’ in ‘Cashmere Mafia’ failed to produce results. A recurring role in the critically acclaimed police drama series ‘Southland’ helped re-establish herself as a prominent actress. Liu chooses her roles with utmost care so as to avoid being typecast in a competitive industry. Though she has embraced her roots, she has not allowed it to limit her as an artist. American People
American Women
New Yorkers Actresses
New York University
University Of Michigan
Childhood & Early Life
Lucy Liu was born Lucy Alexis Liu Yu Ling on December 2, 1968, in Jackson Heights, Queens, New York, USA. The youngest of three children, Lucy was born to biochemist Cecilia and Tom Liu. Her father, a trained engineer, sold digital clock pens to make a living.
Her older siblings are John and Jenny. She attended ‘Joseph Pulitzer Middle School,’ and graduated from ‘Stuyvesant High School’ in 1986. At ‘Stuyvesant High,’ she went to Singapore on an exchange program.
She enrolled at the ‘New York University,’ and transferred to the ‘University of Michigan’ where she was a member of the ‘Chi Omega’ sorority. She earned a bachelor’s degree in Asian languages and cultures. 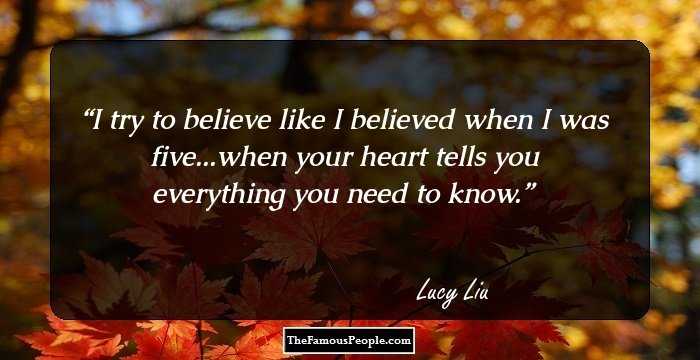 Quotes: You, Like, Heart, Believe, Need, I
Continue Reading Below
Career & Later Life
Liu began her acting career in 1989, after auditioning for a supporting role in the University of Michigan’s production of ‘Alice in Wonderland’ during senior year. She won the lead role despite being of Asian origin.
After small roles in films and TV, she was cast as ‘Ling Woo,’ a Chinese American lawyer, in the 1997 comedy-drama series ‘Ally McBeal.’ Over a period of time, Liu became a permanent cast member.
In ‘Payback,’ a 1999 crime thriller, she portrayed ‘Pearl,’ a high-class BDSM prostitute associated with the Chinese mafia.
In 2000, she essayed the role of ‘Princess Pei-Pei’ in ‘Shanghai Noon,’ an American martial arts action comedy western film, starring Jackie Chan and Owen Wilson. The film was well-received critically and commercially.
In the 2002 film adaptation of the popular Broadway ‘Chicago,’ she played ‘Kitty Baxter,’ a millionaire heiress who briefly outshines the chief characters when she kills her husband and his two mistresses.
In 2003, she reprised her role as ‘Alex Munday’ in ‘Charlie’s Angels: Full Throttle’ which did well at the box office, earning more than $259 million worldwide.
In 2005, she played the role of an FBI criminal psychologist named ‘Taryn Mills’ in Tony Scott's action crime film ‘Domino.’
She starred as a Mandarin black-market blood dealer in ‘3 Needles,’ a 2005 Canadian film, which was not widely released. However, the film impressed viewers at various film festivals, thanks to its gripping interwoven stories of people dealing with HIV and AIDS
Liu tried her hand at production with the well-received documentary ‘Freedom’s Fury’ in 2006. It was about the Melbourne Summer Olympics’ semi-final water polo match between Hungary and the USSR.
Continue Reading Below
She starred as ‘Lindsey’ in the 2006 crime thriller ‘Lucky Number Slevin.’ In the film, her character tries to help the protagonist, played by Josh Hartnett, survive a case of mistaken identity.
Apart from acting, she has also held several gallery shows to showcase her collage, paintings, and photographs. In 2006, she donated the proceedings from her art show to UNICEF.
She was the executive producer of the 2007 film ‘Code Name: The Cleaner’ which starred Cedric the Entertainer and Liu in important roles. It received negative reviews, and could not recover its production budget.
In the neo-noir action-horror 2007 film ‘Rise: Blood Hunter,’ she played a journalist on a quest for revenge against the vampires. The film received negative reviews from the critics.
Her painting ‘Escape’ was incorporated into Montblanc’s ‘Cutting Edge Art Collection.’ It was exhibited during the prestigious ‘Art Basel Miami 2008,’ which showcased works of contemporary American artists.
She starred in ‘Cashmere Mafia,’ an American television comedy-drama, which ran on ABC from January 2008 to February 20, 2008.
She had a recurring role in the critically acclaimed police drama series ‘Southland’ which aired from 2009 to 2013 on various networks. In the series, she played a police officer named ‘Jessica Tang.’ ‘Southland’ received positive reviews from critics.
Soon after, she landed the lead role of ‘Joan Watson’ in the CBS procedural drama series ‘Elementary’ which is based on Sir Arthur Conan Doyle’s famous character, ‘Sherlock Holmes.’ She was cast alongside Johnny Lee Miller and the show aired from September 2012 to August 2019.
n the meantime, she voiced many characters, including ‘Silvermist’ in ‘Tinker Bell’ (2008). She went on to reprise her voice role as ‘Silvermist’ in sequels, such as ‘Tinker Bell and the Lost Treasure’ (2009), ‘Tinker Bell and the Great Fairy Rescue’ (2010), ‘Secret of the Wings’ (2012), ‘The Pirate Fairy’ (2014), and ‘Tinker Bell and the Legend of the NeverBeast’ (2014).
Continue Reading Below
From 2008 to 2018, Lucy mostly concentrated on her voice acting roles in films like ‘Kung Fu Panda’ (2008) as ‘Master Viper’ and ‘Magic Wonderland’ (2014) as ‘Princess Ocean.’
In 2018, she was cast alongside Milla Jovovich and James Franco in the direct-to-video science fiction film ‘Future World.’ She was also part of the romantic comedy ‘Set It Up.’
In 2019, the actress started portraying the lead role of ‘Simone Grove’ in the dark comedy web television series ‘Why Women Kill.’ In 2020, she was seen playing ‘Sienna’ in Thom Fitzgerald's comedy drama film ‘Stage Mother.’ 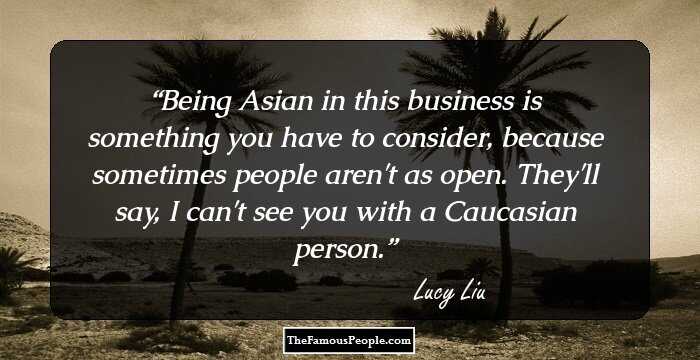 Major Works
She was cast as ‘Alex Munday,’ one of the three angels, in the 2000 movie ‘Charlie’s Angels’ alongside Drew Barrymore and Cameron Diaz. The film earned more than $264 million at the box office.
In Quentin Tarantino’s 2003 action film ‘Kill Bill, Volume 1,’ her sterling performance as Japanese-Chinese-American ‘O-Ren Ishii,’ Queen of the Tokyo underworld and former Deadly Viper Assassination Squad member, won her many awards.
She voiced ‘Silvermist’ in the ‘Tinker Bell’ film series. She also voiced ‘Master Viper’ in ‘Kung Fu Panda,’ ‘Kung Fu Panda 2,’ and ‘Kung Fu Panda: Legends of Awesomeness.’
Awards & Achievements
In 2001, Liu won two ‘Blockbuster Entertainment Awards’: ‘Favorite Action Team (Internet Only)’ for ‘Charlie’s Angels’—shared with Drew Barrymore and Cameron Diaz—and ‘Favorite Supporting Actress – Action’ for ‘Shanghai Noon.’
In 2003, she shared the Broadcast Film Critics Association Awards’ ‘Critics Choice Award’ with 14 others under the ‘Best Acting Ensemble’ category for the film version of ‘Chicago.’
Continue Reading Below
She has won two ‘MTV Movie Awards’: ‘Best Villain’ for ‘Kill Bill: Volume 1’ and ‘Best On-Screen Team’ for ‘Charlie’s Angels.’ The latter was shared with Drew Barrymore and Cameron Diaz.
In 2016, she was named Harvard's ‘Artist of the Year’ and was awarded the Harvard Foundation’s arts medal.
She was honored with a star on the ‘Hollywood Walk of Fame’ in 2019. 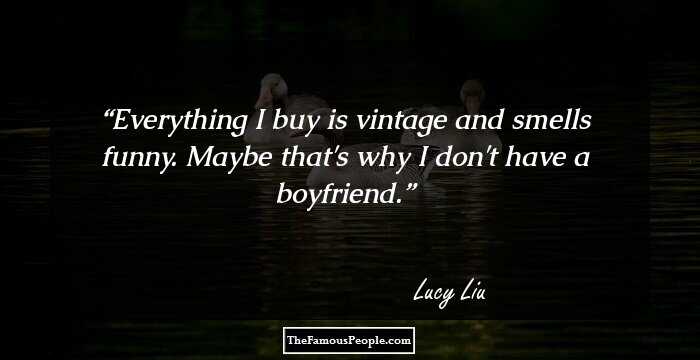 Personal Life & Legacy
In 1991, Liu underwent surgery after a breast cancer scare. A lump, which was later found to be benign, was removed. She has studied various religions, such as Kabbalah, Buddhism, and Taoism.
In 2004, she was appointed an ambassador for U.S. Fund for UNICEF. She traveled to Pakistan and Lesotho among several other countries, and became a spokesperson for the ‘Human Rights Campaign.’
She gave birth to a son via gestational surrogate on August 27, 2015. Her son was named Rockwell Lloyd Liu.
Trivia
This American actress did not learn English until the age of five as her family spoke Mandarin Chinese at home. She can speak six languages, and practices Kali-Eskrima-Silat (knife-and-stick fighting).

See the events in life of Lucy Liu in Chronological Order