Kate Winslet is an English actor, best known for her portrayal of ‘Rose’ in the 1997 American epic romance and disaster film ‘Titanic.’ Many people around the world will never be able to erase their memories of her performance as ‘Hanna Schmitz’ in the spine-tingling Academy Award-winning movie, ‘The Reader.’ One of the most popular actors in Hollywood, Kate Winslet achieved colossal success in less than a decade. She has won a number of awards and distinguished honors for her extensive contribution to world cinema. She has also managed to draw positive comments from critics and audiences from around the world. Some of her memorable films include ‘Titanic,’ ‘Eternal Sunshine of the Spotless Mind,’ ‘Finding Neverland,’ ‘The Reader,’ ‘Quills,’ ‘Iris,’ ‘The Holiday,’ and ‘Flushed Away.’ Apart from her acting career, she has also achieved international recognition for her mezzo-soprano voice, which she used for the film ‘Christmas Carol: The Movie.’ Although many link Winslet with her unforgettable roles in movies, she has also been in the limelight for her relationships with Jim Threapleton, Sam Mendes, and Ned Rocknroll. British People
British Women
Libra Actresses
British Actresses
Actresses Who Are In Their 40s
Childhood & Early Life
Kate Elizabeth Winslet was born on 5 October 1975, in Reading, Berkshire, England, to Sally Anne and Roger John Winslet. She was the second of the four children, born to her parents.
She started studying drama at the age of 11 at ‘Redroofs Theatre School,’ where she was made the head girl. She appeared in her first television advertisement for ‘Sugar Puffs’ at the age of 12.
In 1988, she appeared in the TV series ‘Shrinks.’ Three years later, she dropped out of school to pursue her acting career. She soon began appearing in theater productions, such as ‘Adrian Mole,’ ‘Peter Pan,’ and the sitcom ‘Get Back.’
In 1994, she landed her debut film role in a feature film titled ‘Heavenly Creatures’ which was directed by Peter Jackson. She caught the attention of many and received praise for her acting skills when she starred in ‘Sense and Sensibility,’ which released in 1995. 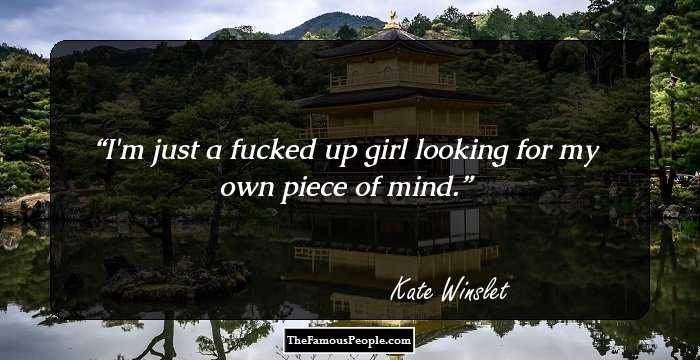 Continue Reading Below
Career
In 1996, she was seen in movies, such as ‘Jude’ and ‘Hamlet.’ Although the movies didn't succeed at the box office, her performances were critically acclaimed.
In 1997, she was seen as an upper-class socialite passenger on the ill-fated ‘RMS Titanic’ in the movie ‘Titanic.’ Her portrayal of ‘Rose’ turned out to be one of her most memorable performances. She was nominated for a number of high-profile awards and went on to earn several honors for her performance.
In 1998, she was seen in a film titled ‘Hideous Kinky’ which she had started filming before ‘Titanic.’ The next year, she was seen in ‘Holy Smoke!,’ which was a low-budget project.
She was cast opposite Geoffrey Rush in ‘Quills’ which released in 2000. This period drama film was inspired by the life and works of Marquis de Sade, and was praised by the critics. The next year, she appeared as a World War II code-breaker in ‘Enigma.’
In 2001, she also voiced the character of ‘Belle’ in the animated film ‘Christmas Carol: The Movie.’ She also recorded a hit single titled ‘What If’ which was used in the movie. Two years later, she starred in ‘The Life of David Gale.’
From 2004 to 2006, she appeared in a number of critically-acclaimed films, including ‘Eternal Sunshine of the Spotless Mind,’ ‘Finding Neverland,’ ‘Romance & Cigarettes,’ ‘All the King’s Men,’ ‘Little Children,’ and ‘The Holiday.’ These films were also some of her most commercially successful films after ‘Titanic.’
She was once again seen with her ‘Titanic’ co-star Leonardo DiCaprio in the film ‘Revolutionary Road’ which released in 2008. Though the film had created much hype before its release, it received tepid reviews. She then went on to star in the Academy Award-winning film ‘The Reader.’ Her portrayal of ‘Hanna Schmitz’ in the film is considered to be one of her best performances.
In 2011, she starred in the ‘HBO’ miniseries ‘Mildred Pierce’ where she played the title character. She won a number of distinguished awards for her performance. The same year, she appeared in the film ‘Contagion,’ alongside Matt Damon and Gwyneth Paltrow. She also appeared in ‘Carnage,’ which opened at the 68th ‘Venice Film Festival.’
In 2012, she performed an audiobook recording of the novel ‘Thérèse Raquin,’ which released on ‘audible.com.’
Continue Reading Below
In 2013, she was seen in a multi-starrer titled ‘Movie 43,’ which involved 14 different storylines directed by different directors. The segment she appeared in was called ‘The Catch.’ ‘Movie 43’ was considered one of her worst films in her career.
In 2014, she appeared in ‘A Little Chaos’ and ‘Divergent.’ The following year, she played ‘Myrtle 'Tilly' Dunnage’ in the Australian revenge comedy-drama film ‘The Dressmaker.’
In 2015, she also narrated the television film ‘Snow Chick.’ From 2015 to 2017, she was seen in many movies, such as ‘Steve Jobs,’ ‘Triple 9,’ ‘The Mountain Between Us,’ and ‘Wonder Wheel.’
She voiced ‘Madame Mumblechook’ in a Japanese animated fantasy film titled ‘Mary and the Witch's Flower’ in 2017. The same year, she was cast to play ‘Ronal’ in the science fiction film ‘Avatar 2.’
In 2018, she was cast to play ‘Mary Anning’ in the British-Australian romantic drama film ‘Ammonite.’ In 2019, Winslet was cast to play a prominent role in the American-German comedy-drama film ‘The French Dispatch.’ 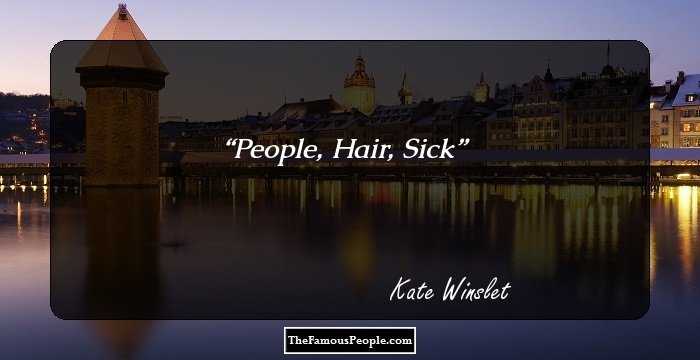 Major Works
In 1997, she was cast as ‘Rose DeWitt Bukater,’ a 17-year-old first-class passenger on ‘RMS Titanic’ in James Cameron’s ‘Titanic.’ She played the love interest of Jack Dawson, played by Leonardo DiCaprio, who is a third-class passenger. The movie is considered to be one of her biggest commercial successes to date.
She was cast in ‘The Reader’ which released in 2008. She played the role of ‘Hannah Schmitz,’ a woman who goes through a war trial, while hiding a horrendous Nazi past and her scandalous affair with a young boy. For the role, she earned an ‘Academy Award’ for ‘Best Actress.’
Awards & Achievements
She won a ‘Grammy Award’ for ‘Best Spoken Word Album for Children’ for ‘Listen to the Storyteller’ in 1999.
Continue Reading Below
In 2001, she won the ‘Los Angeles Film Critics Association Award’ for ‘Best Supporting Actress’ for her performance in ‘Iris.’
She won an ‘Academy Award’ for ‘Best Actress’ for ‘The Reader’ in 2008.
She won two ‘Golden Globe Awards’ under the ‘Best Actress (Drama)’ and ‘Best Supporting Actress’ categories for ‘Revolutionary Road’ in 2008.
In 2011, she won a ‘Primetime Emmy Award’ for ‘Outstanding Lead Actress in a Miniseries or a Movie’ for the television show ‘Mildred Pierce.’
In 2011, she received the ‘Yo Dona Award’ for ‘Best Humanitarian Work.’
She was made a ‘Commander of the Order of the British Empire’ in 2012 for her contributions to drama. 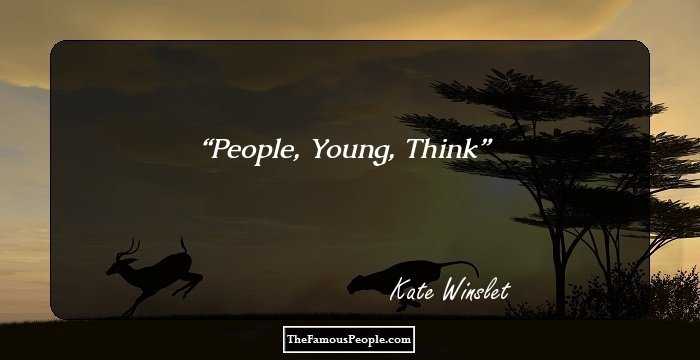 Personal Life & Legacy
She was dating Stephen Tredre for four-and-a-half years before he passed away due to bone cancer. His death coincided with the premiere of ‘Titanic.’ She could not attend the premiere as she had to attend his funeral.
In 1998, she married Jim Threapleton with whom she has a daughter named Mia. Threapleton and Winslet divorced in 2001.

In 2003, she married director Sam Mendes with whom she has a son named Joe. Winslet and Mendes split in 2010.

In 2011, the residence, which she was staying in, caught on fire. Though it caused a lot of damage to the property, there were no casualties. Around the same time, she met fellow guest Ned Rocknroll with whom she started a relationship.

She married Ned Rocknroll in a private ceremony in 2012. The couple has a son named Bear.

Apart from being an actor, she is also a ‘PETA’ activist. She is also the founder of a non-profit organization called ‘Golden Hat Foundation.’
Trivia
Kate Winslet is the third actor in history to win two ‘Golden Globes’ in the same year. She won the awards for her performances in ‘Revolutionary Road’ and ‘The Reader.’

Quotes By Kate Winslet | Quote Of The Day | Top 100 Quotes

See the events in life of Kate Winslet in Chronological Order