(Actress and Dancer Known for Her One-Woman Show 'Lena Horne: The Lady and Her Music')

Advanced Search
Lena Mary Calhoun Horne was a woman of versatile talents who wowed audiences with her skills as a dancer and singer; while on the other hand she made her mark in Bollywood as an actress of rare quality. Apart from being a famous entertainer she also went on to become one of the most important civil rights activists in the United States of America during her lifetime and did a lot in order to elevate the situation of African Americans. Although it is true that Horne’s personal views, political inclinations and activism put her at odds with the established big hitters of the entertainment industry of her time; she did not let it bog her down and continued to be continued to work for upliftment of the people of colour across America. She worked in various shows on television, films and also in plays at some of the leading theatres of the time throughout a career that stretched over a period of seven decades in total. She became the first African American to be a part of the roster of a major studio in Hollywood and that opened the gates for plenty of new talents from the community. Read on to know more about her life and works. American Celebrities
Actresses
Black Singers
Black Actresses
Black Film & Theater Personalities
Childhood & Early Life
Born on June 30, 1917 Lena Horne was the daughter of Edwin Fletcher Horne Junior and Edna Louise Scrotton in Bedford-Stuyvesant, Brooklyn. Her father ran a gambling operation and was well off while her mother worked as a theatre actress who performed at theatres all over the United States.
In the year 1920, when Lena Home was only a child of 3, her father left the house and although there was no financial strife, the estrangement with her father at such a young age was an unpleasant experience. She moved in with her grandparents since her mother was a frequent traveller.
From the age of 5 onwards she started living with different relatives; starting with his mother in Georgia and then from the age of 10 till 12 she stayed with Frank Horne, her uncle. Her uncle, who went on to serve as the advisor of Franklin Roosevelt was an early influence on the young Lena.
At the age of 12 in 1929, Horne moved to New York with his mother and attended a school in Brooklyn which was simply named the ‘Girls High School’. She did not complete school and discontinued her formal education at the age of 18. 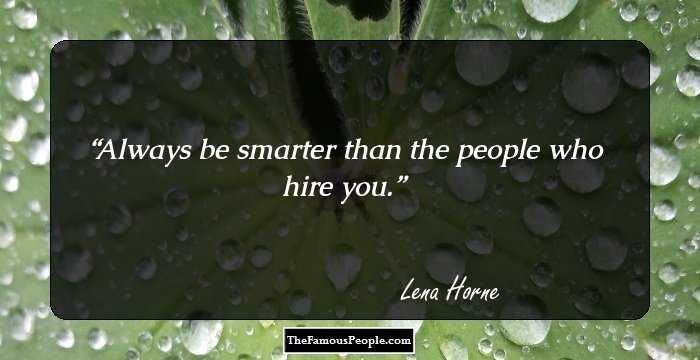 Quotes: You
Continue Reading Below
Career
In the year 1934, Lena Horne got her first break as an actress when she was able to land a role for the ‘Cotton Club Parade’. Actress and singer Adelaide Hall, who was also a part of the project, became her earliest mentor in the industry.
In the year 1938 she was featured in a musical known as ‘The Duke in Tops’, however it was a production made on a low budget and did not much further her career as an actress. Two years later she featured in shorter movie known as ‘Boogie Woogie Dream’.
In 1942, she got her big break when she got the job of being a singer at a famous Hollywood nightclub named ‘Felix Young Little Trot’. During her time there she became well known among the power brokers of Hollywood.
Lena hit the big time when she signed a contract with Hollywood heavyweights ‘Metro-Goldwyn- Mayer’ in the year 1943. It was indeed a momentous occasion as Horne became the first black person to have represented a Hollywood studio of that size.
Throughout the 1940s the budding actress starred in plenty of famous movies for MGM and also worked for ‘20th Century Fox’ after being granted permission by her employers at MGM. Her success as an actress was also recognised when she became a member of the board of the ‘Screen Actors Guild’.
Lena became a member of the ‘Progressive Citizens of America’ that was a group known for left wing views and that got her black listed from further work in the movies in the early 1950s. However, she continued to work in nightclubs as an entertainer till the ban was lifted in 1956.
She was also a member of the ‘National Association for the Advancement of Colored People’ and was a major face of the civil rights movement in the country at the time. In the year 1963, she participated in a civil rights march in Washington.
In the year 1978, Horne finally bade goodbye to her career as an actress with the film ‘The Wiz’ in which she starred alongside such stars as Diana Ross and Michael Jackson. It is worthwhile to not that it was also one of those rare movies in which the entire cast consisted of African Americans. 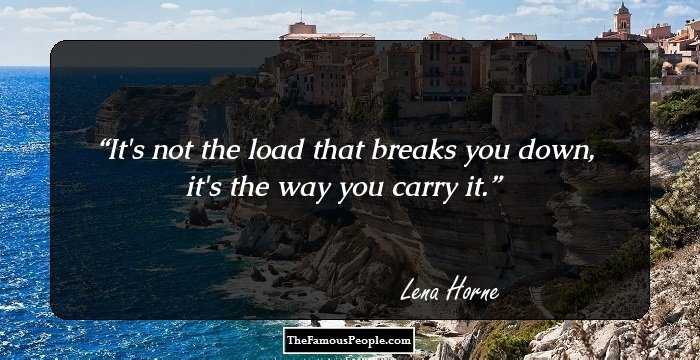 Quotes: You
Major Works
Although she had an outstanding career in Hollywood, it was much later in life that she produced her best work. In the year 1981, she produced the Broadway show ‘Lena Horne: The Lady and Her Music’ which went on to win several awards and was extremely successful for more than a year.
Personal Life & Legacy
In the year 1937, Lena married Luis Jordan Jones at the age of 20 and the couple was blessed with a daughter named Gail and a son named Edwin. The daughter went on to become writer. The couple got divorced in the year 1944.
Three years after her first marriage ended in divorce, Lena got married for the second time to music director Lennie Hayton in 1947. They had no children and the couple separated after 15 years of marriage.
She died on May 9, 2010 in her home in New York. Horne will forever be remembered as one of the institutions of American entertainment and civil rights movement. 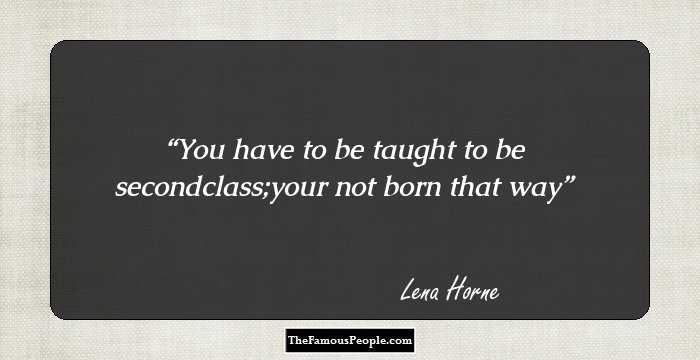 2. America Salutes Richard Rodgers: The Sound of His Music (1976)

See the events in life of Lena Horne in Chronological Order