Kris Kristofferson is an American actor and singer-songwriter. He gave up a promising career in the military as he wanted to be a songwriter. He is best known for penning classics, such as ‘Sunday Mornin' Comin' Down,’ ‘Once More with Feeling,’ ‘For the Good Times,’ ‘Help Me Make It Through the Night,’ and ‘Me and Bobby McGee.’ He recorded his debut album ‘Kristofferson,’ but it flopped. His second album ‘The Silver Tongued Devil and I’ fared very well. The song ‘Why Me’ from his fourth album ‘Jesus Was a Capricorn’ was an incredible hit. He began to focus on acting, debuting in ‘The Last Movie’ and then starring in the cult movie ‘Cisco Pike.’ His most successful films are ‘Pat Garrett and Billy the Kid,’ ‘Alice Doesn't Live Here Anymore,’ ‘Vigilante Force,’ ‘Convoy,’ the ‘Blade’ series, and ‘Dolphin Tale.’ Though critics were not too happy with ‘A Star is Born,’ the musical film earned him a ‘Golden Globe.’ The soundtrack for the movie, which he performed along with Barbara Streisand, sold 15 million copies. He went on to record many more albums with his then wife Rita Coolidge, and collaborated successfully with country singer Willie Nelson. American People
Singers
Musicians
Lyricists & Songwriters
American Men
Childhood & Early Life
Kristoffer Kristofferson was born on June 22, 1936, in Brownsville, Texas, USA, to Lars Henry Kristofferson and Mary Ann. His father was an Air Force Major General who retired from the military and joined the Saudi Arabian company ‘Aramco.’
He spent most of his early childhood in Brownsville, Texas. He graduated from ‘San Mateo High School,’ California in 1954. He joined ‘Pomona College,’ Claremont, where he won a short story contest conducted by ‘Atlantic Monthly’ magazine.
A brilliant sportsman and scholar, he completed B.A in Literature. Having received ‘Rhodes Scholarship’ he joined Oxford University’s ‘Merton College’ and obtained a B. Phil in English literature in 1960. 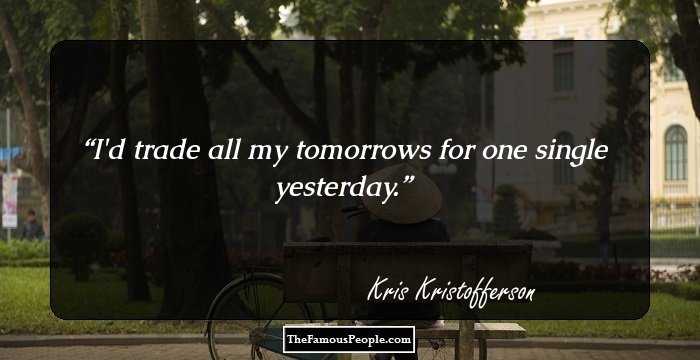 Continue Reading Below
Career
Kristofferson joined the army and was posted in West Germany during the early-1960s. In 1965, assigned to West Point military academy as an English instructor, he decided to resign from the Army to take up songwriting seriously.
He moved to Nashville where he struggled to make ends meet. He succeeded as a songwriter with ‘Viet Nam Blues’ for singer Dave Dudley. The song made the ‘Top 20’ in 1966.
In the 1970s, Ray Stevens (‘Sunday Mornin' Comin' Down’), Jerry Lee Lewis (‘Once More with Feeling’), Ray Price (‘For the Good Times’), and Sammi Smith (‘Help Me Make It Through the Night’) recorded his songs.
Though his debut album ‘Kristofferson’ had flopped, his second album ‘The Silver Tongued Devil and I,’ which released in 1971, did extremely well on the Country and Pop charts, and gave him recognition as a singer.
In 1971, he made his acting debut in Dennis Hopper’s ‘The Last Movie.’ He then landed a starring role in Bill Norton’s movie ‘Cisco Pike.’ He played a failed musician-turned-drug peddler in the film.
On the heels of his third album ‘Border Lord,’ ‘Jesus Was a Capricorn,’ his fourth album, was released. Its chartbusting single ‘Why Me’ ensured the success of the album.
He starred with James Coburn and Bob Dylan in the 1973 Sam Peckinpah film ‘Pat Garrett and Billy the Kid.’ His role ‘Billy the Kid’ brought him ‘BAFTA’ nomination for ‘Most Promising Newcomer.’
Along with his then-wife Rita Coolidge, he released a successful duet album titled ‘Full Moon.’ However, the duo’s two other albums, ‘Spooky Lady's Sideshow’ and ‘Breakaway’ which released the following year, disappointed.
In Martin Scorsese’s 1974 comedy film ‘Alice Doesn't Live Here Anymore,’ he starred opposite ‘Academy’ award-winning actress Ellen Burstyn. The film was critically appreciated and won many ‘Oscars’ and ‘BAFTAs.’
Continue Reading Below
‘Vigilante Force’ (1976) saw him play ‘Aaron Arnold,’ a Vietnam War veteran, who undertakes the task of protecting a town from a gang of raucous oil-field workers.
In 1978, he once again starred in a Peckinpah film titled ‘Convoy.’ The film was a grand success and made $45 million at the box office. He participated in the ‘Havana Jam’ the following year.
Along with Dolly Parton, Willie Nelson, and Brenda Lee, he released the double album ‘The Winning Hand’ in 1982. The album peaked at No. 4 on ‘U.S. Billboard Top Country Album.’
In 1985, he joined Willie Nelson, Waylon Jennings, and Johnny Cash to form the super group ‘The Highwaymen.’ Their albums ‘Highwayman’ and ‘Highwayman 2’ were smash hits.
He co-starred with Wesley Snipes in the 1998 Vampire-action film ‘Blade.’ He went on to reprise his role as Blade’s mentor ‘Abraham Whistler’ in the film’s sequels, ‘Blade II’ and ‘Blade: Trinity.’
Between 2001 and 2008, he acted in films like ‘Planet of the Apes,’ ‘Dreamer: Inspired by a True Story,’ and ‘The Wendell Baker Story.’ He also released his music album ‘This Old Road.’
In 2009, he released the album ‘Closer to the Bone.’ It housed the song ‘Good Morning John’ which was about Johnny Cash. The single ‘Sister Sinead’ was a tribute to Sinéad O'Connor.
He starred in the film ‘Dolphin Tale,’ a true story of a dolphin. He also starred in the film’s sequel ‘Dolphin Tale 2’ in 2014.
In May 2010, he released the demos which he had recorded between 1968 and 1972 while working as a janitor. ‘Please Don't Tell Me How the Story Ends: The Publishing Demos’ was the first release of the demos. This was followed by his next album ‘Feeling Mortal’ which released three years later.
Continue Reading Below
He received a ‘Grammy Award’ nomination for ‘Best American Album’ for his 2015 album ‘The Cedar Creek Sessions.’
He had a recurring role in the TV series ‘Texas Rising’ in 2015. From 2016 to 2018, he was seen in movies like ‘Lawless Range,’ ‘Hickok,’ ‘The Star,’ and ‘Blaze.’ 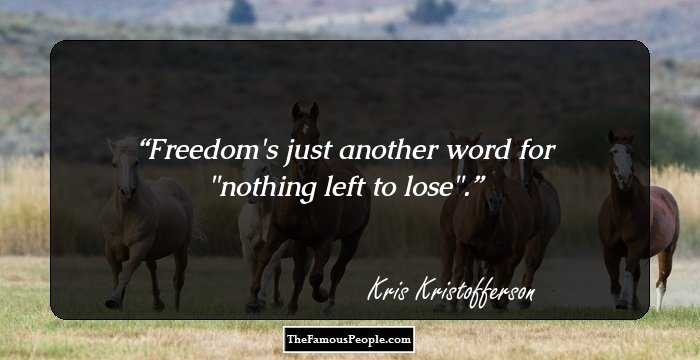 Major Works
‘Sunday Mornin' Comin' Down,’ penned by Kris Kristofferson for Ray Stevens, became a hit. But Johnny Cash’s version of the song in 1970 topped the ‘U.S. Billboard Hot Country Singles’ and won many awards.
‘Me and Bobby McGee,’ co-written by Kris for Roger Miller and Johnny Cash, was a hit. But Janis Joplin's version of the song is pegged at No. 148 on ‘Rolling Stone’ magazine’s list of ‘500 Greatest Songs.’
He portrayed a superstar in the 1976 musical film ‘A Star Is Born.’ The soundtrack for the film, performed with co-star Barbra Streisand, was certified 4xplatinum. It also topped the ‘Billboard 200’ chart for six weeks.
Awards
In 1977, Kristofferson won a ‘Golden Globe Award’ under the ‘Best Motion Picture Actor - Musical/Comedy’ category for his role as a musician in the film ‘A Star Is Born.’
He has been inducted into ‘The Songwriters Hall of Fame,’ ‘Nashville Songwriters Hall of Fame,’ and ‘Country Music Hall of Fame.’ He has also been awarded CMT’s ‘Johnny Cash Visionary Award.’ 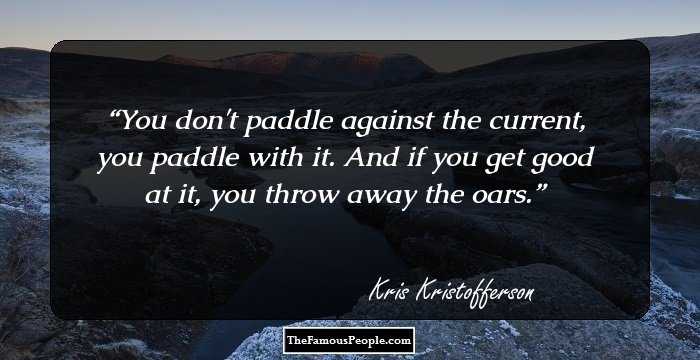 Quotes: You
Personal Life & Legacy
Kristofferson has fathered eight children from three marriages. His first two wives, Frances Beer and singer Rita Coolidge, were his childhood sweethearts. He is currently married to Lisa Meyers.
Trivia
This singer-songwriter-actor auditioned for the role of ‘Superman’ in the eponymous film. He was considered for playing ‘Rambo’ in the film ‘First Blood.’
This songwriter is said to have landed a helicopter in Johnny Cash’s backyard to give him a song that he had penned, and Cash did record the song.

Quotes By Kris Kristofferson | Quote Of The Day | Top 100 Quotes

See the events in life of Kris Kristofferson in Chronological Order