Jerry Garcia was an American musician and guitarist, best known as one of the co-founders of the rock band, The Grateful Dead. The rock band, formed in the mid-1960s was known for its unique and eclectic style which combined elements of rock, folk, bluegrass, blues, reggae, country, and psychedelia. He rose to prominence as the group’s lead guitarist and vocalist during the counterculture era and was also considered by some to be the spokesman of the extremely popular band. For around three decades The Grateful Dead ruled over the hearts of music lovers not just in America, but all over the world. Having gained a reputation for himself as the co-founder of the extremely famous musical group, Jerry Garcia also became involved in other projects alongside, the most notable being the Jerry Garcia Band. He had a very close friendship with the bluegrass mandolinist David Grisman and often collaborated to play with him. For all his creativity and talent, Garcia had a dark side—he was a heavy smoker and addicted to drugs. A diabetic, his health suffered greatly because of his addictions and deteriorated in the 1990s. He died of a heart attack in 1995, at the age of just 53. American Celebrities
Rock Singers
Lyricists & Songwriters
American Men
California Musicians
Childhood & Early Life
He was born as Jerome John Garcia on August 1, 1942, to Jose Ramon "Joe" Garcia and Ruth Marie "Bobbie" in San Francisco, California. His parents were big fans of music and they named him after the composer Jerome Kern. He had one elder brother.
He loved music from a young age and was encouraged by his music-loving parents to pursue his passion.
Tragedy struck the Garcia household in 1947 when his father drowned while on a fishing trip. His mother started working to support the family and Jerry and his brother were sent to live with their grandparents. His mother eventually remarried.
He attended the Monroe Elementary School where his artistic abilities became apparent. As he grew up, he became interested in rock and roll and rhythm and blues and was inspired by the likes of Ray Charles, John Lee Hooker, B. B. King, Hank Ballard, and Chuck Berry.
As a student, he attended several schools including Menlo Oaks School, Balboa High School, and the Analy High School. He was a trouble-maker as a teenager and was notorious for skipping classes and fighting with fellow students.
In 1961, he was involved in a serious car accident in which one of his friends died. This was a wakeup call for young Jerry and he vowed to rebuild his life. 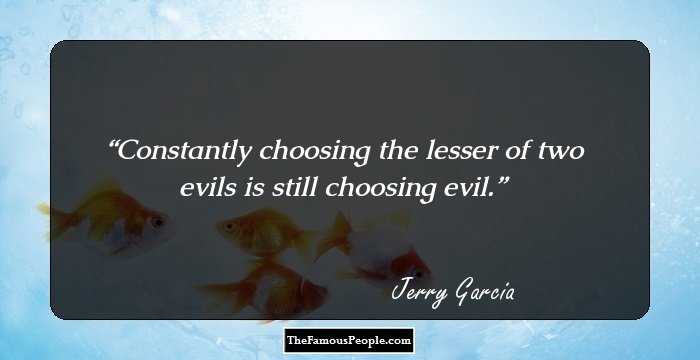 The Best Black Actresses Of All Time
Career
Jerry Garcia decided to take his life seriously and started playing the guitar in earnest. He played with several bands over the next couple of years and also started teaching acoustic guitar and banjo. During this time he became acquainted with some other aspiring musicians and decided to form his own band.
Along with Bob Weir, Ron "Pigpen" McKernan, Phil Lesh, and Bill Kreutzmann, he founded the rock band, The Grateful Dead, in 1965 in Palo Alto, California. The band had many musical influences and made extensive use of improvisation, and is considered one of the originators of jam band music.
The band’s first two albums ‘The Grateful Dead’ (1967) and ‘Anthem of the Sun’ (1968) were moderate successes though it was their third album, ‘Aoxomoxoa’ (1969) that established them as a popular rock group. The band also used to tour a lot and play live concerts.
Over the 1970s the band became increasingly popular due to its eclectic and unique music. In addition to his career with The Grateful Dead Jerry Garcia also started taking up side projects and released his solo albums ‘Garcia’ (1972), ‘Compliments’ (1974), and ‘Reflections’ (1976).
He founded another band, The Jerry Garcia Band, in the mid-1970s. It was one of his most important side-projects and had the bassist John Kahn and keyboardist Melvin Seals. This band too played rock music infused with elements of blues, folk, country, and jazz.
The 1980s was a very difficult period for Garcia. He had become addicted to drugs because of which his health declined considerably. This also impacted his musical career negatively and thus he was not much productive during this decade.
He returned to his past glory in the 1990s when he teamed up with the bluegrass/newgrass mandolinist and composer David Grisman to release the albums ‘Garcia/Grisman’ (1991) and ‘Not for Kids Only’ (1993). 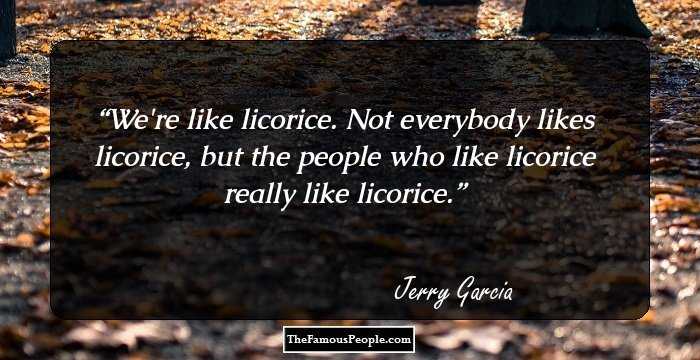 Quotes: Like
Major Work
Jerry Garcia is best remembered as one of the co-founders of the rock band, The Grateful Dead. The band was very popular for their live performances and improvisational style, and were ranked 57th in the issue The Greatest Artists of all Time by ‘Rolling Stone’ magazine. The Grateful Dead have sold more than 35 million albums worldwide.
Awards & Achievements
Jerry Garcia was inducted into the Rock and Roll Hall of Fame as a member of the Grateful Dead in 1994.
He was ranked 13th in Rolling Stone's "100 Greatest Guitarists of All Time" cover story 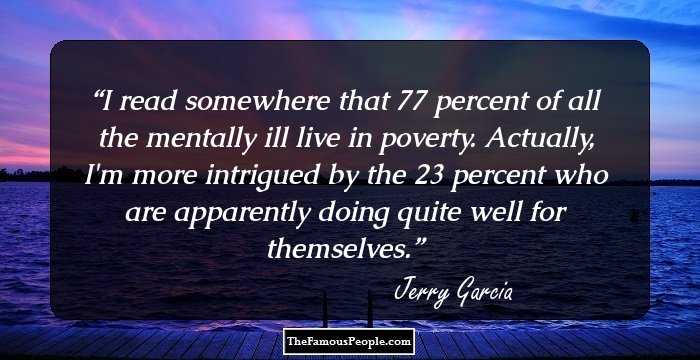 Quotes: I
Personal Life & Legacy
Jerry Garcia married Sara Ruppenthal Garcia in 1963 and had one daughter. He became involved with another woman, Carolyn Adams, while still married to Sara leading to their divorce in 1967.
Carolyn gave birth to two daughters in the 1970s. Garcia married Carolyn in 1981. He started a relationship with Deborah Koons while he was still involved with Carolyn.
Garcia and Carolyn Adams officially divorced in 1994 and he married Deborah Koons.
Jerry Garcia struggled with drug addiction and heavy smoking. He was also a diabetic, and his addictions aggravated his health problems. He died of a heart attack on August 9, 1995, at the age of just 53.
Recommended Lists:
Musicians #142
Singers #595
You May Like

Quotes By Jerry Garcia | Quote Of The Day | Top 100 Quotes

See the events in life of Jerry Garcia in Chronological Order