Kofi Atta Annan, a diplomat from the West African country of Ghana, was the first to emerge from the ranks of United Nations (UN) staff to serve as the Secretary-General of the UN. He served as the seventh UN Secretary-General from 1997 to 2006. The UN and Annan were jointly awarded the The Nobel Peace Prize 2001 "for their work for a better organized and more peaceful world". While he was the Secretary-General, he prioritized the establishment of a comprehensive reforms programme aimed at revitalizing the UN. UN had traditionally been working in the areas of development and he worked for further strengthening this work. A passionate advocate of human rights, and a strong believer in the universal values of equality, tolerance and human dignity, Annan wanted to bring the UN closer to the people by reaching out to new partners, and thereby restore public confidence in the organization. He had a major part to play in the establishment of two new intergovernmental bodies: the Peacebuilding Commission and the Human Rights Council in 2005. He also played a pivotal role in the creation of the Global Funds to fight AIDS, Tuberculosis and Malaria. He strongly opposed the 2003 invasion of Iraq and Iran's nuclear programme. After his retirement from the UN in 2006, he returned to Ghana where he was involved with a number of African as well as global organizations. Stephen Lewis
8th April In History
DID WE MISS SOMEONE?
CLICK HERE AND TELL US
WE'LL MAKE SURE
THEY'RE HERE A.S.A.P
Quick Facts

Notable Alumni: School Of Management, University Of Science And Technology

Ghanaian Celebrities
Diplomats
Black Leaders
Black Diplomats
Black Miscellaneous
Childhood & Early Life
Kofi Atta Annan and his twin sister, Efua Atta, were born to Victoria and Henry Reginald Annan in Kumasi, Ghana. Henry Reginald used to work as an export manager for the Lever Brothers cocoa company.
Both of his grandfathers and his uncle were tribal chiefs and he was raised in one of Ghana's aristocratic families.
He attended the elite Mfantsipim School, a Methodist boarding school from 1954 to 1957. It was here that he learnt "that suffering anywhere concerns people everywhere."
Ghana became the first British African colony to gain independence in 1957, the same year when Annan graduated from the Mfantsipim School. As a member of the generation that witnessed their country’s independence struggle and subsequent victory, he grew up thinking that everything was possible.
He joined the Kumasi College of Science and Technology in 1958 for a degree in economics. Receiving a Ford foundation grant enabled him to complete his undergraduate studies in economics at Macalester College in St. Paul, Minnesota in 1961.

He then undertook graduate studies in economics at the Institut des hautes études internationales in Geneva, Switzerland from 1961 to 1962. 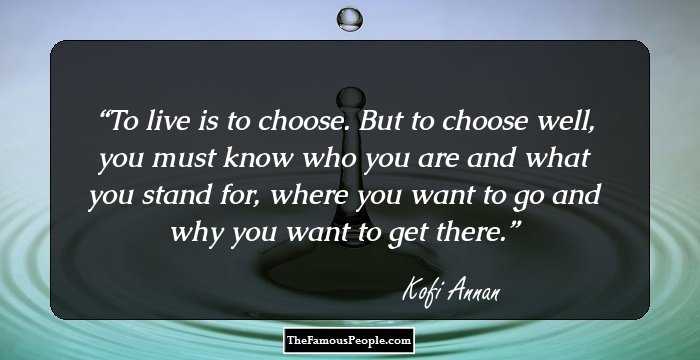 Quotes: You
Continue Reading Below
Career
Kofi Annan’s career with the UN began in 1962 when he joined as an administrative and budget officer with the World Health Organization in Geneva.
He took a short break from being an international civil servant when he worked as the director of tourism in Ghana from 1974 to 1976.
In the 1980s, Annan returned to work for the UN as an Assistant Secretary-General in three consecutive positions: Human resources management and security coordinator (1987-1990); programme planning, budget and finance, and controller (1990-1992); and peacekeeping operations (1993-1996).
Before becoming the Secretary-General, he also served as Under-Secretary-General.
His first five-year term as the UN Secretary-General began on 1 January 1997 when he replaced outgoing secretary-general Boutros Boutros-Ghali of Egypt.
In 1998, he appointed a lady, Louise Frechette of Canada, as the first deputy secretary-general in an attempt to bring about more gender equality within the UN system.
His second term as Secretary-General began on 1 January 2002 when his tenure was renewed. His reappointment to the post was an indication of his immense popularity.
After leaving the UN, he returned to Ghana where he became actively involved with a number of organizations like the Global Humanitarian Forum, The Elders, United Nations Foundation, One Young World, etc.
In February 2012, Annan was appointed as the joint U.N.-Arab League special envoy to Syria in an attempt to deal with the ongoing conflicts there. He resigned in August 2012 owing to lack of any progress due to intransigence on the part of all the concerned parties.
Continue Reading Below 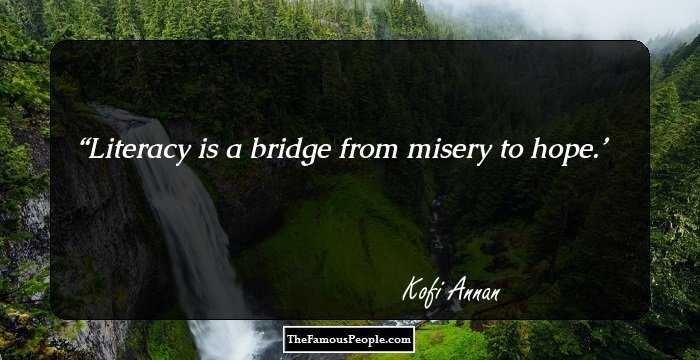 Quotes: Hope
Major works
As the Secretary-General of the UN, he launched the “Global Compact” campaign in 1999, which is the world’s biggest initiative for promoting corporate social responsibility.
Annan viewed the HIV/AIDS pandemic as his “personal priority”, and in April 2001, issued a “Call to Action”, proposing the establishment of a Global AIDS and Health Fund to help developing countries deal with the crisis.
After the September 2001 terrorist attacks on the US, he played a crucial role in stimulating the General Assembly and the Security Council to take actions for combating terrorism.
In 2005, he presented a progress report, ‘In Larger Freedom’, to the UN General Assembly in which he recommended a host of reforms to renew and strengthen the UN organization.
Awards & Achievements
Annan and the UN were jointly awarded The Nobel Peace Prize in 2001 for “their work for a better organized and more peaceful world." 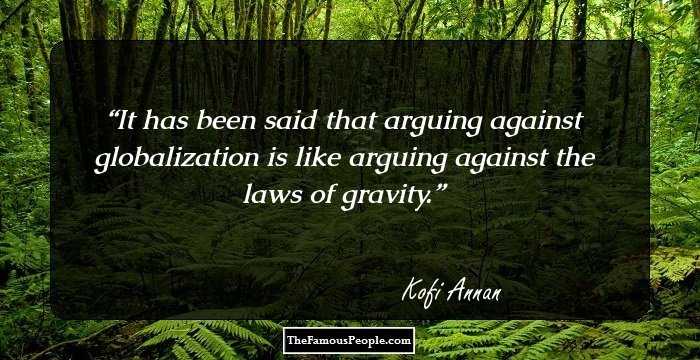 Quotes: Like
Personal Life & Legacy
Annan married a Nigerian woman Titi Alakija in 1965, but they later separated in the 1970s, and divorced in 1983. They have two children, Ama and Kojo, together. He later got married to Nane Lagergren, a Swedish lawyer. She has a daughter from a previous marriage.
Kofi Annan died on August 18, 2018, in Bern, Switzerland. He was 80.
Trivia
The name ‘Kofi’ literally means “a boy born on a Friday.”
He was fluent in many languages including English, French, Akan and other African languages.
His memoir “Interventions: A Life in War and Peace”, written with Nader Mousavizadeh was published in 2012.

See the events in life of Kofi Annan in Chronological Order 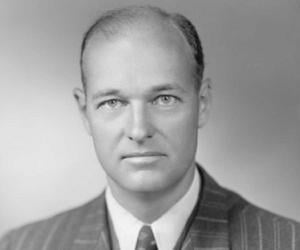