Kim Tae-yeon is one the most popular South Korean singers. Popularly known as Taeyeon, most of her tracks are chartbusters. She is the lead vocalist of the SM Entertainment’s all girl group, ‘Girls’ Generation’. Apart from singles, Taeyeon has lent her voice to many tracks for television dramas and movies. From 2015 to 2017, every track featuring Taeyeon was in the top three of the music charts. Needless to mention, this oldest ‘GG’ member has the highest number of fans. From rock to jazz, Taeyeon displays a varied range of music styles, making her the perfect voice for the OSTs. Her collaborated works with other artists have also been received well by the music lovers. No wonder, Taeyeon is the “Queen of the Original Soundtracks” in the industry. South Korean People
Rhythm & Blues Singers
South Korean Women
Pisces Singers
Women Singers
Childhood & Early Life
Born on March 9, 1989, in Jeonju, South Korea, Taeyeon is a natural singer. She grew up with her elder brother and younger sister. In her early childhood she realized that the only thing she can excel in is singing. However, her father was a little apprehensive about her career choice initially, but Taeyeon’s dedication and melodious voice convinced him.
Taeyeon soon started her training and enrolled herself in the premier institution, SM Academy. She was under the tutelage of popular Korean singer, Jeong Soon-won (The One), for three years.
During the training period, Taeyeon impressed her instructor with her amazing grasping power. So much so, that even before she finished her training, she had signed her first ever contract with SM Entertainment.
She joined the SM Entertainment’s in-house girl’s group “Girls’ Generation” in August 2007. Thereon, she started learning the pre-requisites to debut with a musical band. She found the process very grueling and at one point the thought of even quitting hit her mind. But she persisted and finished the training to make her debut.
Continue Reading Below
You May Like

Famous Beautiful Women With Green Eyes
Career
Taeyeon’s career in singing started right after a year of her graduation from Jeonju Art High School in 2008. She recorded her first single “Gee” with “Girls’ Generation” and it was released in 2009.
Apart from group performances, Taeyeon featured in many solo and duet tracks. Most of her earlier duets are with the South Korean singer, “Kangta”.
By now, Taeyeon had cemented her place in the industry. She took a step ahead, and started recording soundtracks for many television dramas like “Hong Gil Dong”, “Beethoven Virus”, and “Can You Hear Me", to name some. All the tracks became very popular, more than the dramas.
Taeyeon also tried her luck in hosting and acting and left an impact in these fields too. Many critics found her better than her contemporaries who are actors-turned-singers.
Unaffected by the critical acclamations, Taeyeon decided to quit acting and focus only on singing. Along with her group members, Tiffany and Seohyun, she created a subgroup in April 2012, and named it “TTS”. The gang became super popular right from their debut track, “Twinkle”. The subgroup’s success spree continued for the next 3years.
Taeyeon has an image of fashionista due to her trendy dressing styles that youth loves to follow. One of the opulent lifestyle magazines, VOGUE, even labeled her with the title, "Beyoncé of Girls' Generation". She also secured a place on the Forbes list of "Top 40 Power Celebrities".
In 2015, Taeyeon released her solo album titled ‘I’ after a year-long pre-recording work. The album became an instant and sold over 119,576 copies. Till date, Taeyeon has released numerous singles and duets and most of them have topped the music charts.
As Singer
You Bring Me Joy: Highly impressed by Taeyeon’s singing, ‘The One’ offered her to feature with him on this track from his title album. The track released in 2004, much before she graduated from the art school.
Can You Hear Me: Taeyeon featured in this track from the album of the Korean drama, ‘Beethoven Virus’. The drama aired in 2008.
Continue Reading Below
I Love You: This is the track from the album ‘Athena-Goddess of War’. Released in 2010, the track placed at number two in the KOR Gaon music charts.
Breath: This is the second volume of the album ‘SM Ballad’, released on February 13, 2014. Taeyeon collaborated with singer, Jonghyun, for the track with the same name.
Shake That Brass: Taeyeon collaborated with rapper and singer, Amber, for the song. The track is from the extended play, "Beautiful", released on February 13, 2015.
I: This is Taeyeon's first extended play which released on October 7, 2015. She has collaborated with the rapper "Verbal Jint" for many of the tracks. With over 119,576 copies sold, the album became the 14th best-selling album of the year. The album alone majorly contributed to the gross profit of the Korean music industry.
Rain: This is Taeyeon's solo song and it released on February 3, 2016. The track was released on the digital platform of SM Entertainment's in-house radio station, SM Station.
Why: On June 28, 2016, Taeyeon released this extended play. The album catered to huge section of music lovers since it included a wide variety of music. Taeyeon collaborated with herfellow “Girls' Generation” member, “Hyoyeon”, and “R&B” fame, “Dean”, in the album.
My Voice: Released on February 28, 2017, this is Taeyeon's first single studio album. The album was a tremendous success with 109,275 copies sold and topped Gaon Music Album Chart. In the same year, Taeyeon performed all the tracks of the album during her concert tour, “Persona”.
As An Actress
I Am-SM Town Live World Tour: This is a documentary film on the life of artists from “SM Town”. Taeyeon played herself in this film which beautifully captured the inspiring journey of the artists towards their most prestigious concert, the SM Town Live '10 World Tour concert, held at ‘Madison Square Garden”, New York. The film released on June 21, 2012. In 2015, the second part released by the name “SM Town- The Stage” which again featured Taeyeon as herself.
Despicable Me 1 & 2: Taeyeon dubbed the voice for the character "Margo" for both the parts of the Korean version. The first part released on July 9, 2010, while the second part came in 2013.
Continue Reading Below
The Midnight Sun: Taeyeon made her debut as a lead actor with this Korean version of the Japanese film, "Song to the Sun". She played a xeroderma pigmentosum patient named Kaoru. The film released in 2010.
Awards & Achievements
Cyworld Digital Music Awards (2008): Taeyeon's song ‘If’ won the song of the year award.
Golden Disc Awards (2008): The song ‘Can You Hear Me’ won the ‘Yepp Popularity Award’.
Gaon Charts Music Awards (2015): Taeyeon's song ‘I’ won the ‘Song of the Year’ award.
KK Box Music Awards (2016): Taeyeon received the award for the "Korean Artist of the Year".
Personal Life
Taeyeon's love for singing comes from her parents as they both are vocalists.
Taeyeon dated Korean singer, Byun BaekHyun, for quite some time. She never opened about her relationship, but in September 2010, she officially announced her break up with the singer. The couple parted ways due to the lack of time for each other.
Taeyeon once again came into the news because of the rumor of dating rapper G-Dragon. However, neither of them ever confirmed the news to media.
Taeyeon's ideal type of man is someone who is young both at heart and in appearance. She would like to date someone who is great in making conversations and pamper her with surprises.
Trivia
Taeyeon has a peculiar nickname, "Pervert Byutaeng".
In her earlier days, Taeyeon suffered from insomnia, but she later turned into a sleepwalker.
She can mimic Sharapova's tennis playing sound effects with her mouth. 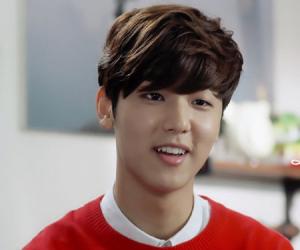