Kayte Walsh is an English air hostess turned actress who is better known as the fourth wife of American actor Kelsey Grammer. She worked as a flight attendant for the Virgin Atlantic Airways at the time she began dating Grammer. Thanks to her work in Upper Class for Virgin Atlantic on flights to and from America, she was used to meeting celebrities, which is how she met her future husband. Walsh, who was vilified for ruining Grammer’s 13-year-old marriage to his third wife Camille Donatacci, appeared alongside Grammer on an episode of the OWN show Oprah's Next Chapter in August 2012 to discuss with Oprah Winfrey her role in the split. She mentioned on television that she was not proud of the way their relationship began as Grammer was already married at the time. Kayte has appeared as herself on other TV shows as well, including The Tonight Show Starring Jimmy Fallon and Entertainment Tonight. She made her acting debut on the Starz drama series Boss, in which her husband played the lead role of Mayor Tom Kane, a fictional mayor of Chicago. 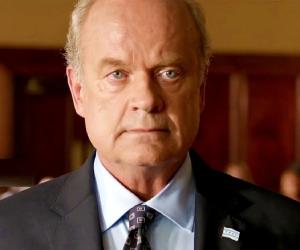 Romeo Beckham
DID WE MISS SOMEONE?
CLICK HERE AND TELL US
WE'LL MAKE SURE
THEY'RE HERE A.S.A.P
Quick Facts
Family:

Kayte Walsh made news headlines on 12 August 2010 when the then 29-year-old air hostess was snapped happily strolling together with the 55-year-old former Frasier star Kelsey Grammer, who had just filed for divorce from his third wife, former Playboy model Camille Donatacci, six weeks ago. While Kayte’s identity was not immediately known, the following day Daily Mail reported that she is the daughter of former British footballer, Alan Walsh, and is 25 years younger than her beau.

Kayte Walsh was also the one to confirm that she was carrying the child of Kelsey Grammer at the time. Due to the fact that Grammer's then wife, Camille Donatacci, was a main cast on the reality TV series, The Real Housewives of Beverly Hills, the scandal involving the affair became a staple on the show with Donatacci regularly whining about how her "whole life was falling apart" or how small their old NY apartment was compared to the $6.5 million four-room NYC apartment Kelsey Grammer bought for Kayte Walsh. Kate and Kelsey’s marriage—two weeks after Grammer's divorce was finalized—again provided gossip materials for tabloids, but since then Kayte has led a comparatively quite life with occasional public appearances with her husband and children.

Kayte Walsh was born in Bristol, England to former footballer Alan Walsh and his wife Susan. Her father played as a striker for Bristol City and Darlington much of his career, and later became a coach at Bristol City. She is the eldest daughter of her parents and has a younger sister named Sophie, as well as a brother named Phil, who also became a footballer and played in the Football League for Dagenham & Redbridge and Barnet.

According to her father, Kayte Walsh and Kelsey Grammer possibly met in New York as she had frequent stops there during her fights to America. The facts that they were dating and that she was pregnant with his fifth child became public in early June 2010. In October that year, Kelsey Grammer reported that Kayte had a miscarriage six weeks earlier. Amidst numerous reports on their relationship and his push for a quick divorce from his third wife Camille Donatacci, Kelsey confirmed in December 2010 that he was in love with Kayte Walsh and that they were already engaged. While he did not mention when they were planning to get married, he informed that they were planning for a private marriage ceremony.

Kelsey Grammer and Kayte Walsh finally got married at The Plaza Hotel in New York City on February 25, 2011, just two weeks after his third divorce was finalized. In January 2012, they announced that she was pregnant with twins, however, they lost the boy shortly after, and she welcomed her first child, a daughter named Faith Evangeline Elisa Grammer on July 13, 2012 in Los Angeles. This was the fifth child for Grammer, who was previously married three times. Grammer and Walsh later welcomed two boys named Kelsey Gabriel Elias Grammer and Auden James Ellis Grammer in 2014 and 2016, respectively.