Justin Pierre James Trudeau, the leader of the ‘Liberal Party,’ is the 23rd prime minister of Canada. His father Pierre Trudeau was the former prime minister of Canada. At 43, Justin became the second-youngest prime minister of Canada. Before becoming an active politician, he was a teacher and chaired the board of ‘Katimavik,’ a project taken up by a family friend. He first gained public exposure at his father’s state funeral, where he delivered a moving eulogy. He was first elected in the 2008 federal election to represent Montreal’s Papineau in the ‘House of Commons.’ In the following years, he became Liberal Party’s critic for a number of departments like ‘Youth and Multiculturalism,’ ‘Citizenship and Immigration,’ ‘Secondary Education,’ and ‘Youth and Amateur Sport.’ While seeking the position of the prime minister in 2015, Justin Trudeau promised a lot of unconventional changes in fields like abortion rights, marijuana legalization, and tax payment. His campaign was positive, thanks to Trudeau’s remarkable oratory skills. Liberal Party’s victory was unprecedented when it moved from 36 to 184 seats through Trudeau’s earnest efforts. Trudeau has also starred in a TV movie titled ‘The Great War.’ He is also famous for his boxing skills. Sophie Grégoire
DID WE MISS SOMEONE?
CLICK HERE AND TELL US
WE'LL MAKE SURE
THEY'RE HERE A.S.A.P
Quick Facts

Canadian People
Political Leaders
Canadian Men
McGill University
Tall Celebrities
Childhood & Early Life
Justin Trudeau was born on December 25, 1971, in Ottawa, Ontario, Canada, to Pierre Elliott Trudeau, the 15th prime minister of Canada, and Margaret Trudeau (née Sinclair).
He is the oldest of three sons born to his parents. His two younger brothers are Alexandre (Sacha) and Michel.
His fifth great-maternal grandmother was the daughter of a French father and Malaccan mother, which makes Trudeau the first Canadian prime minister to have confirmed non-European lineage.
Trudeau has a BA degree in literature from ‘McGill University,’ a B.Ed degree from the ‘University of British Columbia,’ and an engineering degree from ‘Université de Montréal.’
He taught French and Mathematics at the ‘West Point Grey Academy’ before joining politics. 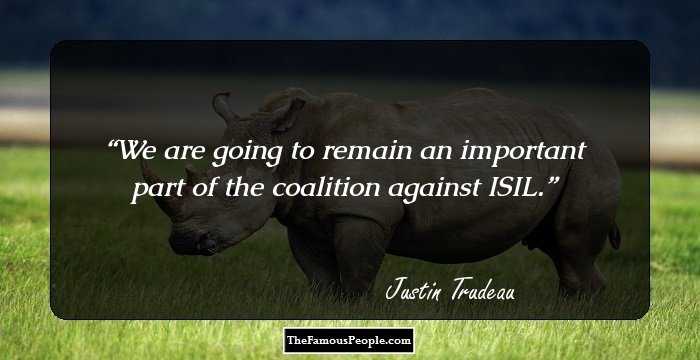 Continue Reading Below
Career
He started his political career by seeking the ‘Liberal Party’ nomination in the district of Papineau. On April 29, 2007, he picked up 690 votes and won the nomination, competing against Mary Deros and Basilio Giordano, who won 350 and 220 votes respectively.
He won the Papineau election on October 14, 2008, by defeating Vivian Barbot of ‘Bloc Québécois’ party.
In 2008, Trudeau entered the parliament as a member of the ‘Official Opposition.’
In 2009, he chaired the Liberal Party’s national convention in Vancouver.
On October 2009, he was appointed as the party’s critic for multiculturalism and youth.
September 2009 saw him take the post of the critic again for youth, citizenship and immigration.
Justin Trudeau won the Canadian federal election in Papineau on May 2, 2011.
On November 17, 2011, Trudeau stripped down to his undershirt at a charity event for the ‘Canadian Liver Foundation.’ During his campaign in 2013, this clip was shown by the opposing party in attack ads.
After the resignation of the ‘Liberal Party’ leader Michael Ignatieff, Trudeau launched his leadership bid for the ‘Liberal Party’ on October 2012.
Continue Reading Below
On April 14, 2013, Trudeau defeated both his fellow leadership candidates Marc Garneau and Joyce Murray to become the leader of the ‘Liberal Party.’ He had acquired 80.1% of 30,800 votes.
However, the same year, Trudeau chose to give up his seat in favor of Irwin Cotler as a mark of respect for his work in fighting Apartheid with Nelson Mandela.
On October 19, 2015, Trudeau led the ‘Liberal Party’ to victory in the federal election. This was one of the longest official campaigns in 100 years in which the Liberals won 39.5% of the popular vote (184 of the 338 seats in the House of Commons) and the highest 150 seat gain for a single party since Confederacy.
On November 4, 2015, Justin Trudeau was sworn in by Governor General David Johnston as Canada’s 23rd prime minister.
Trudeau declared that his administration will lower taxes for the middle class. He also put forth a statement, saying that the government will be an open and ethical one.
On December 7, 2015, he announced his responsibilities towards the indigenous community of Canada, and assured them just rights at the ‘Assembly of First Nations.’
Trudeau was the first member of the 40th Parliament of Canada to bring in a private member's motion. He called for a "national voluntary service policy for young people." 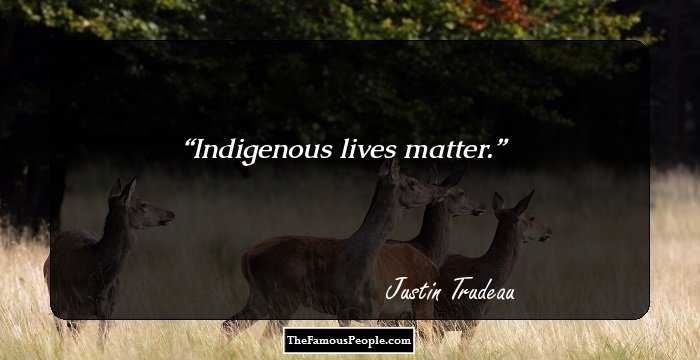 Personal life & Legacy
Justin Trudeau married Sophie Grégoire, a Canadian TV and radio host, on May 28, 2005, in a Roman Catholic ceremony at Montreal's ‘Sainte-Madeleine d'Outremont Church.’
Continue Reading Below
The couple has three children; Xavier James (born October 18, 2007), Ella-Grace Margaret (born February 5, 2009), and Hadrian Grégoire (born February 28, 2014).
In 2014, Trudeau published his journal ‘Common Ground’ where he narrates his journey as the son of a prime minister.
Trivia
During a state visit to Canada in 1972, Richard Nixon, the then American president, raised a toast to the four-month old Justin and called him the future Canadian prime minister.
Trudeau has shown interest in adventure sports like white water rafting, bungee jumping, and snowboarding.
After the unfortunate death of his brother in an avalanche, Trudeau and his family started the ‘Kokanee Glacier Alpine Campaign’ in 2000.
In 2005, he stood against the proposition of establishing a zinc mine which would pollute the Nahanni River.
He took part in resolving the ‘Darfur crisis,’ a military conflict in Sudan.
On March 31, 2012, he participated in a charity boxing match as part of the cancer research fundraising event ‘Fight for the Cure,’ and defeated the Conservative Senator Patrick Brazeau. 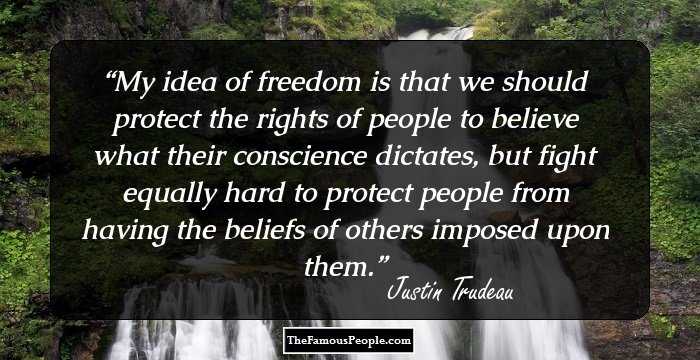 Quotes By Justin Trudeau | Quote Of The Day | Top 100 Quotes

See the events in life of Justin Trudeau in Chronological Order