(Comedian, Actor and Filmmaker Known for His Deadpan Expressions, Which Earned Him the Nickname ‘The Great Stone Face’)

Joseph Frank Keaton, better known as Buster Keaton, was a comedian and actor who rose to prominence with his silent films in which he often played the character of a poker faced man with a deadpan expression. So famous was his expressionless, stoic face that he earned the nickname of “The Great Stone Face”. Born into a vaudeville family, Keaton was destined for the show business. He began performing with his parents in ‘The Three Keatons’ when he was just three years old. His family performed a comedy sketch in which the young boy would be constantly tossed and thrown around the stage, often inviting the wrath of authorities who accused his parents of child abuse. It was during this time that he realized that he could elicit more laughter from the audience by making a poker face rather than by laughing himself during the comedy act. He made his transition from vaudeville to films when he was 21 years old. Initially apprehensive about the medium of film, his reservations went away after the success of ‘The Saphead’ in which he played a lead role for the first time. More roles followed and he was soon a major comedian in Hollywood; he was ranked as the 21st greatest male star by the American Film Institute.

American Celebrities
Comedians
American Men
Kansas Actors
Libra Actors
Childhood & Early Life
He was born into a vaudeville family; his father’s name was Joseph Keaton while his mother’s was Myra. His father owned a traveling show called the ‘Mohawk Indian Medicine Company’ along with Harry Houdini.
He began performing with his parents as a three year old in the act ‘The Three Keatons’, first appearing on stage in 1899. His parents performed a comedy sketch that involved the young Buster being tossed and thrown around a lot. In spite of this seemingly rough treatment, the boy was never injured.
While he was a little kid he would start laughing as his father threw him around but this did not get much laughter from the audiences. So, he developed a deadpan expression while performing which had the viewers doubled up in laughter.
His parents were often questioned by authorities and arrested for child abuse. His parents also had several brushes with the law when child performers were banned. He did not go to school; instead his mother taught him to read and write at home. 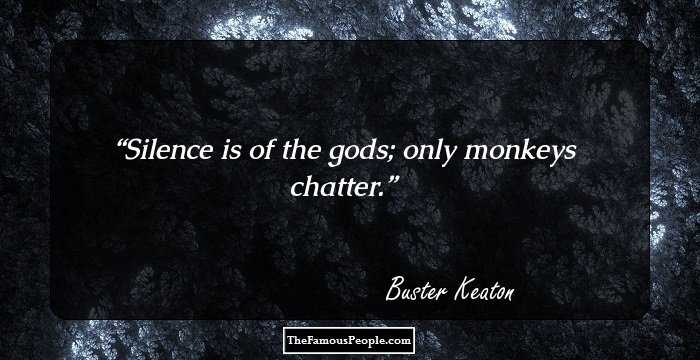 Continue Reading Below
Career
After a short stint with the 40th Infantry Division in France during the World War I, he began a career in the film industry. He was hired as a co-star and gag man by Fatty Arbuckle in 1917 and appeared in the short film ‘The Butcher Boy’.
He formed a deep professional relationship as well as a personal friendship with Arbuckle and appeared in a number of his short film productions including ‘His Wedding Night’ (1917), ‘The Bell Boy’ (1918), and ‘Backstage’ (1919).
Following his successful collaboration with Arbuckle, film executive Joseph M. Schenck gave Keaton his own production unit, Buster Keaton Comedies. He made a series of two-reel comedies which included ‘One Week’ (1920), ‘The Haunted house’ (1921), ‘The Paleface’ (1922), and ‘The Lovenest’ (1923).
He appeared in his first feature length film, ‘The Saphead’ in 1920. His performance in the film was highly appreciated and this film acted as the launch pad for his career.
In 1923, he wrote, produced and starred in ‘Our Hospitality’ which was a silent comedy that told the story of Willie McKay who gets caught in an infamous feud.
The 1925 comedy silent film, ‘Seven Chances’ which was directed by and starred Keaton was based on a play written by Roi Cooper Megrue. It was about the story of a man who would inherit a large fortune if and only if he is married by his 27th birthday.
One of his best known films, ‘The General’ came in 1926. The screenplay was adapted from the memoir ‘The Great Locomotive Chase’ by William Pittenger. The movie performed poorly at the box office at the time of its release but today it is considered one of the greatest movies.
In 1928, he signed with MGM—a decision which he would later come to regret. The contract severely limited his creative inputs, and the films he made with them lacked the typical “Buster” effect. After years of poor performances, he declared bankruptcy in 1934.
His career saw a revival during the 1940s and he got the opportunity to appear in both major and minor films, albeit in small or cameo roles. His played his last lead role in the film ‘Boom in the Moon’, which was released in 1946. After that he played cameos in films such as ‘In the Good Old Summertime’ (1949), ‘Sunset Boulevard’ (1950) and ‘Around the World in Eighty Days’ (1956).
Continue Reading Below 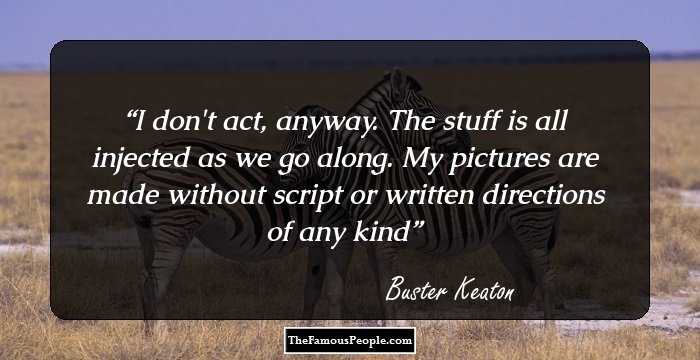 Quotes: I
Major Works
His movie, ‘The General’ was stated to be "the greatest comedy ever made, the greatest Civil War film ever made, and perhaps the greatest film ever made” by Orson Welles. The movie was neither a critical nor a commercial success at the time of its release, but now it is considered to be one of the best films of all time.
Awards & Achievements
He was presented with The Academy Honorary Award in 1958 "for his unique talents which brought immortal comedies to the screen.” 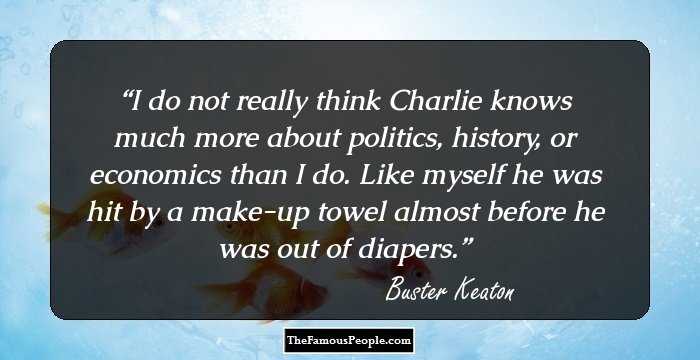 Quotes: Think, Like, History, I
Personal Life & Legacy
He married Natalie Talmadge in 1921. The couple had two sons. Their relationship began to suffer after the birth of their second son and the couple divorced in 1932.
His second marriage in 1933 was with his nurse Mae Scriven. His second wife learnt of his sexual relations with another woman and divorced him.
He married again in 1940. His third wife Eleanor Norris was 23 years his junior. She had a calming effect on him and helped him control his alcoholism. The couple remained married until his death.
He died of lung cancer in 1966.
Trivia
This famous comedian designed his own pork pie hats which were often destroyed during filming or snatched away by fans as souvenirs.

See the events in life of Buster Keaton in Chronological Order