John Phillip Stamos is an actor, comedian, producer, musician, and singer. He is a major television celebrity in the U.S. with shows like ‘Full House’ and ‘General Hospital’ under his belt. Initially in his career, he had the quintessential bad boy image, thanks to his boyish charm and sex appeal. However, he worked hard to shed off this image and took up more serious roles. As a teenager, he used to work in his parents’ fast food restaurant and played drums in his school’s marching band. He was just 15 when he told his parents his intention of pursuing a career in acting and music which they fully supported. John got his first break when he was cast as ‘Blackie’ in the soap opera ‘General Hospital.’ He was much loved in this role and this paved the way for more substantial television and movie roles. His portrayal of ‘Jesse Katsopolis’ in the ABC sitcom ‘Full House’ made him an overnight heartthrob and established him as a major television star. Along with acting, he branched out into musical theatre, making his Broadway debut as an emcee in 1995. He is also a skilled musician who can play several instruments like drums, guitar, keyboard, and bass.
Continue Reading Below American People
American Men
California Actors
Tall Celebrities
Tall Male Celebrities
Childhood & Early Life
John Stamos was born on August 19, 1963, in Cypress, California, USA, to Bill Stamos and Loretta. He is the eldest among three siblings. He has two sisters. His father was a restaurateur of Greek origin.
He attended ‘John F. Kennedy High School’ where he also played drums in the school’s marching band. As a teenager, he helped his family in running the restaurant business.
He saw his first ‘Beach Boys’ concert in 1976 and decided to pursue a career in music and acting. His parents supported his ambition and encouraged him to pursue an acting career. 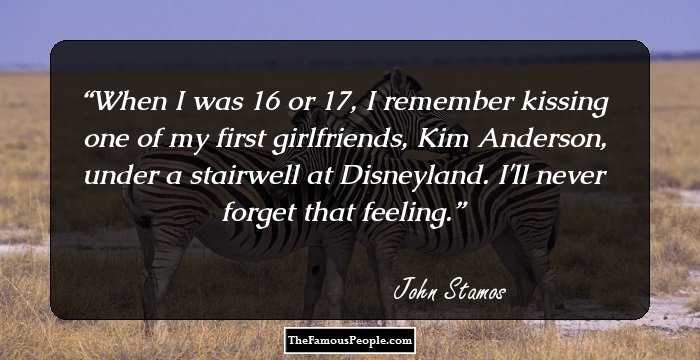 Who Is The Most Popular BTS Member?
Career
His first television role was as ‘Blackie Parrish’ in the medical drama series ‘General Hospital’ in 1982. Initially, the character was to appear in just five episodes, but the audience loved Stamos so much that his character was made a mainstay. He was nominated for a ‘Daytime Emmy Award’ for his role.
He landed the lead role in the CBS sitcom ‘Dreams’ in 1984 in which he played the aspiring musician ‘Gino Minnelli.’ The show was canceled after a season.
He was part of the main cast of the sitcom ‘You Again?’ in which he played the son of the character played by Jack Klugman. The show was aired on NBC from 1986 to 1987 for 26 episodes.
He got a big career breakthrough in 1987 when he was selected to play ‘Jesse Katsopolis’ in the sitcom ‘Full House.’ He portrayed an exterminator-turned-rock musician in the hugely popular series that completed 192 episodes before being taken off air in 1995.
As a musician, he has occasionally performed with his idol, ‘The Beach Boys.’ In 1992, he sang ‘Forever’ for the band’s album ‘Summer in Paradise.’ He also featured in a music video titled ‘Forever by Jesse and the Rippers.’
He played ‘Tony Gates’ in the medical drama television series ‘ER.’ His character was introduced during season 13 in the year 2005. He portrayed the character till 2009.
He also branched out into films with small roles in minor films. In 2000s, he appeared in movies like ‘Party Monster’ (2003), ‘Knots’ (2004), and ‘Farce of the Penguins’ (2006).
He portrayed ‘Karl Lindner’ in the 2008 television film ‘A Raisin in the Sun’ which was based on the play of the same name by Lorraine Hansberry. The film was critically acclaimed and was nominated for the ‘Emmy Award’ for ‘Outstanding Made For Television Movie.’
During the 2010-11 season, he made four appearances as ‘Dr. Carl Howell’ in the teen musical comedy drama ‘Glee.’ The series was very popular and had been nominated for 19 ‘Emmy Awards.’
Continue Reading Below
He was part of the recurring cast of the sitcom ‘The New Normal’ in which he played ‘Brice’ in five episodes from 2012 to 2013. He also plays a recurring role in the television drama series ‘Necessary Roughness.’
Stamos was seen in the film ‘My Big Fat Greek Wedding 2’ in 2016. The same year, he also played ‘Dr. Brock Holt’ in the second season of Fox’s black comedy series ‘Scream Queens.’
From 2018 to 2019, he played ‘Dr. Nicky’ in a psychological thriller television series titled ‘You.’ In 2019, he played ‘John Wilkes Booth’ in Netflix's comedy TV series ‘Historical Roasts.’ The same year, he was also seen in a television special titled ‘The Little Mermaid Live!’ in which he played ‘Chef Louis.’ 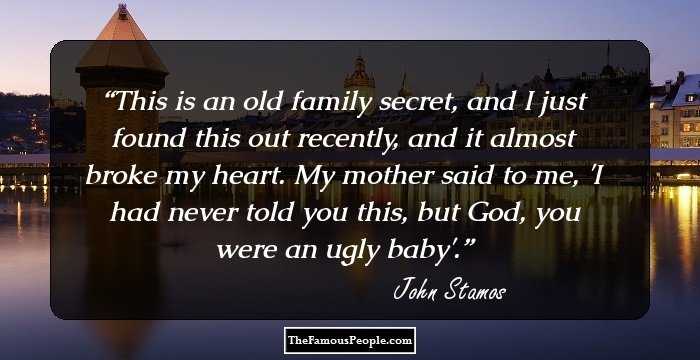 Quotes: Me, God, Family, Heart
Major Works
He is best known for his role as ‘Jesse Katsopolis’ in the sitcom series ‘Full House’ in which he played a rock musician who helps his brother-in-law raise his three daughters. The show was highly successful and ran from 1987 to 1995.
Awards & Achievements
He won the ‘Young Artist Award’ for ‘Best Young Actor in a Daytime Series’ in 1984 for his performance in ‘General Hospital.’
He was presented with the ‘T.V. Land Award’ for ‘Favorite Elvis Impersonation’ for ‘Full House’ in 2007.
He won the ‘People's Choice Award’ under the ‘Favorite Actor in a New TV Series’ category for ‘Grandfathered’ in 2016. 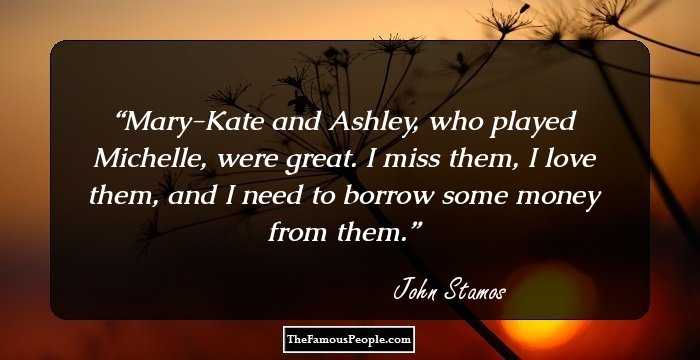 Quotes: Love, Money, Need
Personal Life & Legacy
He married super model Rebecca Romijn in 1998. They divorced in 2005.
He supports ‘Project Cuddle’—a non-profit organization dedicated to prevent baby abandonment—and has been serving as its spokesperson since 2005.
Stamos announced his engagement to model and actress Caitlin McHugh in 2017. The same year, they announced that they were expecting a child. They got married the following year, and welcomed their son who was born in April 2018.
In 2018, John and Caitlin Stamos announced their new jewelry line ‘St. Amos Jewelry.’ They also said that the proceedings from the jewelry line would go to ‘Childhelp’ foundation.
Trivia
This actor is a die-hard fan of the popular rock band ‘The Beach Boys.’ He has also performed with them.
He has a lifetime pass to ‘Disneyland’ which he purchased on ‘eBay.’

Quotes By John Stamos | Quote Of The Day | Top 100 Quotes

See the events in life of John Stamos in Chronological Order