John Milton was a very famous English poet, historian as well as a civil servant in the British government. He is considered to be the greatest writer of English verse after William Shakespeare and one of the most learned poets of all times. He became a prominent figure when England was passing through a time of huge religious and political turmoil. He took an active part in advocating the overthrow of a cruel monarchy and the establishment of a democratic government elected by its citizens. He wrote hundreds of pamphlets criticizing the role and influence of the monarchy and the clergy in the life of the citizens of the country and demanded for their freedom from religious and political oppression. He called upon the Catholic clergy to give up their control over religious thoughts and make Christianity a better religion. He was imprisoned for protesting against the monarchy and for proposing a free civil society. He had a unique style of writing that influenced poets who came after him. A large number of poets admired his skills as a poet but many of them did not accept his views on religion. The French and the American revolutions later were also influenced by his thoughts. British People
Non-Fiction Writers
British Men
Male Poets
Male Writers
Childhood & Early Life
John Milton was born in Cheapside in London, United Kingdom, on December 9, 1608. His father John Milton Sr. was a scrivener who prepared wills and deeds for others and his mother was Sarah Jeffrey, the daughter of a wealthy merchant.
He had an elder sister named Anne and a younger brother named Christopher. He also had other siblings who had died in their infancy.
John was a good student and loved poetry from a very young age. His father also composed music from whom he got his love for music.
He received private tuitions at home initially from a Scottish tutor named Thomas young who held an M.A. degree from the ‘University of St. Andrews’ and probably infused radical ideas into the young Milton.
After being tutored by Thomas Young, John joined the ‘St. Paul’s School’ in London in 1620 to study Greek, Latin and classical languages.
He wanted to become a priest in the ‘Church of England’ and got admitted to the ‘Christ’s College’ in 1625. He was expelled from the college for a brief period in 1626 due to some disagreement with his tutor Bishop William Chappell.
He was reinstated in the college in April 1626 and continued his study of ethics, logic, Latin, Greek, and Hebrew. During this time he composed poems in Latin.
He received his B.A. degree from the ‘Christ College’ in Cambridge in 1629 and was ranked fourth among twenty-four other candidates who had appeared for the examination.
He received his M.A. degree from the ‘Cambridge University’ in July 1632. 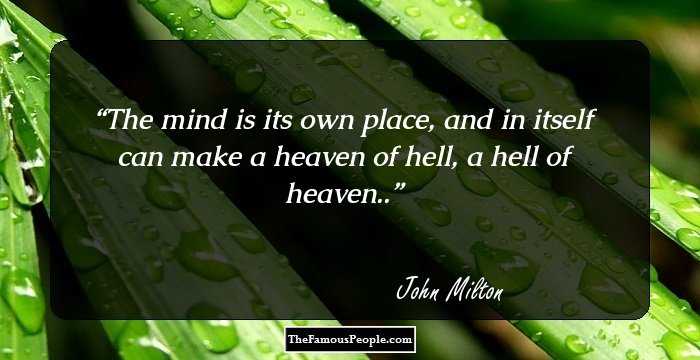 Continue Reading Below
Initial Writings
John Milton wrote his first serious poem in 1628 titled ‘On the Death of a Fair Infant, Dying of the Cough’ which was based on the sadness caused by the death of his sister’s baby.
In 1629 he wrote the poem on divine love titled ‘On the Morning of Christ’s Nativity’. He started to write verses more and more in English rather than in Latin.
In 1632 after getting his M.A. degree he shifted to Hammersmith where his family home was situated. Later he moved to his family’s country estate in Horton, Buckinghamshire, where he continued to study mathematics, history, literature and theology.
During these six years he got involved in the cultural and social life of the city and its suburbs and wrote some sonnets and lyrics which includes ‘A Mask’ which was a mixture of poetry, dances and songs.
In 1637 he wrote the poem ‘Lycidas’ which dealt with the reason why good people normally died at a young age.
During the period from 1638 to 1639 he went on a tour of Europe for 15 months. He spent most of his time in Rome and Florence in Italy. Wherever he visited, he was accepted easily into the social circles as he was able to speak a variety of languages. He could not make his trip to Greece and had to return to England as the political and religious scene back home had become bad with the start of the ‘Bishops’ War’. 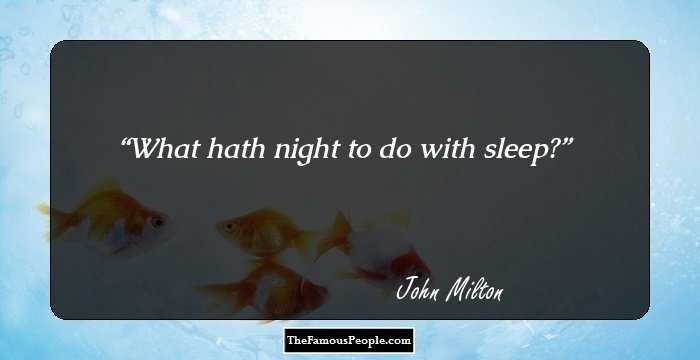 Mature Period
John Milton wrote hundreds of leaflets urging the Catholic bishops to release their hold on religious thoughts and practices during 1641 and 1642 when a civil war broke out in England between the Protestants and the Catholics led by King Charles. The war went on till 1649 when King Charles was defeated and executed.
In 1644 Milton came out with his work ‘Of Education’ which dealt with the topic of the development of discipline, ability, judgment and other traits in young boys.
Continue Reading Below
He also wrote ‘Areopagitica’ in the same year which championed the freedom of speech and discussion for men so that truth could prevail.
In 1649, after the war had ended, Milton wrote ‘The Tenure of Kings and Magistrates’ in which he condemned the tyranny perpetuated by kings and monarchs on their subjects who had the right to be free to decide their own fates.
Very soon after this, he was appointed as the secretary for foreign languages by the Cromwell government which had come to power. He held this post for a decade and translated state letters from English to Latin.
Period of Travails and Triumph
In 1659 he wrote a tract titled ‘A Treatise of Civil Power’ in which he repeated his appeal to separate the state from the church.
In another tract titled ‘Ready and Easy Way’ which he wrote in 1660, he advocated the formation of a democratic government where the citizens would be able to elect their representatives by voting freely.
When the monarchy was reestablished in 1660 with Charles II succeeding his father Charles I to the throne, Milton faced a lot of persecution for supporting the cause of the people in overthrowing the king. He was imprisoned for some time and many of his books were burnt publicly. He received a general pardon later.
Milton went through an unfortunate patch during this time when he lost his second wife in 1658. He dedicated a sonnet ‘To My late Departed Saint’ to her.
In 1667 he published ‘Paradise Lost’ which had 10 volumes and is considered as one of the greatest epics in English language. It took him several years from 1658 to 1664 to write this epic.
He came out with a sequel to this epic ‘Paradise Regained’ in 1671 which dealt with the rejection by Jesus Christ of the temptations created by Satan. In the same year he wrote another piece titled ‘Samson Agonistes’ in which he described how the Hebrew strongman succumbed to selfishness and passion.
Continue Reading Below
In 1673 John Milton published a collection of poems that he had written in 1645 with introductions in Latin and also a collection of letters that he had penned during his college days in Cambridge.
He wanted to publish the state papers he had written in Latin and a small history of Moscovia but could not fulfill his wish. Both were published after his death in 1676 and 1682 respectively. 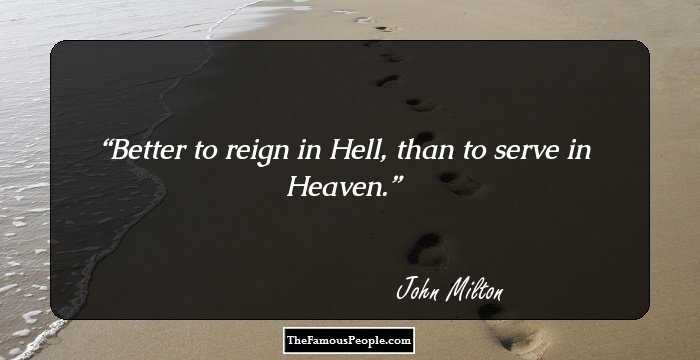 Major Works
John Milton’s greatest work was ‘Paradise Lost’ which was based on the Biblical stories of Creation, Adam and Eve and Satan. He also wrote some great plays which include ‘Comus’, ‘Samson Agonistes’ and ‘Arcades’.
Personal Life & Legacy
When he was 34 years old, John Milton married Mary Powell who was 17 years old in May 1642. She separated from him for some years because of his financial problems. They were united later and had four children named Anne, Mary, John and Deborah. Mary died in 1652 from complications during the birth of Deborah.
After his first wife’s death he married Katherine Woodcock in 1656 who also died two years later while giving birth to a daughter who also died.
He became completely blind in 1652 after losing his eyesight gradually over a few years.
He married Elizabeth Minshell in 1663 after his release from prison.
In 1673 John Milton got embroiled in a public controversy by writing ‘Of True Religion’ which was a defense of Protestantism.
He died in Chalfont St. Giles in the United Kingdom on November 8, 1674.
His biography in English was published by his nephew Edward Phillips in 1694.
His last manuscript ‘Christian Doctrine’ written in Latin was discovered, translated and published in 1825.
A monument was built in the ‘Poet’s Corner’ in ‘Westminster Abbey’ in his honor.

Quotes By John Milton | Quote Of The Day | Top 100 Quotes

See the events in life of John Milton in Chronological Order