Who is Ozzy Osbourne?

John Michael Osbourne, better known as Ozzy Osbourne, is a Grammy Award winning musician who rose to fame as the lead singer of the hard rock band Black Sabbath. The singer-cum-songwriter struggled through several childhood problems to become one of the most popular hard rock stars of his times. While in school he suffered from dyslexia and did not even complete his studies as family circumstances demanded he earn money. He formed his first musical band Rare Breed with Geezer Butler, but the band broke up after giving just two performances. The duo decided to try again and recruited guitarist Tony Iommi and drummer Bill Ward and together formed a band initially called Earth. Eventually they renamed this band as Black Sabbath and decided to follow the style of heavy blues music with melancholy lyrics and music. The band became an instant success with their debut album ‘Black Sabbath’ which peaked at number eight on the U.K. Albums Chart. They released the albums, ‘Paranoid’ and ‘Master of Reality’ in quick succession, both of which became smash hits with the fans - ‘Master of Reality’ went Double Platinum. Although a highly successful music artist, Osbourne has abused drugs and alcohol for most of his life.

Celebrities Who Have Had A Nose Job School Dropouts
Rock Singers
Lyricists & Songwriters
Hard Rock Singers
Childhood & Early Life
Ozzy was born as one of the six children of Jack Osbourne, a toolmaker, and Lilian, who worked in a car components firm. The family lived a modest middleclass life.
As a child, he dealt with a number of learning disabilities like dyslexia and attention deficit disorder.
He received little formal education and left school at 15 to find work. He did a number of menial jobs like a labourer, plumber, and apprentice toolmaker.
He had a brush with law as a teenager when he burglarized a clothes store and had to spend six weeks in Winson Green Prison. 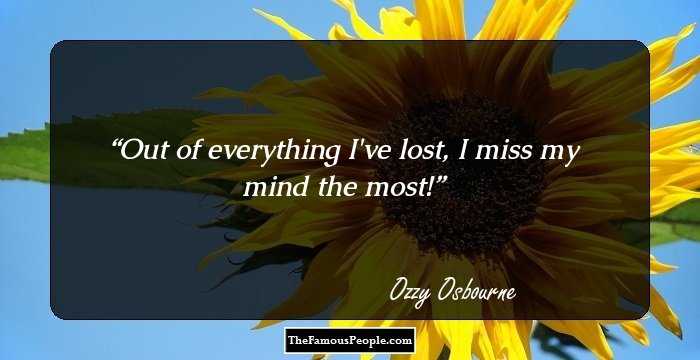 British Men
Male Singers
Male Musicians
British Singers
Career
In 1967, Osbourne teamed up with Geezer Butler to form his first band, Rare Breed. The band broke up after only two performances.
Osbourne and Butler collaborated with guitarist Tony Iommi and drummer Bill Ward to form another band, Earth. They renamed the band black Sabbath in August 1969, and chose to play a heavy blues style of music with underlying occult themes.
The band released their debut album, ‘Black Sabbath’ in February 1970. The album received negative reviews from music critics, but became a huge commercial success.
Prompted by the success of their debut, the band released their second album ‘Paranoid’ within a few months in September 1970. Many of the songs in this album, including ‘Iron Man’ and ‘Paranoid’ became the signature songs of the band.
‘Master of Reality’, the band’s third album, hit the stores in 1971, reaching the top ten in both the U.S. and U.K. It was the first time that the band had included acoustic songs in their album.
In 1972, they brought out the album ‘Black Sabbath Vol. 4’ in which they experimented with heavy sound. The band tried a new, more sensitive approach to music in this album which was well-received by the listeners.
In their fifth album ‘Sabbath Bloody Sabbath’, released in 1973, the band added more musical instruments to their orchestral set up. This album not only sold huge volumes, but also got favorable reviews from critics.
Over the next few years they released ‘Sabotage’ (1975), ‘Technical Ecstasy’ (1976) and ‘Never Say Die’ (1978).
By this time Osbourne was having serious issues with drugs and was expelled from the band in 1979.
Continue Reading Below
He began his solo career in 1981 with his debut album, ‘Blizzard of Ozz’. The album was a commercial success and went multi-platinum in the U.S. His second album, ‘Diary of a Madman’ was released the same year.
His album ‘Bark at the Moon’ released in 1983 and was the first album in which he was credited to have written all the songs himself. The album was certified Gold in the U.S.
His albums ‘The Ultimate Sin’ and ‘No Rest for the Wicked’ released in 1986 and 1988 respectively.
In the 1990s, he released only two studio albums—‘No More Tears’ (1991) and ‘Ozmossis’ (1995). Both became very popular with his fans.
Staring from the mid-1990s, he and his wife started organizing ‘Ozzfest’, an annual festival tour which featured various bands playing different genres of music like heavy metal, alternative metal, hardcore punk, and gothic metal.
He, along with his wife and kids, has appeared in a reality show, ‘The Osbournes’ that was first aired on MTV in 2002. The last episode of the show was aired in March 2005.
He had planned to retire during the 1990s but he later had a change of heart. He is still active in giving musical performances and his recent works include ‘Black Rain’ (2007) and ‘Scream’ (2010). 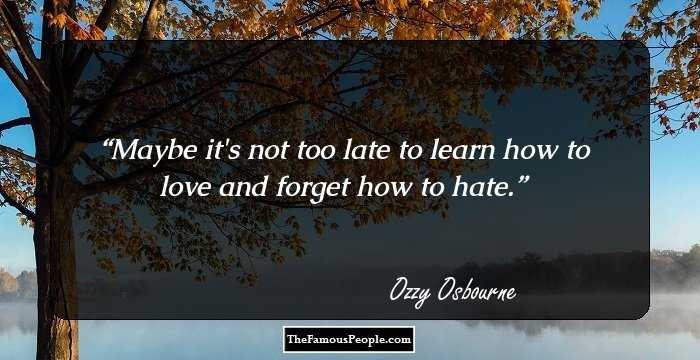 British Musicians
Sagittarius Singers
British Rock Singers
Sagittarius Musicians
Major Works
His band’s second album, ‘Paranoid’ (1970) was the work that defined the band’s music. Modern music critics have called the album "one of the greatest and most influential heavy metal albums of all time".
Continue Reading Below
His solo album, ‘No More Tears’ (1991) included his Grammy Award winning track ‘I Don’t Want to Change the World’. It was also one of his bestselling albums, being certified multi-platinum by The Recording Industry Association of America (RIAA).
One of his biggest professional achievements is the organizing of the annual festival tour, ‘Ozzfest’, which features performances by a variety of musical bands representing different genres of heavy metal and hard rock music. The first Ozzfest was held in 1996.
Osbourne and his family starred in a reality show, ‘The Osbournes’ which premiered on MTV in 2002. The program became the most viewed show on MTV in its first season and ran till March 2005.
Recommended Lists:

Sagittarius Rock Singers
British Hard Rock Singers
Male Lyricists & Songwriters
British Lyricists & Songwriters
Awards & Achievements
He won a Grammy Award for the Best Metal Performance for the track ‘I Don’t Want to Change the World’ in 1994.
He was inducted into the U.K. Music Hall of Fame both as a member of the band Black Sabbath and as a solo artist in 2005.
In 2006, he along with his former band mates at Black Sabbath was inducted into the U.S. Rock and Roll Hall of Fame. 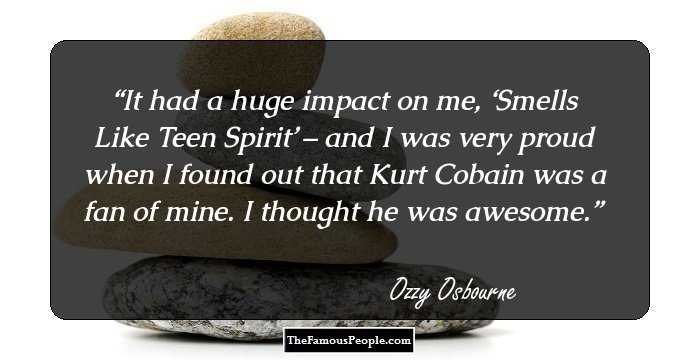 Sagittarius Men
Personal Life & Legacy
He was first married to Thelma Riley and adopted her son, Elliot Kingsley and also had two biological children with her. The marriage broke up due to his drug and alcohol problems.
He tied the nuptial knot for the second time with Sharon Arden in 1982. The couple has three children.
He has come into the media glare many times for his drug abuse and alcoholism, and for misbehaving in public places in an intoxicated state. He has often been criticized for being a bad influence on his teenage fans.
He published his memoir, ‘I am Ozzy’ in 2009.
Trivia
His music has earned him the name ‘Godfather of Heavy Metal’.
Ozzy Osbourne once bit off the head of a dove while releasing doves into the air as a sign of peace. He was intoxicated at that time. In another incident, he bit the head off a bat off while performing at the Veterans Memorial Auditorium in Des Moines, Iowa. He mistook bat as rubber.

Quotes By Ozzy Osbourne | Quote Of The Day | Top 100 Quotes

See the events in life of Ozzy Osbourne in Chronological Order