Advanced Search
John Leguizamo is an American actor, stand-up comedian, and film producer. He shot to fame with his role in the science fantasy comedy film ‘Super Mario Bros’, and gained further popularity with his supporting role in the crime drama ‘Carlito's Way’. Starting his career as a stand-up comedian in nightclubs, he made his film debut in ‘Casualties of War’ in 1989. Soon he received several film offers, the notable ones being the animated ‘Ice Age’, ‘Die Hard II’, ‘Regarding Henry’, ‘Hanging with the Homeboys,’ and ‘The Brothers García’. He is also an acclaimed stage actor. His performance in the play ‘Mambo Mouth’ earned him an Obie Award from the Village Voice, a Vanguard Award, an Outer Critics Circle Award, and a CableACE Award. His performance in ‘Freak’ garnered him additional success, and the play was turned into an HBO special. His onstage popularity led to his own television show ‘House of Buggin', aired on FOX Network, which further boosted his career. His roles in ‘To Wong Foo, Thanks for Everything! Julie Newmar’, and ‘Romeo + Juliet’, also earned him critical and commercial success. Leonardo DiCaprio
22nd July In History
DID WE MISS SOMEONE?
CLICK HERE AND TELL US
WE'LL MAKE SURE
THEY'RE HERE A.S.A.P
Quick Facts

American People
T V & Movie Producers
American Men
Cancer Actors
Male Comedians
Childhood & Early Life
John Leguizamo was born on July 22, 1964 in Bogotá, Colombia, to Alberto and Luz Leguizamo. His family migrated to the US when John was young and he grew up in Jackson Heights, a rough neighborhood in Queens, New York. His father was once an aspiring film director. His parents divorced when he was 14.
He attended the Joseph Pulitzer Middle School and the Murry Bergtraum High School. He began his theater career at NYU's Tisch School of the Arts, but eventually he dropped out to pursue a career in stand-up comedy. He also took theater classes at LIU Post. He was once arrested for truancy, and once for hopping a subway turnstyle.
In order to "straighten him out," he was sent back to Colombia for a year, where continued his mischiefs. He also attended a local acting school, which he funded by working at Kentucky Fried Chicken.
He had a stint at New York University in 1991, but he left school to join the Off Center Theater, a comedy troupe in Manhattan. 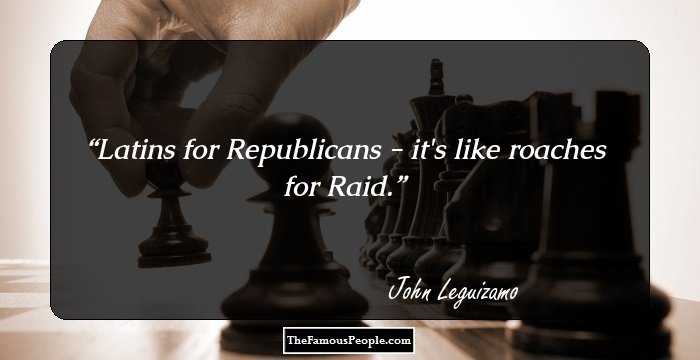 Quotes: Like
Continue Reading Below
Career
Starting his career as a stand-up comedian in New York nightclubs in 1984, John Leguizamo made his television debut in 1986 with a small role in ‘Miami Vice’.
In 1991, he wrote and performed seven different characters in the play ‘Mambo Mouth’, an Off-Broadway production. In 1992, he played John Castillo in the film ‘Whispers in the Dark’.
He then bagged the lead role of Luigi in the film ‘Super Mario Bros.’ in 1993. The film helped him to make a position for himself in Hollywood. In the same year, he played an important role as "Benny Blanco from the Bronx," in the film ‘Carlito's Way’, which earned him more serious roles.
In 1993, he again wrote and performed in the play ‘Spic-O-Rama’, where his performance of making fun of the stereotyping of Latinos in the US earned him critical acclaims. The play was filmed for HBO.
He created, produced, wrote, and performed in the 1995 television variety show ‘House of Buggin' aired on Fox. However, due to poor ratings, the show was concluded even before the completion of the first season.
He played a variety of roles in several films over the ensuing years. In 1996, he portrayed Tybalt Capulet in ‘Romeo + Juliet’, which earned him critical appraise. In 1997, he starred in ‘Spawn’, and ‘The Pest’, in which he played the lead actor’s role.
For the first time, he worked on Broadway in 1998, when he acted in ‘Freak’, the semi-autobiographical one-person play, which was also presented on HBO in October 1998 under Spike Lee’s direction.
'John Leguizamo LIVE’, a CD compilation of his stage routines, was released in 2001. In one of the bits, he narrated the history and culture of Latinos in America, and he voiced each member.
In 2002, he wrote and acted in ‘Sexaholix... A Love Story’, which centered on his love life and how he started his own family.
Continue Reading Below
In 2005-06, he was cast in the television show ‘ER’, where he portrayed the emotionally disturbed Dr. Victor Clemente. He revealed in an interview that he was unhappy and depressed playing the role, and was relieved when the character was taken off the show.
His memoir, ‘Pimps, Hos, Playa Hatas and All the Rest of My Hollywood Friends: My Life’, was released in October 2006. He was candid while mentioning his experiences with other celebrities in his memoir.
In 2007, he appeared in the Spike TV drama series ‘The Kill Point’. The show was about ex-war veterans on a bank robbery, which leads them to a hostage situation.
His semi-autobiographical one-man play, ‘Klass Klown’, based on his memoir ‘Pimps, Hos, Playa Hatas, and All the Rest of My Hollywood Friends: My Life’ premiered in June 2010. The show was played at various theaters in the US. A CD of the show was also released. The show was later renamed as ‘Ghetto Klown’. In the same year, he guest-starred as himself in the TV series ‘The Electric Company’.
In 2013, he started filming ‘The Crash’, which was eventually released in 2017. In 2014, he appeared in the film ‘Chef’, and also played the role of a drug dealer in the movie ‘American Ultra’.
Abrams ComicArts published the novel adaptation of his own Broadway show, ‘Ghetto Klown’ in October 2015. The graphic novel revealed many incidents from his life and career.
In 2017, he revealed his singing talent when he sang on ‘Almost Like Praying’, a charitable song created by Lin-Manuel Miranda. Revenues from the song went to the Hispanic Federation to send relief to people affected by Hurricane Maria in Puerto Rico. In the same year, he also performed in ‘Latin History for Morons’, a show about the participation of Latin American in US history. 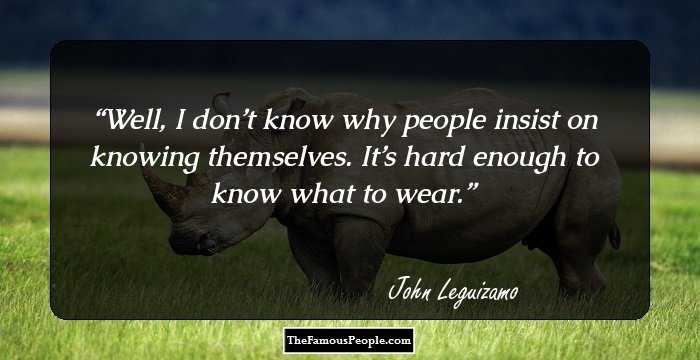 Quotes: I
Major Works
John Leguizamo was listed as one of the 12 ‘Promising New Actors of 1991’ in John Willis' Screen Worlds Vol. 43 for his performance in the theater for ‘Mambo Mouth.’
His lead role in the film ‘Super Mario Bros’ was one of his memorable roles. His portrayal of Luigi, the slightly younger but taller fraternal twin brother of Mario, boosted his career and earned him better comedic roles.
Awards & Achievements
The play ‘Mambo Mouth’ won John Leguizamo an Obie Award and an Outer Critics Award. The play ‘Freak’ on HBO won him the Drama Desk Award for Outstanding One-Person Show.
He received a Golden Globe nomination for Best Supporting Actor for his performance in ‘To Wong Foo, Thanks for Everything! Julie Newmar’.
In 2008, he won the Rita Moreno HOLA Award for Excellence from the Hispanic Organization of Latin Actors (HOLA). In 2011, he was given the Made in NY Award from New York City.
His performance in the play ‘Klass Klown’, which was about his own path to stardom, won him the Outer Critics Circle Award for Outstanding Solo Performance, and the Drama Desk Award for Outstanding Solo Performance.
Personal Life
John Leguizamo married actress Yelba Osorio in 1994 and they divorced in 1996.
On June 28, 2003, he married Justine Maurer. Their daughter Allegra Sky was born in 1999, and son Ryder Lee ‘Lucas was born in 2000.

See the events in life of John Leguizamo in Chronological Order