John Kasich is an American politician from the ‘Republican Party,’ who has served as a representative from Ohio in the ‘House of Representatives’ and has also been the governor of Ohio. Born and raised in Pittsburgh, Pennsylvania, he began his political career soon after graduating from the ‘Ohio State University’ in 1974. After serving as an aide for a senator, he won the elections for a position in the ‘State Senate’ of Ohio, representing the 15th congressional district. In 1983, he began a long term in the ‘U.S. House of Representatives,’ representing Ohio’s 12th district, and won 9 elections consecutively, to remain in the position until 2001. In 2001, he began working for private-sector banking companies. He joined electoral politics yet again in 2010, when he ran for the governorship of Ohio and won. He won again in 2014. Following this, he also tried to contest as the presidential candidate from the ‘Republican Party,’ but lost to Donald Trump. He has also chaired the ‘House Budget Committee.’ He has crossed party lines on many occasions, working for many acts and laws. 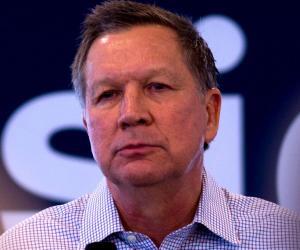 Kamala Harris
Political Leaders #636
Leaders #1276
DID WE MISS SOMEONE?
CLICK HERE AND TELL US
WE'LL MAKE SURE
THEY'RE HERE A.S.A.P
Quick Facts

American People
Tall Celebrities
Tall Male Celebrities
Male Leaders
Taurus Leaders
Childhood & Early Life
John Kasich was born John Richard Kasich Jr., on May 13, 1952, in Pittsburgh, Pennsylvania, U.S., to Anne Kasich and John Kasich Sr. John is of Croatian and Czech ancestry. His parents were ardently religious and followed Roman Catholicism. He was raised in a middle-class family, and his parents worked at a nearby postal office.
John spent his childhood in a Pittsburgh suburb and attended local schools. He followed his parents into their Christian beliefs and attended church regularly. He was the eldest of the three kids in the family. He was so engrossed in his faith that he once considered becoming a priest. One of his childhood friends stated that he was even dreaming of become a pope.
Following his high-school graduation from Pittsburgh, he attended the ‘Ohio State University,’ which changed his perception about his life and faith. Soon, he became moderate in his religious beliefs.

While in college, John Kasich developed an interest in politics, especially when he met President Richard Nixon in the early 1970s. Back then, he was in his freshman year of college. He met the principal of his college, who was getting ready to meet President Nixon. John wanted to tag along, but his request was denied. He then asked his college principal to deliver his letter to Nixon. The trick worked, and Nixon read the letter. John was granted a 5-minute meeting with the president, which went on for 20 minutes.

In 1974, he completed his bachelor’s degree in political science from the ‘Ohio State University.’ Rather than taking up some other job, he decided to venture into politics immediately.
Continue Reading Below
You May Like

Who Is The Most Popular BTS Member?
Political Career

Soon after graduating college, John Kasich joined the ‘Ohio Senate’ and worked as an aide to Buz Lukens, a senator from the ‘Republican Party.’ He contested in his first elections at 26, in 1978, when he stood against the incumbent ‘Democratic Party’ leader, for the ‘State Senate.’ He was a restless campaigner, which worked in his favor. He ended up winning the elections by gaining 56% of the total votes.

He represented the 15th district of Ohio state and became the second-youngest person to ever sit in the ‘State Senate’ of Ohio. The ‘Republican Party’ had complete control over the ‘Ohio Senate’ by 1980, but John worked his way up. He also opposed a budget proposal made by his party, which he believed would raise taxes, and ended up writing his own budget proposal instead. He served in the ‘State Senate’ for one term.

In 1982, John Kasich eyed a seat in the ‘U.S. House of Representatives’ and embarked on a long and hard campaign. He was contesting against the ‘Democratic Party’s incumbent congressman, Bob Shamansky, who was a people’s favorite. John secured a close victory in the general elections and entered the ‘House of Representatives,’ representing Ohio’s 12th congressional district.

Known as a fiscal conservative during his nine 2-year terms in the ‘Congress’ (until 2001), he worked toward minimizing the corporate tax loopholes. He was also known for his insistence toward reducing the government spending and his efforts to balance out the budget.
There were also many instances when he opposed his own party, such as in the case of the ‘B-2 Stealth Bomber’ program, which he considered to be a total waste of resources. Moving away from the party budgeting, he began creating his own budget since 1989, working as an “alternative” government.
He had shown impeccable understanding of financial matters. Thus, despite his image of a “rebel” in the party, he was made a member of the ‘House Budget Committee’ in 1993, when the ‘Democratic Party’ won the presidential election and Bill Clinton came to power. As a ranking member of the ‘Budget Committee,’ he prepared his own health-care plan, in opposition to Clinton’s health-care plan of 1993. John was a key member in the committee that authored the reform.

In 1994, John Kasich sided with President Bill Clinton to pass the ‘Federal Assault Weapons Ban.’ The ban was eventually passed, and he was among the 42 ‘Republican’ leaders who supported the ‘Democratic’ president into passing the law.

After the 1994 elections, the ‘Republican Party’ ended up with a majority in the ‘U.S. Congress.’ Soon after that, John was made the chairman of the ‘House Budget Committee.’ In the presidential campaign of 1996, the ‘Republican’ candidate, Bob Dole, had almost selected John as his vice president, but he eventually went with Jack Kemp instead.

In 1997, John Kasich was all over the news owing to the passing of the ‘Balanced Budget Act’ of 1997. It was a historic act that balanced the federal budget after many decades. John was hailed as the chief architect of the budget.

Continue Reading Below
In 1999, he announced that he was looking forward to be a presidential candidate in the upcoming elections. However, he was not nominated by his party, as George W. Bush was chosen instead. Following this, John decided not to contest for the ‘Congress’ anymore and took a break from active politics.
In the early 2000s, he moved to work with ‘Fox News,’ as a host for their show ‘Heartland with John Kasich.’ He also appeared on the TV show ‘Hannity & Colmes.’

Additionally, John Kasich also began his business career by joining the boards of several companies, such as ‘Invacare Corp.’ He also worked with ‘Lehman Brothers’ for many years, until they filed for bankruptcy in 2008.

The ‘Republican Party’ tried their best to bring back John into active politics. It was expected that he would be running for Ohio’s governorship in the 2006 election, but he denied such rumors. In May 2009, however, he filed his nomination for the governorship of Ohio, against the incumbent governor, Ted Strickland (from the ‘Democratic Party’).
In 2011, he signed a law that restricted the government workers’ right of collective bargaining. The law was annulled in 2011.
He deviated from his party’s stand on President Barack Obama’s ‘Medicaid’ and supported the expansion of the coverage for low-income residents of the United States. He was also against his party’s views on same sex-marriage and opposed a ban on the LGBT marriage act, which had many top party leaders miffed with him. He was extremely popular with the Ohio voters and won the governorship elections again in 2014, this time with 64% votes.
His second consecutive victory also made him a prime presidential candidate from the ‘Republican Party’ in 2015. He, however, lost to Donald Trump, although he was the closest contender. His tenure as the governor of Ohio ended in 2019.
Family & Personal Life
John Kasich married Mary Lee Griffith in 1975. They divorced in 1980. They had no children together.
In 1997, he married Karen Waldbillig. They had twin daughters.
John lost both his parents in a car accident in 1987. He has since been a follower of the Anglican faith. However, in college, he had denounced his faith in God.

See the events in life of John Kasich in Chronological Order