John Richard Hersey was a writer and journalist who was one of the first western journalists to cover the events in Hiroshima after the atom bomb explosion on 6th August 1945. He decided to write about the aftermath of the explosion and selected six survivors whose experiences he chronicled in an issue of the ‘New Yorker’. Later on he published the book as ‘Hiroshima’. As a journalist he was greatly respected for his writing style and is considered one of the earliest journalists to practice ‘New Journalism’—the usage of unconventional literary techniques in journalism. He was a big fan of the writer Ralph Waldo Ellison whom he admired for his storytelling techniques. Hersey began his journalistic career working for the ‘Time’. He covered fighting in Europe and Asia during the World War II. Some months after the Hiroshima bombing he traveled to Japan to report on the devastation caused to the country. There he met six survivors whom he interviewed for his report—his account of the aftermath of the bombing is said to be one of the finest pieces of American journalism of the 20th century. Based on his experiences as a war journalist, he wrote the novel ‘A Bell for Adano’ which won the Pulitzer Prize. American Celebrities
Non-Fiction Writers
American Men
Yale University
Male Writers
Childhood & Early Life
He was born in China to American parents Roscoe and Grace Baird Hersey. Both his parents were Protestant missionaries working with the Young Men’s Christian Association. He learned Chinese before he learned English.
His family returned to the U.S. when Hersey was ten years old. He received his primary education from Briarcliff High School and later went to the Hotchkiss School from 1927 to 1932.
For his higher education he went to Yale and graduated in 1936. After that he became a graduate student at the University of Cambridge as a Mellon Fellow. 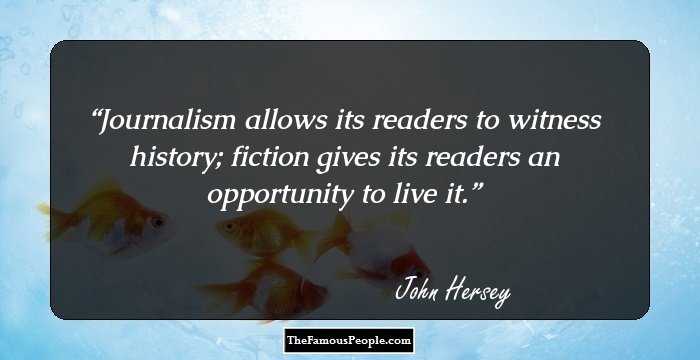 The Hottest Male Celebrities With The Best Abs
Career
He took up his first job as a secretary for the author Sinclair Lewis in 1937. He used to spent hours copying pages of a play the great author was working upon. However, he found this job to be extremely boring and quit.
He found work with the ‘Time’ magazine in late 1937. Ironically, an essay he had written about the poor quality of the magazine was what that got him the job. The World War II had begun by 1939 and he was sent to the Far East to cover the war.
He published his first book, ‘Men on Bataan’in 1942 followed by ‘Into the Valley’ in 1943. He also wrote for the ‘Life’ magazine and ‘The New Yorker’ on a freelance basis.
In 1944, he wrote his most famous novel, ‘A Bell for Adano’ which told the story of an Italian-American officer in Sicily during the World War II who helps the people of Adano in finding a replacement for the bell that the Fascists had melted down for usage in rifle barrels.
During the winter of 1945-46 he was sent to Japan by ‘The New Yorker’ to cover the reconstruction of the country devastated by the atomic bombing. There he found a document written by a Jesuit missionary who had survived the horrible experience. He sought the help of the missionary in seeking out other survivors whose stories he chronicled in an issue of his paper in 1946.
The 31,000-word article on the Hiroshima bombing and its aftermath that was first published in ‘The New Yorker’ was published as a book, ‘Hiroshima’, within weeks of the article’s appearance in 1946.
In 1950, he published the novel, ‘The Wall’ which is written in the form of a rediscovered journal. The book gave a convincing account of the destruction of the Warsaw Ghetto, the largest of the Jewish ghettos established by Nazi Germany during the Holocaust. Interestingly, the author himself had never been there in person.
He wrote an article about the dullness of grammar school readers in an issue of ‘Life’ magazine in 1954, titled ‘Why Do Students Bog Down on First R? A Local Committee Sheds Light on a National Problem: Reading’.
He was interested in education and found the public educational system in America to be very unsatisfactory. In 1960, he published the novel ‘The Child Buyer’ in which he advocated a system encouraging individual thought, freedom, integrity and a better understanding of the human mind.
Continue Reading Below
He was the Master at Pierson College at Yale from 1965 to 1970. He also spent a year as Writer-in-Residence at the American Academy in Rome. He used to teach two writing courses on fiction and non-fiction to undergraduates for 18 years; he taught his last class in 1984.
He returned to Hiroshima in 1985 and wrote a follow-up to his original story, titled ‘Hiroshima: The Aftermath’ which was published in ‘The New Yorker’ in its July issue. 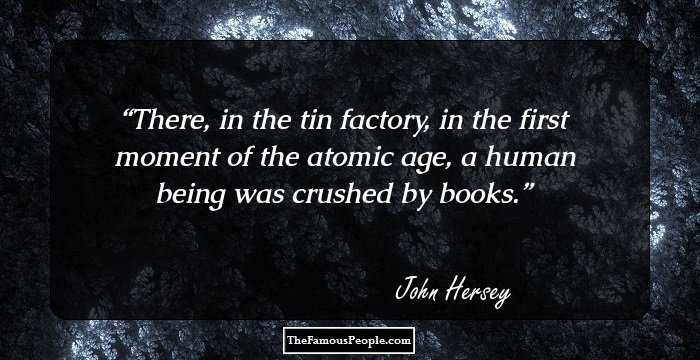 Quotes: Books
Major Works
His Pulitzer Prize winning novel, ‘A Bell for Adano’ deals with the story of an army officer who helps the people of the fictional town, Adano, in getting a replacement for the town bell which was destroyed by the Fascists. The novel was hugely popular and was considered a classic study in leadership.
Awards & Achievements
He won the Pulitzer Prize in 1945 for his novel ‘A Bell for Adano’. 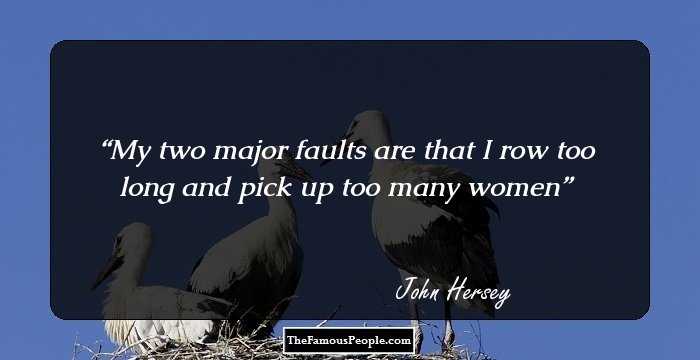 Quotes: Women, I
Personal Life & Legacy
He married Frances Ann Cannon in 1940. The couple divorced in 1958. His second marriage was to Barbara Day Addams Kaufman. He had five children and six grandchildren.
He suffered from cancer and died in 1993.
Though he was a much respected journalist and author, he was also accused of being a compulsive plagiarist.
The John Hersey Prize at Yale was created in his honour in 1985 by his students. The prize is given to recognize "a senior or junior for a body of journalistic work reflecting the spirit and ideals of John Hersey: engagement with moral and social issues, responsible reportage and consciousness of craftsmanship."
Recommended Lists:
Media Personalities #1051
You May Like

Quotes By John Hersey | Quote Of The Day | Top 100 Quotes

See the events in life of John Hersey in Chronological Order