Advanced Search
John Harold Johnson was an African-American businessman and publisher, who founded the Johnson Publishing Company. Losing his father at the age of six, he was brought up by his mother and his stepfather, first in Arkansas City and then in Chicago. Having to struggle from an early childhood, he promised himself that he would one day become successful in life. True to his word, he launched ‘Negro Digest’—a popular African-American magazine—at the age of 24, without the advantage of any bank loan or advertisement. Using a marketing technique that nobody had thought of before, he earned enough to be able to launch his second publication ‘Ebony’ within three years. Thereafter, he launched ‘Jet’, slowly diverting into cosmetics, radio stations, book publishing and television production. While building his empire, he also created a generation of photographers, advertisers, marketers, and circulation specialists from the African-American community, bringing out their hidden potential. By 1982, he was wealthy enough to become the first African-American to appear on the Forbes 400 list. American Celebrities
Black Business People
Black Media Personalities
American Men
American Publishers
Childhood & Early Years
John Harold Johnson was born on January 19, 1918 as Johnny Johnson in Arkansas City, USA. His father, Leroy Johnson, son of a slave, died in a sawmill accident when Johnny was six years old. Thereafter, he was raised by his mother, Gertrude Johnson, who worked as a camp cook.
His father’s death forced Johnson to start working from an early age. In an interview to Jim Hoskins, author of ‘Black Stars: African-American Entrepreneurs’, he had later said, "I was a working child. I learned how to work before I learned how to play."
Despite hardship, his mother was fully aware of the importance of education. Therefore, she insisted that Johnson attend school, enrolling him into an elementary school, meant for black students. Meanwhile in 1927, she married James Williams, who later became a dominant force in Johnson’s life.
The school he attended was only up to eighth grade. Since there was no high school for blacks in the racially segregated Arkansas, Gertrude decided to move to the north, which offered better prospect for the blacks. Therefore, she concentrated on earning more while Johnson repeated his eighth grade.
In 1933, Johnson and his mother traveled to Chicago, visiting the World Trade Fair being held there. The city was then considered a Mecca for the emigrating blacks and seeing the opportunity, Gertrude decided to stay back. His stepfather, James William, also joined them at Chicago.
Unfortunately, it was the middle of the Great Depression. While Johnson started going to Wendell Phillips High School, his mother and stepfather started looking for jobs; but without success. Ultimately, they very reluctantly applied for welfare.
Neither Johnson nor his mother cherished living under welfare, which was granted for two years. Sometime now, Johnson moved from Wendell Philips to DuSable High School. In both these schools, he studied with middle-class Blacks, having to suffer taunts not only for his tattered clothes, but also for his country-ways.
Fuelled by the taunts he had to endure, Johnson made up his mind to establish himself. He therefore began to study self-improvement books at night. All his efforts paid off when he was elected class president, distinguishing himself for his leadership quality.
He also flourished as the editor of the school newspaper and manager of the class yearbook. Later, he joined the French Club and became the president of the student council. Simultaneously, he secured a job with the National Youth Administration, a New Deal project.
In 1936, Johnson graduated with honors, receiving a $200 tuition scholarship to the University of Chicago. However, not being able to figure out how he would meet other expenses, he planned to give it up. But fate willed otherwise.
Soon after the graduation ceremony, Johnson and some other students were invited to a dinner by the National Urban League, a civil rights organization based in New York. There Johnson was asked to give a speech. Harry H. Pace, President of Supreme Liberty Life Insurance Company (SLL), was one the invitees.
Pace was so impressed by Johnson’s speech that he offered him a job so that he could utilize his $200 scholarship and continue his study. Accordingly Johnson began his career as a part-time office boy at SLL on September 1, 1936, concurrently continuing his studies at the University of Chicago. 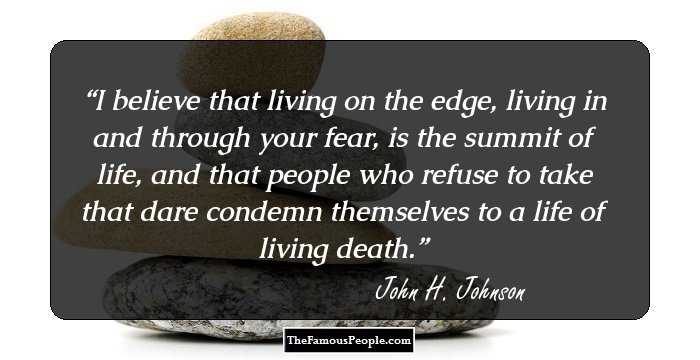 See the events in life of John H. Johnson in Chronological Order