John Demjanjuk was a former Nazi guard in the Sobibór extermination camp in the occupied Poland, convicted in Germany for assisting in the murder of 28,060 Jews. During World War II, he was drafted into the Soviet Red Army and became a German Prisoner Of War (POW). After undergoing special training, he became a camp guard. After the war was over, Demjanjuk changed his name from ‘Ivan’ to ‘John’ and became an American citizen. However, investigations proved that he had hidden information about his Nazi past to get the US citizenship. In spite of his steadfast denial of any involvement in the Nazi holocaust, 11 holocaust survivors identified him as ‘Ivan the Terrible’ who supplied gas to the Nazis. He was freed due to insufficient evidence and his citizenship was reinstated but he was again deported to Germany when the German federal court charged him with accessory to murder. He was found guilty and sentenced to five years in prison. However, Demjanjuk died before his appeal could be heard. This meant he was legally innocent and died as a free countryman. This was the first time in German legal history that a camp guard was tried even though there was no concrete evidence of him being involved in the genocide of Jews. 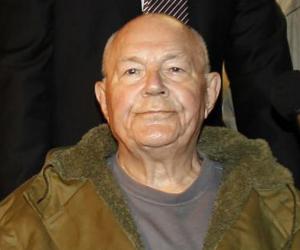 American Celebrities
Ukrainian Celebrities
Ukrainian Men
Aries Criminals
Male Criminals
American Criminals
Childhood & Early Life
Demjanjuk was born in Dubovi Makharyntsi, Berdychiv uyezd, Kiev Governorate, Ukrainian Replublic on 3 April 1920.
He grew up and survived the famine in Ukraine called the Holodomor.
Initially, Demjanjuk was a tractor driver on a Soviet collective farm.
In 1941, when Germany attacked Soviet-occupied Poland, he was included into the Red Army.
After the Soviet soldiers were defeated in a battle in Eastern Crimea, Demjanjuk became a German prisoner of war and was moved to a Nazi German concentration camp.
He requested to be sent to the Trawniki concentration camp division where the Hiwi guards were trained. He later served in Majdanek, Sobibor and Flossenbürg Nazi camps.
On 9 February 1952, Demjanjuk arrived in New York City and on 14 November 1958, he was granted the citizenship of the United States.
His family then moved to the Cleveland suburb of Seven Hills, where he became a UAW auto-worker at the Ford auto plant.
In August 1977, at the request of the Justice Department, the INS investigated the background of John Demjanjuk and found out that he had concealed his engagement with the Nazi concentration camps on his immigration application.
Continue Reading Below
You May Like

Who Is The Greatest Female Warrior In History?
Trials
In October 1983, Israel issued a request for Demjanjuk to stand trial in the Israeli court under the Nazis and Nazi Collaborators Law of 1950.
He was deported to Israel and his trial took place in the Jerusalem District Court between 26 November 1986 and 18 April 1988. He was charged with being the "Ivan the Terrible" who worked in the Nazi death camps.
The trial ended in April 1988 with a conviction and the Israeli court sentenced him to death by hanging.
In August 1993, a higher appeal was made to Israeli Supreme Court and the initial ruling against him was dismissed because of lack of proper evidence.
In 1988, the United States reinstated his citizenship.
In February 2002, Cleveland District Court revoked his citizenship again when an investigation into his work as a member of the SS-Run unit was undertaken. On 30 April 2004, the 6th US Circuit Court of Appeals ruled that Demjanjuk could be again stripped of his US citizenship.
In December 2005, an US immigration judge ordered that Demjanjuk can be deported either to Germany, Poland, or the Ukraine
In June 2008, Germany announced his deportation to stand trial for war crimes in Munich.
In March 2009, German federal court charged Demjanjuk with assisting in the murder of more than 29,000 Jewish prisoners at the Sobibor death camp.
Continue Reading Below
On Monday May 11, 2009, Demjanjuk was deported at the order of the German Foreign Ministry from his home in Cleveland, Ohio, United States to Germany.
Demjanjuk’s family tried very hard to cancel the trial on the pretext of his poor health but were all unsuccessful.
On 30 November 2009, Demjanjuk's trial began in Munich. Thirty-five joint plaintiffs were admitted to document the case, which included four survivors of the Sobibor concentration camp and twenty-six relatives of victims.
In February 2010, Alexei Vaitsen, a Holocaust survivor and a Sobibor survivor claimed that he recognized Demjanjuk as being one of the guards, however, the prosecuting attorney and defense lawyer were not entirely convinced about this particular claim.
On April 14, 2010, Anton Dallmeyer, an expert witness, stated under oath that the typeset and handwriting on an ID card of Demjanjuk matched four other ID cards that were issued at the SS training camp at Trawniki.
On May 12, 2011, John Demjanjuk was found guilty of all the charges. The German court sentenced the 91-year old to five years in prison for being an accessory to the murder of 27, 9000 Jews.
However, because Demjanjuk died before his appeal could be heard, his conviction of May 2011 was invalidated and he died a legally innocent man.
Personal Life
John Demjanjuk died at a home for the elderly in Bad Feilnbach, Germany on 17 March 2012, at the age of 91.
On 31 March 2012, he was buried at a secret US location, now the Ukrainian section of the Brooklyn Heights cemetery in Parma Ohio.
On 12 April 2012, Demjanjuk's attorney appealed to posthumously restore his US citizenship, which was overruled by the 6th US Circuit Court of Appeals in Cincinnati.
In June 2012, his attorney filed a complaint claiming that the pain medication Novalgin that had been given to Demjanjuk led to his death. The investigation was closed in November 2012 due to lack of evidence.
He is survived by his wife Vera and three children — John Jr, Lydia and Irene.
You May Like

See the events in life of John Demjanjuk in Chronological Order