John D. Rockefeller Jr. was an American philanthropist, financier and conservationist. The only son of John D, Rockefeller, the founder of the Standard Oil, he is believed to have donated over $537 million over his lifetime to various causes, notably in educational establishments, leaving around $240 million for his own family. Modest, unaffected, and unostentatious, he served as a director of Standard Oil for around thirteen years before resigning from his post to concentrate on his philanthropy, helping to establish institutions like Rockefeller University, General Education Board,  Rockefeller Foundation etc. However, the goodwill he thus created was shortly destroyed by what later became known as Ludlow Massacre and he was falsely accused of orchestrating the event. Nevertheless, he continued with his work, building Rockefeller Center during the depression, later making sure that the United Nations remains in the city by donating land. He also purchased and donated land for creating national parks across USA and took up many reconstruction works at home and abroad. Laurance Rockef...
DID WE MISS SOMEONE?
CLICK HERE AND TELL US
WE'LL MAKE SURE
THEY'RE HERE A.S.A.P
Quick Facts

His mother, Laura Celestia Spelman Rockefeller, was a well-known abolitionist and played an important role in her husband’s career. Rockefeller Junior had four elder sisters; Elizabeth, Alice, Alta, and Edith. Among them, Alice died in infancy, while the others grew up to play an important part in the society.

With the family’s social life centering on the Baptist Church, the siblings were taught to lead a disciplined, frugal, and religious life. He would later say, "My mother and father raised but one question: Is it right, is it duty?"

Young John Rockfeller was educated at home until the age of ten and started attending regular schools only after the family moved to New York City in 1884.  He was a bright and earnest student, but was quite insecure, which resulted in the development of a stress related disorder in 1887.

In 1888, he was moved to Browning School, set up in the same year at one of their houses on West 55th Street, from where he graduated in 1893.  During this period, he became very close to his parents, who reciprocated his affection, concurrently continuing with their moral indoctrination.

In 1893, he joined Brown University in Providence, Rhode Island, where he took a dozen courses in the social sciences, eventually graduating from there in 1897. During this period, he was also a member of Alpha Delta Phi and was elected to Phi Beta Kappa.

At Brown University, he found himself in a totally different environment and came in contact with new people and ideas. He studied Karl Marx's Das Kapital and learnt about the new theories that applied scientific knowledge to solve economic and social problems etc. All these helped him to evolve.

In 1897, John D. Rockefeller, Sr. retired as the chairman of the Standard Oil, a flourishing oil company he co-founded in 1870. Same year in October, on graduating from Brown, John D. Rockefeller Jr. joined the business, largely to please his father, to whom he was genuinely devoted.

Setting up his office at 26 Broadway in New York, John D. Rockefeller Jr.  began working alongside Frederick Gates, hoping to find a meaningful role in his father’s vast empire, determined to do what was required of him. By 1900, he had become closely involved with the running of the business.

In 1901, he became a director at U.S. Steel Company. Side by side, he started focusing on the family’s philanthropic activities and helped to establish Rockefeller Institute of Medical Research in 1901. Later renamed as Rockefeller University, it was America's first biomedical research institute.

In 1902, he played an important role in establishing General Education Board. Financed mainly by his father and formed with the aim of supporting higher education and medical schools in the United States, it helped both Black and White schools in South, concurrently modernizing agriculture in that area.

Although he was determined to carry on his duty as one of the directors of the Standard Oil Company, his retiring nature and moralistic upbringing stopped him from jumping wholeheartedly into it.  Soon, he grew disenchanted with many business policies as well controversies surrounding the company.

He was especially disheartened when allegations of unfair competitive practices used by Standard Oil Company began to surface. By 1908, he found it hard to remain associated with such practices, eventually resigning from his position as Director of the Standard Oil and the U.S. Steel Company in 1910.

Continuing to involve himself in philanthropic activities, John D.  Rockefeller Jr. launched The Rockefeller Sanitary Commission for the Eradication of Hookworm in 1909. Disbanded in 1914, it worked to eradicate hookworm diseases in American South and was subsequently succeeded by the International Health Division of the Rockefeller Foundation, established in May 1913.

In 1913, he established the Bureau of Social Hygiene, which was involved with issues like prostitution and venereal disease, concurrently supporting birth control clinics and research. However, the goodwill created by his philanthropic activities soon took a beating and his name was dragged into a terrible tragedy.

In September 1913, workers of the Colorado Fuel and Iron Company, in which the Rockefeller family had 40% stock holding, went on a strike over deadly working conditions and low pay, eventually shutting down the company. The company also brought in strikebreakers, resulting in tension between the two groups.

Matters came to a head on April 20, 1914 when fighting erupted in Ludlow between the striking workers and the militia, resulting in the death of 21 people, including three women and eleven children. As Rockefeller Sr. was vehemently against strikes, it was assumed that the company had orchestrated the massacre.

Although John D. Rockefeller Jr. had been trying to defuse the tension, attending United States Congressional Hearing, labor leaders as well as the liberals accused him of siding with the unsympathetic management and thus intensifying the strife. Some also blamed him for ordering the massacre.

Although the accusations hurt him terribly, he continued to work out a solution, visiting Colorado to meet the miners and their families and listen to their grievances. He also inspected their living and working conditions and attended social events. The visit went a long way to resolve the conflict.

In addition, he started working out a plan that allowed workers representation in company affairs, communicating his ideas through speeches and articles. His actions not only restored the family’s reputation, the plan he envisaged also became a model for industrial relations.

In 1922, he provided funds for the creation of a management consulting section in the law firm of Curtis, Fosdick, and Belknap, turning it into a separate non-profit organization called Industrial Relations Counselors in 1926.  His aim was to establish industrial relations as a recognized academic discipline.

In 1921, John D. Rockefeller Jr. received about 10% of the shares of the Equitable Trust Company from his father, making him the largest shareholder of the bank. He continued to hold the largest share even after it merged with Chase National Bank in 1930.

Sometime in later 1920s, he established Dunbar National Bank. Located in Harlem, it was unique in that it employed only African-Americans as tellers, clerks and bookkeepers as well as in key management positions.

Rockefeller Center, constructed between 1931 and 1939, was another of his great achievement. Covering an area of 89,000 square meters between 48th Street and 51st Street in Midtown Manhattan, the complex not only turned out to be a New York City landmark, but also created thousands of jobs during the Great Depression.

In 1941, he helped to establish the United Service Organizations to help the members of the U.S. military and their dependents. Again in 1943, he helped to raise more than $321 million for the National War Fund, concurrently serving on its board.

In December 1946, he bought a piece of land along the East River in Manhattan for $8.5 million, simply to donate it for constructing a permanent home for the United Nations. Thereafter, he started taking a back seat, leaving most of the works on his children.

Abby Rockefeller died of a heart attack in April 1948. In 1951, John D. Rockefeller Jr married Martha Baird, the widow of his old college Arthur Allen. She was a pianist, philanthropist and longtime advocate for the arts.

On May 11, 1960, John D. Rockefeller Jr. died of pneumonia in Tucson, Arizona, and was interred in the family cemetery in Tarrytown.  At that time, he was 86 years old.

The John D. Rockefeller Jr. Library at Brown University is named in his honor.

See the events in life of John D. Rockefeller Jr. in Chronological Order 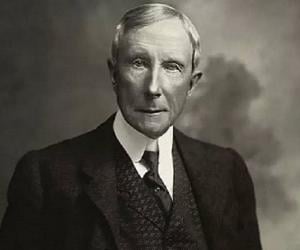