(American Businessman and Founder of the 'Standard Oil Company')

Advanced Search
John Davison Rockefeller Sr. was a renowned American industrialist and philanthropist. Born into a modest family, he worked his way up to become one of the wealthiest persons in modern history. He began his career as an assistant bookkeeper at the age of 16. By the age of 20, he had ventured into his own business with partner Maurice B. Clark. Recognizing the potential of commercial oil business, John and Maurice invested in a refinery at Cleveland, Ohio in 1863. In 1870, he established the ‘Standard Oil Company,’ which within a decade almost monopolized and controlled 90% of the U.S. refineries and pipelines. The demand for kerosene and gasoline constantly increased among the masses and he became the richest person in the country. He had his fair share of criticism as well. He was accused of engaging in unethical business practices, such as acquiring pipelines and forest areas to prevent his competitors from exceling. In 1911, the U.S. Supreme Court found ‘Standard Oil’ in violation of the ‘Sherman Antitrust Act’ and ordered its dissolution. After his retirement, he became an active philanthropist and donated generously to the church, educational institutions, public health causes, and medical researches. During his lifetime, he donated more than $500 million to various charitable causes. Warren Buffett
DID WE MISS SOMEONE?
CLICK HERE AND TELL US
WE'LL MAKE SURE
THEY'RE HERE A.S.A.P
Quick Facts

Cause of Death: Arteriosclerosis

American Celebrities
Philanthropists
American Men
Cancer Entrepreneurs
American Oil Barons
Childhood & Early Life
John D. Rockefeller was born on 8 July 1839, in Richford, New York, USA, to William Avery Rockefeller and Eliza Davison. His father was of English and German descent, while his mother was of Scots-Irish ancestry. He was the second of six children and the eldest son in the family.
His father was a traveling salesman who seldom visited his family. He was infamous for his dubious activities and loose morality. His mother, on the other hand, was a pious housewife who struggled to preserve normalcy at home. As a child, John helped his mother with regular household chores and did odd jobs to earn extra money.
In 1851, the family moved to Owego where he attended the ‘Owego Academy.’ In 1853, the family moved to Strongsville where he attended ‘Cleveland's Central High School.’
He then pursued a short business course in book keeping at ‘Folsom's Commercial College.’ Despite the difficulties at home, he was an obedient, sombre, and studious boy. 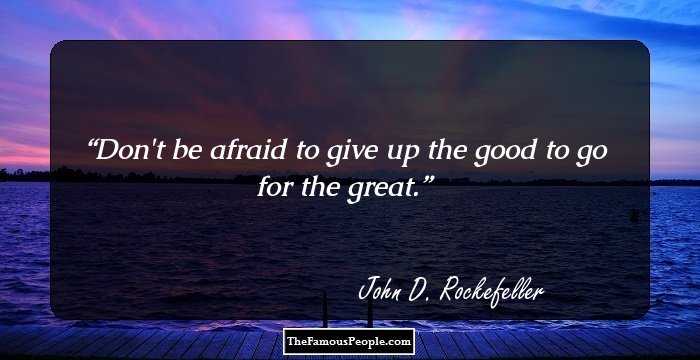 Continue Reading Below
Career
At the age of 16 in September 1855, John D. Rockefeller landed his first job as an assistant bookkeeper with ‘Hewitt & Tuttle,’ commission merchants and produce shippers. He impressed his employers with his skill at calculating transportation costs.
In 1859, at the age of 20, he ventured into private business with his partner Maurice B. Clark, and together they raised $4,000 in capital. The business flourished steadily and by the end of the first year, it had grossed $450,000.
A gifted entrepreneur, he soon sensed a lucrative business opportunity in commercial oil. In 1863, the partners invested in an oil refinery near Cleveland, Ohio, directly owned by ‘Andrews, Clark & Company’ (composed of Clark, Rockefeller, chemist Samuel Andrews, and Clark's two brothers). Within two years, it became the largest refinery in the area.
In February 1865, he bought out the Clark brothers at an auction for $72,500 and established the firm ‘Rockefeller & Andrews.’ He adapted swiftly to capitalize on the rapidly growing industry.
In 1866, his brother William Rockefeller Jr. built another refinery in Cleveland, making him a partner. In 1867, Henry M. Flagler joined as a partner, and the firm ‘Rockefeller, Andrews & Flagler’ was established.
By 1868, the company owned two Cleveland refineries and a marketing subsidiary in New York. It became the largest oil refinery in the world and laid the foundation for ‘Standard Oil Company.’
In January 1870, John Rockefeller dissolved the partnership of ‘Rockefeller, Andrews & Flagler,’ and formed the ‘Standard Oil of Ohio.’ Soon it became the largest shipper of oil and kerosene in the country.
He continued buying rival refiners; by 1872, ‘Standard Oil’ had taken over 22 of its 26 Cleveland opponents. Charles Pratt and Henry H. Rogers, owners of a major New York refinery, Pratt and Company became his partners. Rogers became one of the key members in the formation of the ‘Standard Oil Trust’ and Pratt's son, Charles Millard Pratt, became its Secretary.
Gradually, ‘Standard Oil’ developed over 300 oil-based products to increase its market penetration. By the end of the decade, the company had attained a near monopoly of the oil business in the U.S. and Rockefeller had become a millionaire.
Continue Reading Below
Using its industrial strength, ‘Standard’ made profitable deals with the railroads to ship its oil. It acquired pipelines and terminals, establishing a transport system for its own goods. In addition, it also purchased thousands of acres of forest to prevent rivals from operating their own pipelines. Rockefeller was accused of monopolizing the oil trade.
In 1882, the ‘Standard Oil Trust’ was established to consolidate the various holdings of the company. Rockefeller and eight other trustees controlled the 41 companies in the trust whose assets included 20,000 domestic wells, 4,000 miles of pipeline, 5,000 tank cars, and over 100,000 employees.
Over time, ‘Standard Oil’ adapted to the changing market demands. It ventured into European market, expanded into natural gas production in the U.S., and supplied gasoline for automobiles.
Eventually, the public and the U.S. Congress got wary of Standard Oil’s monopolistic business practices. ‘The Sherman Antitrust Act of 1890’ and the verdict of Ohio Supreme Court in 1892 resulted in the dissolution of the trust. Nevertheless, the overall hierarchy of ‘Standard’ remained in place.
Rockefeller later ventured into iron ore and ore transportation, resulting in a clash with steel tycoon Andrew Carnegie. He also acquired leases for crude oil production in Ohio, Indiana, and West Virginia. In 1895, at the age of 56, he took retirement from the daily operations of the business.
In 1909, New Jersey allowed the trust to be re-created in the form of a single holding company. Rockefeller retained his nominal title as president and kept his stock. In 1911, the Supreme Court of the U.S. found the company in violation of the ‘Sherman Antitrust Act.’
As a result, the ‘Standard Oil Company’ was broken up into 34 new companies. Rockefeller held over 25% of its stock at the time of its breakup. All the stockholders received fair shares in each of the 34 companies. Over the next decade, the companies' combined net worth increased manifold and Rockefeller’s personal wealth reached $900 million. 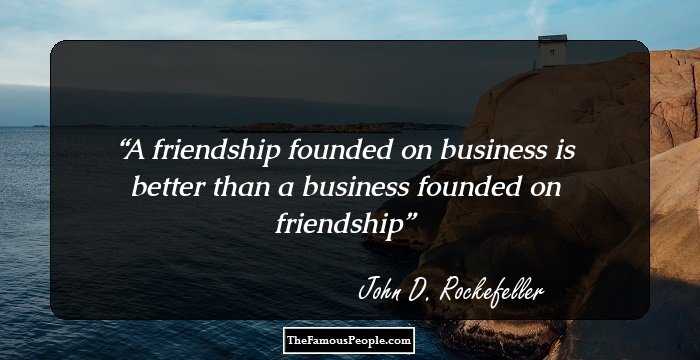 Quotes: Business
Major Works
John D. Rockefeller was one of the wealthiest industrialists of the U.S. He founded the ‘Standard Oil Company,’ which almost monopolized the oil industry in the U.S. and made him a billionaire. The company was one of the world's first and largest multinational corporations. He also established numerous philanthropic charities through which he donated several hundred million dollars.
Philanthropic Works
John D. Rockefeller was also a renowned philanthropist. Most of his charity went to the church. He also donated to educational institutions, public health causes, medical science researches, etc.
He donated $80 million to the ‘University of Chicago,’ converting it into a top-notch institution. He also founded the ‘Rockefeller Institute for Medical Research’ and established the ‘Rockefeller Foundation.’ In his lifetime, he donated over $500 million. 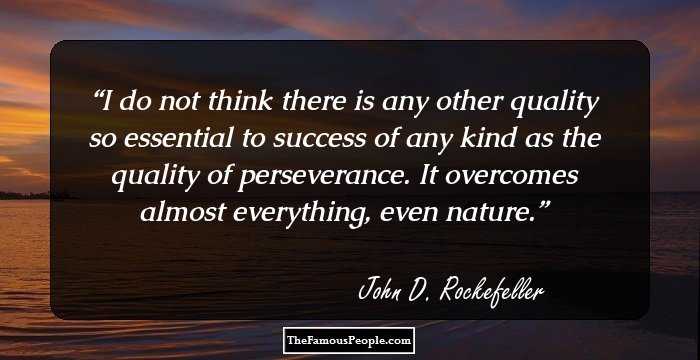 Quotes: Think, Nature, I
Personal Life & Legacy
When he was a young boy, Rockefeller enjoyed music and even considered making a career out of it. He also exhibited excellent skills with numbers and detailed accounting.
In 1864, he married Laura Celestia Spelman (1839–1915), daughter of Harvey Buell Spelman and Lucy Henry. They had four daughters and a son.
He was a devoted Baptist; he would read the Bible regularly and attend prayer meetings twice a week.
He died on 23 May 1937 of arteriosclerosis at his home in Ormond Beach, Florida. His body was buried at ‘Lake View Cemetery’ in Cleveland.
Trivia
As a youth, his ambition was to earn $100K and live 100 years.

See the events in life of John D. Rockefeller in Chronological Order