Folk singer Joan Baez, one of the most sought after artists of the 1960’s decade is a highly talented multi-faceted woman. Though generally regarded a folk singer, she had branched into several other musical genres like folk rock, pop, country and gospel music. She is someone who is deeply involved in social activism and often her songs deal with socio-economic and political issues. Known for her strong vibrato voice, she entered the music scenario during the 1950’s and rose to fame with her performance at the Newport Folk Festival. She met with immediate success as she began her recording career; her first three albums went Gold in the U.S. The talented singer has recorded songs not just in English, but also in Spanish and several other languages. She loved music from a young age and was deeply influenced by the folk musician Pete Seeger. Initially her works consisted of traditional material like folk ballads, child ballads and blues, and she is credited to have revived the interest in folk music in the 1960’s. She was also one of the first artists to use her popularity for social causes. A much loved singer, she made sure that she used her fame to promote social changes in the mindset of people through her songs and lyrics. Founder/Co-Founder: Institute for the Study of Nonviolence

American People
Folk Singers
Lyricists & Songwriters
Folk Rock Singers
American Women
Childhood & Early Life
Joan Baez, born Joan Chandos Baez, is the daughter of Albert Baez and Joan Sr. The family followed Quakerism. She had two sisters one of whom was also a musician.
Her father worked with UNESCO and as a result the family moved many times to various countries all over the world including England, France, Canada, Spain and Iraq.
She took to music after listening to a performance by folk musician Pete Seeger. Soon she began performing publicly.
Her family moved to Massachusetts in 1958 which was fast developing as the center of the folk music scene.
She went to Boston University for six weeks and performed at clubs. 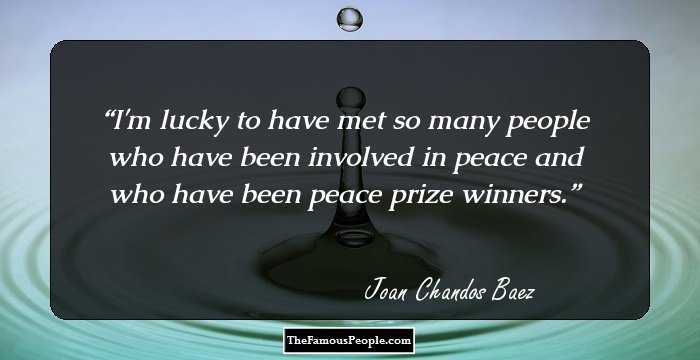 The Hottest Male Celebrities With The Best Abs
Career
She gave her first concert at the Club 47 in Cambridge in 1958 for $10. She was asked to perform for the club regularly for $25 per show.
She became acquainted with Bob Gibson and Odetta, two very prominent folk singers of those days. Impressed by her music, Gibson invited her to perform with him at the Newport Folk Festival in 1959. The duo sang two duets and the young lady immediately got noticed for her angelic voice.
She signed a contract with Vanguard and released her debut album, the self-titled ‘Joan Baez’ in 1960. It featured a collection of traditional ballads, laments and blues. It received positive reviews and became a moderate hit.
Her second album, ‘Joan Baez, Vol. 2’ was out in 1961. It comprised traditional material and went Gold like its predecessor.
In her live album ‘Joan Baez in Concert, Part 2’ (1963), she featured the singer Bob Dylan for the first time, and played a significant role in promoting the career of the hitherto unknown singer.
During the March on Washington for Jobs and Freedom in 1963, she performed the civil-rights anthem ‘We Shall Overcome’ which was written by Pete Seeger and Guy Carawan. She sang the anthem again on various other occasions.
Her initial albums contained traditional music but by the mid 1960’s she decided to broaden her repertoire and collaborated with the classical music composer Peter Schickele who provided orchestration for her albums ‘Noel’ (1966), ‘Joan’ (1967) and ‘Baptism: A Journey Through Our Time’ (1968).
By now she began singing poems by celebrated poets and featured her own interpretation of the works of contemporary composers like Paul McCartney and Tim Hardin.
Her 1969 album, ‘David’s Album’ was recorded in support for her then-husband David Harris who was about to be imprisoned for draft resistance. It featured more complex country-rock music.
Continue Reading Below
Inspired by Martin Luther King, Jr., she participated in several Civil Rights Movement demonstrations, and anti-war marches during the 1960-70’s. She strongly opposed the Vietnam War.
In 1971 she released the album ‘Blessed Are…’ which was her last one with Vanguard Records. She had composed a majority of the songs in this album herself.
She composed and performed ‘The Story of Bangladesh’ at the Concert for Bangladesh in 1971. The song was later renamed ‘The Song of Bangladesh’ and included in one of her later albums.
She signed a contract with A&M in 1972 and released her first album with them which was titled ‘Come From the Shadows’. A&M attempted to divert her to a more commercial direction.
Her 1974 album ‘Gracias a la Vida’ mainly contained Spanish songs. It was released as a message of hope to Chileans who were suffering under Augusto Pinochet after the death of Salvador Allende.
She switched to CBS Records in 1977 and brought out the album, ‘Blowin’ Away’. The album had a mainstream pop sound unlike her earlier albums. She composed the song ‘Alter Boy and the Thief’ specially for her gay fan base.
She played a major role in the founding of the US section of Amnesty International in the 1970’s. Her deep interest in human rights also led her to form her own group ‘Humanitas International’.
She passionately supported the fight for gay and lesbian rights and performed at various concerts to oppose the Briggs Initiative that aimed at banning gay people from holding teaching positions in public schools in California.
She became more involved with socio-political causes after the 1970’s and released albums only sporadically. Some of the albums she released during the 1980-90’s are ‘Recently’ (1987), ‘Play Me Backwards’ (1992), and ‘Gone from Danger’ (1997).
Continue Reading Below
Her more recent albums include ‘Dark Chords on a Big Guitar’ (2003) and ‘Day After Tomorrow’ (2008). 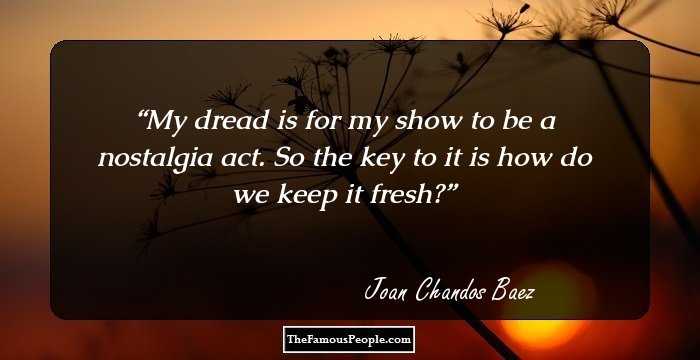 Major Works
She is a folk singer who revived the musical genre of folk music during the 1960’s. Her lyrics are often based on social issues and topics of political significance, and she has given many concert performances to promote human rights causes in a career spanning over five decades.
She uses her popularity to garner support for the causes she believes in. She is a prominent activist who campaigns for a range of issues like gay rights, human rights, environmentalism, etc.
Awards & Achievements
She received the Grammy Lifetime Achievement Award in 2007 for making creative contributions of outstanding artistic significance to the field of recording during her lifetime.
The Amnesty International inaugurated the Joan Baez Award for Outstanding Inspirational Service in the Global Fight for Human Rights in 2011 and presented her the first award in recognition of her human rights work. 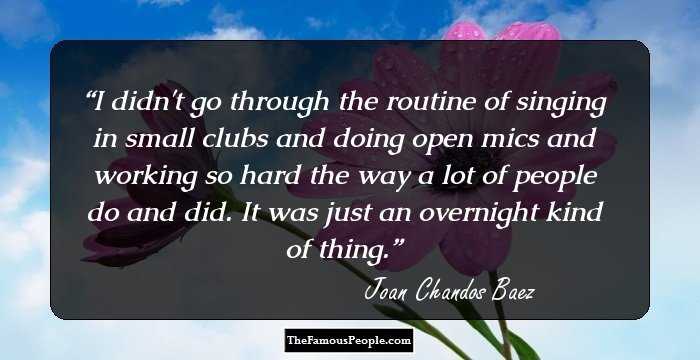 Quotes: Singing
Personal Life & Legacy
She once dated singer Bob Dylan during the early years of their careers.
She was married to David Harris, a journalist and anti-war activist from 1968 to 1973 before divorcing amicably. She has one son, Gabriel who is a drummer.
Trivia
Her father was the co-inventor of the X-ray microscope.
She had once considered changing her stage name to Rachel Sandperl.

Grammy Awards
Recommended Lists:
Musicians #436
Singers #505
Activists #7
You May Like