(Known for Her Hit Singles 'Fast Car', 'Talkin' 'bout a Revolution' and 'Baby Can I Hold You')

Advanced Search
Tracy Chapman is an American singer-songwriter and well-renowned folk-rock singer. She is a four-time ‘Grammy Award’ winner and multi-platinum artist. Born in Ohio, Tracy was raised by a middle class family in Connecticut. Her mother supported her musical endeavors and by the time Tracy was in ‘Tufts University,’ where she studied anthropology and African studies, she had started making music, writing songs, and performing at the local coffeehouses. Through a friend in her university, she met the producers of ‘Elektra Records’ and her first album ‘Tracy Chapman’ was released in 1988. The album was an instant hit and the hit single ‘Fast Car’ made her an overnight sensation. She has recorded a total of eight studio albums, including ‘New Beginning,’ and ‘Our Bright Future.’ Most of her albums are certified platinum. She does a substantial amount of work for various charities all over the world and has been a part of many benefit and charitable concerts. She is a human rights activist and claims that she leverages her status to help the needy and bring to people’s attention some of the important humanitarian issues. Her writings and songs depict her humble nature. Eminem
30th March In History
DID WE MISS SOMEONE?
CLICK HERE AND TELL US
WE'LL MAKE SURE
THEY'RE HERE A.S.A.P
Quick Facts

American People
Folk Singers
Black Musicians
Lyricists & Songwriters
Black Lyricists & Songwriters
Childhood & Early Life
Tracy Chapman was born on March 30, 1964, in Cleveland, Ohio, USA. She moved to Connecticut at a very young age and was brought up by a middle class family. She was inclined towards music from a young age and her mother recognized her talent.
She was gifted a ukulele by her mother when she was only three years old. By the age of eight, she had started writing songs and playing the guitar. After finishing her high school, she went to study at the ‘Tufts University’ on a minority placement scholarship.
She studied anthropology and African studies at ‘Tufts.’ During this period, she got captivated with folk-rock singers. She took up singing as a hobby and started performing at coffeehouses. This eventually led to her recording songs at her college radio station. 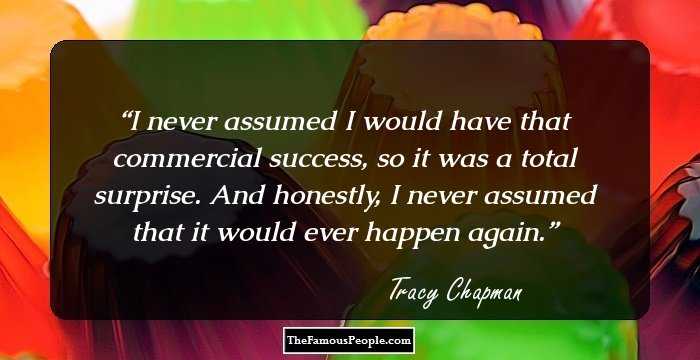 Continue Reading Below
Career
In 1986, Tracy met Elektra Records’ manager Elliot Roberts, which helped her to start her musical career. She recorded ‘For My Lover’ for a Boston-based folk magazine called ‘Fast Folk Musical Magazine.’ The magazine was usually sold with a record.
In 1988, she released her debut album ‘Tracy Chapman.’ Produced by ‘Elektra Records,’ the album housed the hit single ‘Fast Car.’ She toured the US after the release of her album. The same year, she also performed at the ‘Nelson Mandela’s 70th Birthday Tribute Concert’ in ‘Wembley Stadium,’ England.
In 1989, her follow-up album ‘Crossroads’ was released. The album was co-produced by Tracy and Kershenbaum from ‘Elektra Records.’ In the same year, her new album was certified platinum and peaked at number nine at the ‘US Billboard 200.’
In 1990, she performed at the ‘Nelson Mandela: An International Tribute For A Free South Africa Concert’ in ‘Wembley Stadium,’ England. She also participated in a rally for Nelson Mandela at the ‘Yankee Stadium,’ New York and sang ‘Born To Fight’ from ‘Crossroads.’
In 1991, she inducted a musical group known as ‘The Impressions’ into the ‘Rock and Roll Hall of Fame’ in ‘Waldorf Astoria Hotel,’ New York. In the same year, she performed at the ‘Guthrie Theatre,’ Minneapolis, Minnesota.
In 1992, she released her third album ‘Matters Of The Heart.’ She once again went on a US tour after the release of her album and performed at the ‘Greek Theater,’ Los Angeles, California. The album was ranked 53 at the ‘US Billboard.’
In 1993, her CD from the ‘Bob Dylan 30th Anniversary Celebration Concert,’ which had taken place in Madison Square Garden, New York, was released.
In 1995, Tracy’s ‘New Beginning’ was released. Subsequently, she appeared on the ‘Late Show with David Letterman’ on ‘CBS’ as part of the album’s promotion. The album sold five million copies in the US alone.
In 1996, the third leg of New Beginning’s US tour started in Minneapolis. The same year, ‘New Beginning’ became multi-platinum and the single ‘Give Me One Reason’ peaked at number three on ‘The Billboard Hot 100.’
Continue Reading Below
In 1997, Tracy won her fourth ‘Grammy’ for ‘Record of the Year’ for the song ‘Give Me One Reason.’ This was the year when she also won four ‘Bammies’ at the 20th ‘Annual Bay Area Music Awards,’ San Francisco. She also recorded a song for B.B. King’s ‘Deuces Wild.’
In 1999, she participated at the ‘Tibetan Freedom Concert’ which took place in places like Chicago, Amsterdam, Tokyo, and Sydney. In the same year, she performed ‘One Love’ with other popular singers at the ‘One Love Bob Marley All Star Tribute’ in Jamaica.
In 2000, her album ‘Telling Stories’ was released. The same year, the album was certified gold. To promote the album, Tracy performed in shows, such as ‘Late Show with David Letterman,’ ‘The Rosie O’Donnell Show,’ and ‘Good Morning America.’ She also went on a US tour that ended in Boston.
In 2001, Tracy won the ‘Outstanding Female Vocalist’ at the ‘California Music Awards.’ The same year, a collection of her songs from over the years was released in Europe and Asia. Towards the end of the year, she performed at ‘XV Bridge Benefit Concert’ in California.
In 2002, Tracy released her sixth studio album, ‘Let It Rain.’ The single ‘You’re The One’ became an instant hit. She went on to perform the single at ‘The Tonight Show with Jay Leno,’ ‘Last Call with Carson Daly,’ and ‘Good Morning America.’
Tracy’s seventh studio album ‘Where You Live’ released in 2005. She went on a US tour for its promotion. She also traveled across Europe and held summer concerts in Germany, Italy, France, Sweden, Finland, Norway, England, Russia, etc.
In 2008, Tracy’s eighth studio album ‘Our Bright Future’ released. She went on a European tour for the album’s promotion. The tour started in Brussels, Belgium and ended in Barcelona, Spain.
In 2014, she became a member of the ‘Sundance Film Festival U.S. Documentary Jury.’ The following year, she performed ‘Stand By Me’ by Ben E. Kings in one of the episodes of ‘Late Show with David Letterman.’
On November 2015, she released her first global compilation called ‘Greatest Hits’ which consisted of 18 tracks. 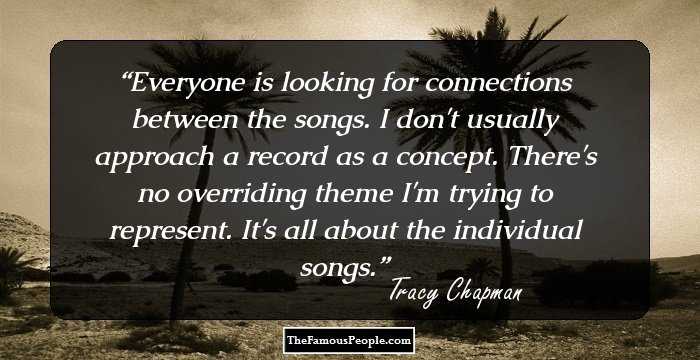 Quotes: Trying
Awards & Achievements
Tracy was honored with three ‘Grammy Awards’ at the beginning of her career. Her first studio album ‘Tracy Chapman,’ which released in 1988, won three ‘Grammys’ for ‘Best New Artist,’ ‘Best Female Pop Vocal Performer,’ and ‘Best Contemporary Folk Album.’
She received her fourth ‘Grammy Award’ in 1997 for her album ‘New Beginning.’ She won the award for the song ‘Give Me One Reason’ under the ‘Best Rock Song’ category. She also received many other ‘Grammy’ nominations for the same album.
Personal Life & Legacy
There has always been a speculation on Tracy’s sexual orientation as she has never revealed her sexual preference. She often says that her personal life has nothing to do with the professional work that she does. She dated writer Alice Walker in the 1990s.
Tracy is a well-known political and social activist. She often leverages her status to discuss important humanitarian issues. She is a self-confessed feminist. 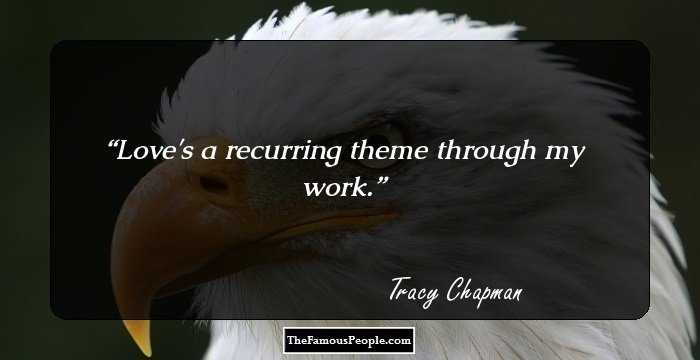 Trivia
Tracy once took part in the ‘A Spelling Bee for Cheaters’ competition in San Francisco.

Quotes By Tracy Chapman | Quote Of The Day | Top 100 Quotes

See the events in life of Tracy Chapman in Chronological Order