Jim Stynes is a footballer who went on to be known as the pride of Australian football over the years. In a career spanning 264 games, Stynes had contributed greatly towards the success of his team, Melbourne. This player tried football first at the age of eight and turned out to be impressive even at a young age. He then earned a scholarship to play football as well as pursue his education at Melbourne, which changed his life completely. He soon earned a spot in the ‘Melbourne Football Club’ when he was still a teenager. Jim’s passion towards the game became really evident, when he continued playing for Melbourne in spite of being injured. Jim was also a recipient of several honours, which he fetched for proving his football prowess time and again. A couple of these include the ‘Brownlow Medal’ as well as the ‘Medal of the Order of Australia’. Apart from merely sticking to his sports responsibilities, Jim also turned towards philanthropy at a later stage of his career, by co-founding the initiative, ‘The Reach Foundation’. He also explored his writing abilities much later, by penning two books based on his life, as well as a work for children. 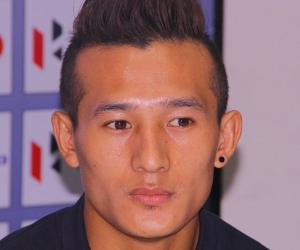 Adebayo Akinfenwa
Football Players #2241
Sportspersons #9381
DID WE MISS SOMEONE?
CLICK HERE AND TELL US
WE'LL MAKE SURE
THEY'RE HERE A.S.A.P
Quick Facts

Cause of Death: Metastatic Melanoma

Irish Celebrities
RMIT University
Tall Celebrities
Tall Male Celebrities
Male Sportspersons
Childhood & Early Life
Stynes was born to Teresa and Brian on the 23rd of April, 1966 in Dublin, Ireland. He was raised in the Rathfarnham suburb of Ireland, where he attended the ‘Ballyroan Boys School’. He then moved to the ‘De La Stelle College Churchtown’, where he continued his further studies.
His first tryst with football was at the tender age of eight. He even went on to represent the ‘Ballyboden St. Enda’s Gaelic Athletic Association’, at the under-11 level, later that year.
He was further inspired by a 1980 movie titled ‘The Club’, which was based on Football. Watching this flick gave him the much needed exposure in understanding how the game is played at a professional level.
In 1984, Jim got an opportunity to play for his hometown, Dublin, in the ‘All-Ireland Minor Football Championship’. His team even emerged victorious in this contest.
Stynes’ destiny changed when he came across an advertisement of the ‘Melbourne Football Club’. Luckily for him, the youngster grabbed this opportunity and landed in Australia in the year 1984.
Later in his life he started pursuing his degree in ‘Bachelor of Social Science’ from the reputed ‘RMIT University’. After graduating, he got admitted to ‘Deakin University’, from where he earned a ‘Bachelor of Education’ degree.
Continue Reading Below
You May Like

The Hottest Male Celebrities With The Best Abs
Career
Jim got a big career break when he represented ‘Melbourne Football Club’ in a match against ‘Geelong Football Club’ in 1987. However, he was criticized for faring poorly in all these games.
This footballer silenced his critics through his striking performance in the ‘1988 VFL Grand Final’. The latter was then announced as the ‘Best Player of the match’, despite his team’s dismal show.
Stynes suffered a major injury in 1993 during a contest against ‘North Melbourne Football Club’. However, he convinced his coach to allow him to continue playing and even performed by braving the injury.
Even the next year, he continued playing despite not being completely physically fit.
This Australian footballer reached the peak of his career during the period 1995-98,
He was appointed the chairman of the ‘Melbourne Football Club’ in 2008, after succeeding Paul Gardener.
After serving in this role for four years, Jim resigned in 2012 owing to family and other personal commitments.
Awards and Achievements
Jim was felicitated with the ‘Australian Sports Medal’ in 2000 for his contribution to football. He also won a place in the ‘Team of the Century’, announced by the ‘Melbourne Football Club’, at around the same time.
Stynes received the ‘Doctor of the University’ honour from the ‘Australian Catholic University’.
Continue Reading Below
This footballer won the ‘Brownlow Medal’ in 1991 for being one of the most consistent players of that year. He was also a recipient of the ‘AFL Players Association MVP Award’, an honour which he received at the same time.
Jim’s football prowess won him a place in the ‘Australian Football Hall of Fame’ in 2003.
Stynes was honoured with the ‘Medal of the Order of Australia’ in 2007 for mentoring youngsters and contributing greatly towards the sport.
Personal Life & Legacy
Jim tied the knot with a woman named Samantha, with whom he has two kids, namely Tiernan and Matisse.
This footballer has two siblings named Brian and David, both of them followed Jim’s footsteps and played the sport at a professional level.
Even while he was busy playing football, Jim founded the non-profit organization ‘The Reach Foundation’ along with a movie director named Paul Currie, in 1994. The initiative was aimed at encourage the talent and hidden-abilities in youngsters so that they experience a better life.
Jim had also authored several books during his lifetime. The first one amongst these was the autobiographical work titled ‘Whatever it Takes’, in 1996.
He co-wrote two books during the period 2003-06, namely ‘Heroes’ as well as ‘Finding Heroes’.
The footballer later penned another book based on his life titled ‘My Journey’, in the year 2012.
Jim became a victim of Cancer while he was serving as the chairman of the ‘Melbourne Football Club’. He succumbed to the disease in 2012 at his residence, Jim was 45-years-old at the time of his death. The last respects were paid to this footballer through a state funeral.
You May Like

See the events in life of Jim Stynes in Chronological Order