Steven Gerrard is a former English professional footballer who played for Liverpool FC and the England national team as a central midfielder. Following his retirement from professional football, he started his career as an academy coach at Liverpool. He spent most of his 18-year-long career playing for Liverpool, and has been the captain of his club team for over a decade. By the time he left Liverpool to play for LA Galaxy, he became the third player ever to achieve 500 or more Premier League appearances for one club. He has also served as the captain of the England national team for some time. He has played 114 matches for England, the fourth most after Peter Shilton, Wayne Rooney and David Beckham. One of the best midfielders of his time, he has scored a total of 125 goals during his senior club career and 21 goals for his national team. Outside football, he has documented his personal and professional journey in two ghost-written autobiographies, 'Gerrard: My Autobiography' and 'My Story'. He has also made an appearance in the British sports drama film 'Will'. Raheem Sterling
Football Players #73
Sportspersons #490
DID WE MISS SOMEONE?
CLICK HERE AND TELL US
WE'LL MAKE SURE
THEY'RE HERE A.S.A.P
Quick Facts

British People
British Men
Tall Celebrities
Tall Male Celebrities
Male Sportspersons
Childhood & Early Life
Steven George Gerrard was born on May 30, 1980 in Whiston, Merseyside. He has an older brother named Paul. His cousin Anthony Gerrard is also a professional footballer who plays as a defender for Oldham Athletic.
At the age of nine, he was noticed by Liverpool scouts while playing for his hometown team Whiston Juniors, following which he joined the Liverpool Academy. At 14, he had trials with a number of clubs including Manchester United, but never qualified for the England schoolboys' team. 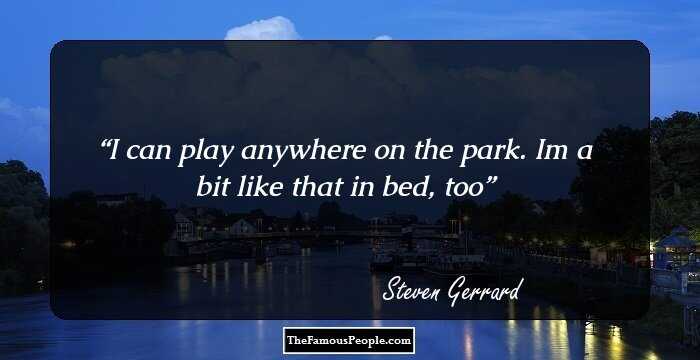 Famous Beautiful Women With Green Eyes
Club Career
At the age of 17, Steven Gerrard signed his first professional contract with Liverpool on November 5, 1997. One year later, he made his professional debut as a last-minute substitute for Vegard Heggem in a match against Blackburn Rovers on November 29, 1998, during the Premier League.
During the 1999-2000 season, he scored his first goal in a match against Sheffield Wednesday, which his team won by 4-1 margin. However, a growth spurt made him suffer from back problems repeatedly, while he also went through multiple operations for groin injuries.
Following his recovery, he went on to make fifty starts during the 2000-2001 season, scoring ten goals, as his team won the FA Cup, Football League Cup, and the UEFA Cup. He earned the 'PFA Young Player of the Year' title and continued his good form in the next season, winning the FA Charity Shield and UEFA Super Cup.
Gerrard, who acted as the vice-captain in the previous years, was named the Liverpool captain in October 2003, following which he signed a new four-year deal with the team. After a rough season during 2003-04, he considered moving to Chelsea, but eventually declined a £20 million offer and stayed with Liverpool.
Starting the 2004–05 season with injuries, he returned to field scoring decisive goals for his team, even though his same-side goal during the 2005 League Cup final resulted in a loss for the team. However, he helped his team come back from a three-goal deficit to tie the 2005 Champions League final against A.C. Milan, a match they won by 3-2 in the penalty shootout. He was later named the 'UEFA Club Footballer of the Year'.
In the next season, he led the team to the 2006 FA Cup Final against West Ham United, and scored two goals to win the match. That year, he became the first Liverpool player to be voted the 'PFA Player of the Year' after John Barnes in 1988.
He helped his team win the Football League Cup Final after six years, against Cardiff City on 26 February 2012. On his 400th Premier League match on March 13, 2012, he scored a hat-trick against Everton.
During the 2011-12 season, he had declined an opportunity to join Bayern Munich stating that he would like to see Liverpool win couple more trophies. He finally decided to leave Liverpool at the end of 2014-15 season as the club delayed to renew his contract and he was not included in the starting lineup against Real Madrid during Champions League.
In January 2015, he signed an 18-month Designated Player contract with LA Galaxy from the Major League Soccer division in the US. He debuted for his new team on July 11 in a friendly match against Club América, and later that month made it to the 22 shortlisted players for the 2015 MLS All-Star Game roster.
Continue Reading Below
In late 2015, he announced that he was considering retirement in 2016, and eventually retired from professional football on November 24, after his contract with the club ended. His final game for LA Galaxy was on November 6, 2016 in a MLS Cup match. 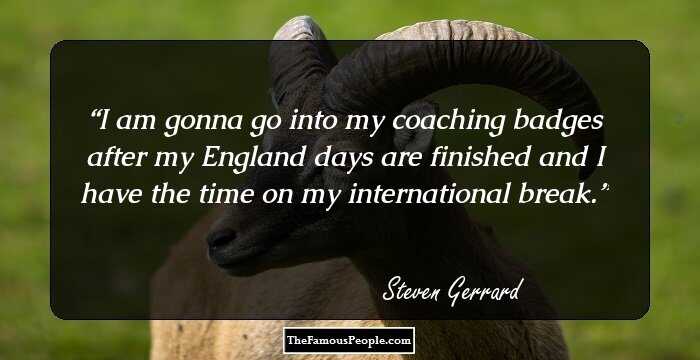 International Career
Steven Gerrard started his international career on May 31, 2000, in a match against Ukraine. Later that year, he was included in the Euro 2000 team; however, he played in one match only, that too as a substitute, against Germany.
In September 2001, in another game against Germany during the 2002 World Cup qualifier, he scored his first international goal. While England won the match 5-1, he stayed out of the team in the following matches for his groin injury.
He was part of the starting eleven during Euro 2004, but his team was eliminated after losing their quarter-final match against Portugal. During his first World Cup in 2006, he became the top scorer for England with two goals after his team lost to Portugal again in the quarter-finals.
During Euro 2008 qualifier, he temporarily served as England captain, but was later replaced by John Terry after the team failed to qualify for the tournament. He was named the captain of the England team again during Euro 2012, and led his team to Euro quarterfinals. He also became the only England player to make it into the UEFA Team of the Tournament.
He led England to the 2014 FIFA World Cup, in which the team was eliminated from group stage for the first time since 1958. He was removed from captaincy in their last group match, and subsequently announced his retirement from international football on July 21, 2014.
Awards & Achievements
During his career, Steven Gerrard helped his Liverpool team win two FA Cups, three League Cups, one UEFA Champions League, one UEFA Cup, and one UEFA Super Cup.
In 2005, Steven Gerrard received the 'Ballon d'Or Bronze Award' and was named the 'UEFA Club Footballer of the Year'. In 2007, he became a Member of the Order of the British Empire, an honor bestowed upon him by Queen Elizabeth II. He was among the 18 players selected for the 'UEFA Ultimate Team of the Year' in 2015. 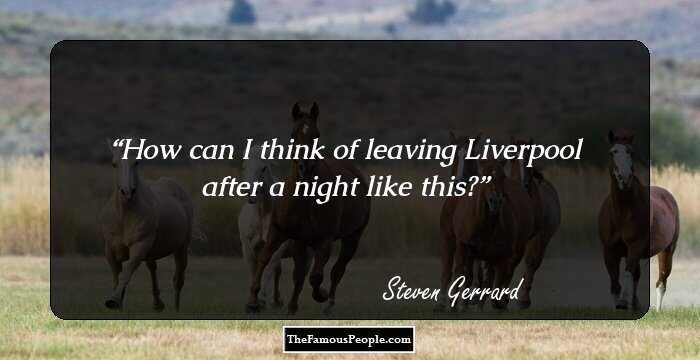 Personal Life & Legacy
Steven Gerrard got married to Alex Curran, his childhood sweetheart, in a Catholic ceremony in Wymondham on June 16, 2007. They have four children: three daughters – Lilly-Ella, Lexie and Lourdes – and one son, Lio.
Trivia
One of Steven Gerrard's cousins, 10-year-old Jon-Paul Gilhooley, was the youngest victim of the 1989 Hillsborough disaster. He honored him in his autobiography with the finishing line "I play for Jon-Paul".

Quotes By Steven Gerrard | Quote Of The Day | Top 100 Quotes

See the events in life of Steven Gerrard in Chronological Order