Jerome was a Christian priest, theologian, confessor and historian who is best known for translating most of the Bible into Latin from original Hebrew sources. His version later became known as the Latin Vulgate Bible (derived from the Latin word for 'common'). He is the second most voluminous writer, after Augustine of Hippo, among ancient Latin Christian scholars. His extensive body of work includes commentaries on Scripture, Ecclesiastes, and prophets; biographical and historical writings; letters; and other theological writings that are predominantly polemical in nature. He is recognized as the Doctor of the Church by the Catholic Church, the Eastern Orthodox Church, the Lutheran Church and the Anglican Communion. He is also considered the patron saint of translators, librarians and encyclopedists. After learning Hebrew from a Jew who had converted to Christianity, Jerome deviated from other Christian scholars of the time in considering the Hebrew version, and not the Septuagint, as the inspired text of the Old Testament. He is also known for his teachings on Christian moral life and was considered the spiritual leader for a group of wealthy Roman women of the time. Paul Tillich
Theologians #4
Priests #7
Historians #25
DID WE MISS SOMEONE?
CLICK HERE AND TELL US
WE'LL MAKE SURE
THEY'RE HERE A.S.A.P
Quick Facts

Palestinian People
Theologians
Life
Jerome was born as Eusebius Sophronius Hieronymus around March 27, 347, in Stridon, a village near Emona on the border of Dalmatia and Pannonia, into an Illyrian family. He traveled to Rome with his friend Bonosus to pursue rhetorical and philosophical studies where he learned Latin and at least some Greek under the grammarian Aelius Donatus.
He casually participated in the superficial escapades and sexual experimentation of students there, following which he would often visit the sepulchers of the martyrs and the Apostles in the catacombs out of guilt. Even though he was initially skeptical of Christianity, he was eventually converted and baptized between 360–366.
A few years later, Jerome went to Gaul with Bonosus and settled in Trier, where he copied Hilary of Poitiers's commentary on the Psalms and the Treatise De Synodis for his friend Tyrannius Rufinus. He and Rufinus next stayed at Aquileia for several months, during which he made many Christian friends.
Accompanied by some of his friends, Jerome set out on a journey through Thrace and Asia Minor into northern Syria in about 373. He stayed mostly at Antioch, partly because of an illness that had killed two of his friends; and following a vision, he put his secular studies aside and devoted himself to god.
He studied the Bible under Apollinaris of Laodicea and was inspired to live like an ascetic, for which he spent some time in the desert of Chalcis. During this time, he attempted to learn Hebrew from a converted Jew and was in correspondence with Jewish Christians in Antioch.
Before his return to Antioch in 378 or 379, he had copied a Hebrew Gospel and also translated some of its parts into Greek. He then spent two years studying Scripture under Gregory Nazianzen in Constantinople before serving three years as a secretary to Pope Damasus I in Rome.
He returned to Rome in 382 to attend the synod that was to end the schism of Antioch in support of Paulinus’s claim as the patriarch. He had a prominent place in the Pope's councils and was commissioned to revise the Latin versions of the Gospels, which would be eventually known as the Latin Vulgate Bible.
While in Rome, he became the spiritual leader of a group of monastic-minded wealthy and educated noble women, including widows Lea, Marcella, and Paula, as well as Paula's daughters Blaesilla and Eustochium. He became critical of the secular clergy of Rome, attracting their hostility towards him. He condemned Blaesilla's hedonistic lifestyle, which led her to adopt ascetic practices that lead to her premature death.
After Damasus’s death in December 384, Jerome was removed from his position following an inquiry into his alleged improper relationship with the widow Paula. However, his writings and letters were widely read and distributed throughout the Christian empire, and they were highly regarded by women, vowing to become consecrated virgins.
He along with his brother Paulinian and some of his friends returned to Antioch in August 385. They were soon joined by Paula and Eustochium. Along with Bishop Paulinus of Antioch, the pilgrims visited Jerusalem, Bethlehem, the holy places of Galilee, and Egypt.
He returned to Palestine in the summer of 388 and spent the rest of his life preaching to his friends and followers, in a cave near Bethlehem where Jesus was born. With Paula’s financial support, he produced most of his literary works over the next 34 years, including his translation of the Bible, his scriptural commentaries, and the dialogue against the Pelagians.
In 416, offended by Jerome’s writings against Pelagianism, partisans broke into the monastic building and set it on fire. They also killed a deacon, which forced the group to seek shelter in a nearby fortress.
Jerome died near Bethlehem on September 30, 420, following which his remains were buried at Bethlehem and were later transferred to the basilica of Santa Maria Maggiore in Rome.
You May Like

Famous Beautiful Women With Green Eyes
Literary Works
Jerome's most important achievement is the translation of the Bible, which he had begun in 382 by correcting the existing Latin language version of the New Testament. He had previously translated portions from the Septuagint, and in 390, he began translating the Hebrew Bible from the original Hebrew sources.
During the last 15 years of his life, he produced a number of commentaries on Scripture, on Ecclesiastes, on the minor and major prophets of the Old Testament, and much more. His commentaries are sometimes criticized for hasty composition, excessive dependence on his predecessors, and his preference for allegorical interpretation; however, it could be attributed to the source material available to him.
As a historian, he wrote the 'Chronicle' (Constantinople, 380), which contains valuable materials for later chroniclers; and the 'De viris illustribus' (Bethlehem, 392), which provides biographical and literary notes on 135 Christian authors. He also produced four hagiographic works; the Vita Pauli monachi, the Vitae Patrum, the Vita Malchi monachi captivi and the Vita Hilarionis.
His 117 surviving letters are also considered great examples of his literary body of work due to the vividness of their portrayal of his inner thoughts, as well as the characteristics of the contemporary society. As the spiritual leader of Roman noble women, he often wrote to them, providing guidance on certain abstentions and lifestyle practices.
He is known for the polemical nature of his writings, particularly directed against assailants of the orthodox doctrines. While in Rome in 383, he wrote the doctrine of the perpetual virginity of Mary to counter the teaching of Helvidius.
Trivia
A prominent member of the Roman clergy, Jerome is often portrayed anachronistically in the garb of a cardinal. Even in paintings, he is often depicted as a half-clad anchorite, an indication of his rank as a cardinal is often introduced in some from.
Some paintings illustrate him with a lion, which is a reference to the popular hagiographical belief that he had once tamed a lion in the wilderness by removing a thorn from its paw. However, this is usually credited to a confusion with the exploits of Saint Gerasimus due to the fact that his name in Latin is Geronimus.
Recommended Lists:
Miscellaneous #631
Intellectuals & Academics #82
You May Like

See the events in life of Jerome in Chronological Order 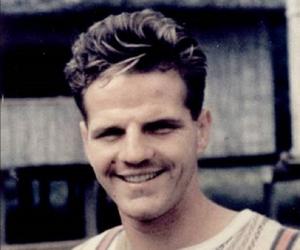