Jeffrey Jacob Abrams, better known to his fans as J.J. Abrams, is an American film and television producer, director, actor and screenwriter. He specializes in the science fiction and action genres and is most famous for his work in films like ‘Star Trek, and ‘Mission Impossible III’, and television shows like ‘Alias’ and ‘Felicity.’ He developed an early interest in film making which was only natural as his father is also a television producer. As a college student he co-wrote a film treatment with Jill Mazursky which was purchased by Touchstone Pictures and eventually made into a film titled, ‘Taking Care of Business.’ The film did not do well and it took Abrams some more years to find a firm footing in the industry. He ultimately found his big breakthrough with the television drama series ‘Felicity’ which he co-created with Matt Reeves. The show became extremely popular and earned several nominations and awards, and also established Abrams’s reputation as a screenwriter. The show’s success led him to create an action series for the television titled ‘Alias’ which ran for five seasons on ABC. The show was ranked among the "the 50 greatest TV shows of all time." He started writing, directing and producing movies along with television shows and proved his versatility and talents to the world with his ‘Mission: Impossible III.’ American People
Directors
Screenwriters
T V & Movie Producers
Film Score Composers
Childhood & Early Life
Abrams was born in New York in to television producer Gerald Abrams and his wife Carol Ann, also a television and film producer. He has one sister who is also a screenwriter. He is a Jew.
He went to Palisades High School and later attended Sarah Lawrence College. 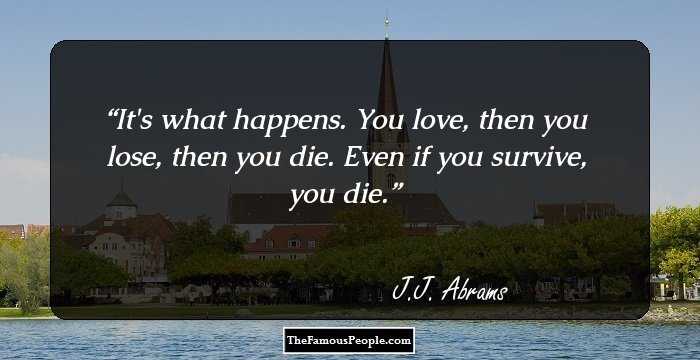 Quotes: You, Love
Continue Reading Below
You May Like

Famous Beautiful Women With Green Eyes
Career
Abrams along with Jill Mazursky co-wrote a film treatment that was eventually made into the comedy film ‘Taking Care of Business’ in 1990. The film flopped at the box office.
Undaunted by the failure, he wrote the screenplay for a drama film ‘Regarding Henry’ in 1991 which won many accolades.
In 1992, he wrote the screenplay for the science fiction-romance ‘Forever Young’ which starred Mel Gibson in the lead role. The film was well received by the audience.
He turned producer with the 1996 romantic comedy, ‘The Pallbearer’.
In 1997, he co-wrote the script for ‘Gone Fishin’ with Jill Mazursky. Both ‘The Pallbearer’ and ‘Gone Fishin’ were big box office disappointments.
He found his first big success as a screenwriter for films when he co-wrote the screenplay for ‘Armageddon’ (1998) with Jonathan Hensleigh and others. The film became an international box office hit.
He created his first television show ‘Felicity’ with Matt Reeves in 1998. The show revolved around the experiences of the title character, Felicity, a university student. The show ran for four years.
He wrote and co-produced the thriller film, ‘Joy Ride’ in 2001 which became a critical as well as commercial success. He did not write or produce any other movies for the next five years.
Abrams wrote the screenplay for the action series ‘Alias’ which was about the life and work of a fictional CIA agent, Sydney Bristow and the aliases she adopted to conceal her true career from her friends and family. It ran for five seasons starting from 2001 to 2006.
Continue Reading Below
‘Lost’ is a television drama series co-created by Abrams that ran for six seasons from 2004 to 2010. The series told the story of passengers who survive a plane crash and were stranded on a mysterious tropical island.
He made his directorial debut in 2006 with ‘Mission: Impossible III’ which he also co-wrote. The film had Tom Cruise in the lead and was a big box office hit.
The 2009 science fiction ‘Star Trek’ which he directed and co-produced received highly positive reviews from critics. It was also a commercial success.
He co-produced ‘Mission: Impossible – Ghost Protocol’ in 2011 with Tom Cruise and Bryan Burk. It went on to become the highest grossing Mission Impossible film. The same year, he also wrote, directed and co-produced the science fiction-thriller ‘Super 8’ with Steven Spielberg. Major Works
Abrams’s first biggest success came when he co-created the television show ‘Felicity’ which ran for four seasons from 1998 to 2002. TIME magazine listed it as one of "100 Best TV Shows of All-TIME" in 2007. This show was a big milestone in his career as a screenwriter.
He created the television action series ‘Alias’ which ran for five seasons from 2001 to 2006. The show was ranked among the American Film Institute’s top ten television programs in 2003. It was also listed in the list of the "50 Greatest TV Shows of All Time" in the British magazine ‘Empire’.
His most critically acclaimed television endeavor was the show ‘Lost’ which ran for six seasons form 2004 to 2010 on the ABC. The show has been described by some critics as being among the greatest television series of all time. ‘Lost’ won several nominations and awards, including the prestigious George Foster Peabody Award.
Abrams found his big breakthrough in films with ‘Mission: Impossible III’ (2006), an action spy film which he co-wrote and directed. The film received positive reviews and was a box office success.
Continue Reading Below
He is also well known for his science fiction action film, ‘Star Trek’ which he directed and co-produced in 2009. It was a box office success and was nominated for several awards.
‘Super 8’ (2011), the science fiction thriller which he wrote, directed and co-produced is one of his best known films. The film was about a group of teenagers filming their own horror movie. The film was appreciated for its technical and special effects.
Awards & Achievements
He won two Emmy Awards in 2005 for his television drama series ‘Lost’: Best Director and Outstanding Drama Series.
He was presented The Saturn Award for Best Director by the Academy of Science Fiction, Fantasy & Horror Films in 2012 for his thriller ‘Super 8.’
He is the recipient of two awards from the Producers Guild of America (PGA). He won the award for the Best Drama in 2006 for ‘Lost’ and the Norman Lear Achievement Award in Television in 2013. 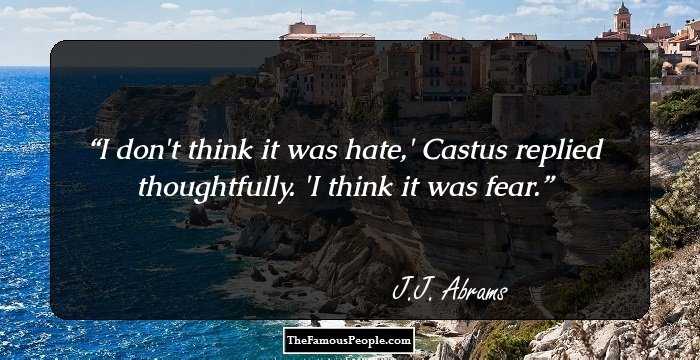 Quotes: Think, Fear, I
Personal Life & Legacy
He married Katie McGrath, a public relations executive in 1996 and has three children.
He has an active interest in politics and has contributed to the campaigns of Bill Clinton, Hillary Clinton, John Edwards, Harry Reid, etc.
Trivia
He met his future collaborator Matt Reeves at age 13.
He is a big fan of Howard Stern, the “Shock jock” radio personality.
His best friend is actor Greg Grunberg whom he often casts in his films and shows.

See the events in life of J.J. Abrams in Chronological Order