DID WE MISS SOMEONE?
CLICK HERE AND TELL US
WE'LL MAKE SURE
THEY'RE HERE A.S.A.P
Popularity Index
101
Journalists #112
Novelists #81
Non-Fiction Writers #45
Quick Facts

Who was Daniel Defoe?

Till date, Daniel Defoe is considered to be the founder of British journalism. In his life, he served as a trader, writer, journalist, pamphleteer, and spy. Starting off to train himself at the ministry, he opted to become a merchant and started several businesses. However, none of those flourished well as he was constantly under the realm of facing bankruptcy and aggressive creditors. It was his political interest and aspirations that led him to serve as a prolific political pamphleteer. He penned a number of political essays and works before finally turning to fiction to pen his most famous work, ‘Robinson Crusoe’. He is widely recalled as one of the earliest proponents of novel writing. He encouraged novel writing and reading along with fellow novelists such as Samuel Richardson and so on. Immensely talented and skilled, he is said to have published over 560 books and pamphlets, on various topics including politics, crime, religion, marriage, psychology and supernatural. Novelists
Journalists
Non-Fiction Writers
British Men
Childhood & Early Life
Daniel Defoe was born as Daniel Foe around 1660 at the parish of St. Giles Cripplegate, London to Annie and James Foe. However, his exact birthdate and birth location is a matter of contest.
His father James Foe was a prosperous tallow chandler and a member of the Butchers' Company. Later on, he changed his name to Daniel Defoe to sound aristrocratic.
Since early on, young Defoe had a first-hand experience of natural plights and disasters as he witnessed the Great Plague of London, the Great Fire of London and the Dutch attacks on Chatham.
He completed his preliminary education from Rev. James Fisher's boarding school and later on took to studying at the dissenting academy at Newington Green in London due to his Presbyterian background. 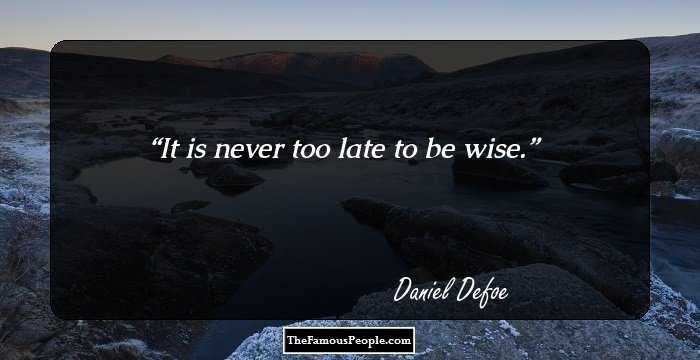 Male Spies
Virgo Writers
Male Writers
British Spies
Career
Initially planning to become a dissenting minister, he gave up on the same to pursue business. He started as a general merchant selling hosiery stuffs, woollen goods and wine. Though his business thrived successfully, he was never out of debt.
Meanwhile, keeping up with his interest in politics, he published his first literary piece in 1683, which was a political pamphlet. Working as a journalist, he published several pieces which supported the King William.
In 1685, he became one of the members of the Monmouth Rebellion but was pardoned. Three years later, when William III was appointed as the king, he served as his close ally and secret agent.
In 1695, he returned to England and started serving as the commissioner of glass duty. His profile included collecting taxes on bottles. The following year, he commenced a tile and brick factory and started living in the parish of Chadwell St Mary.
His first serious publication came in 1697 under the title, ‘An Essay Upon Projects’. The work gave a detailed analysis of proposals for economic and social improvement.
Defending King William, he brought out several literary pieces, the most successful amongst which include ‘The True-Born Englishman’ that defended the king against perceived xenophobia, thus giving a satire on the English claim to racial purity.
In 1701, he penned the Legion’s Memorial for the Speaker of the House of Commons. The following year, after the death of King William III, a political unrest clouded the entire place.
His publication of the 1702 released pamphlet, ‘The Shortest Way with the Dissenters’ led to him becoming a natural target for the succeeding Queen Anne. In the work, he openly criticized the High church Tories and those Dissenters who practiced occasional traditionalism.
As such, he was arrested in July 1703 and put in a pillory on charges of seditious libel. After hearing in the court, he was found guilty and sentenced to an unstipulated term of imprisonment. Furthermore, he was charged of a disciplinary fine and public humiliation in the pillory.
Continue Reading Below
Following his three days of imprisonment, he was transferred to Newgate Prison. However, his stay was cut short as the 1st Earl of Oxford paid for his release in exchange of him serving as an intelligence agent for Tories.
Witness of the Great Storm of 1703, he penned his first non-fiction, ‘The Storm’ in 1704. The book gave a detailed account of the havoc and destruction caused by the natural disaster. It included viewpoints of other eyewitnesses as well.
The same year, he commenced a periodical, ‘A Review of the Affairs of France’. The journal, which ran for three times a week, gave an account of the events that led to Spanish Succession. The publication was a mouthpiece of the Enliush government which promoted the Act of Union.
The Review supported the Harley Ministry first and later Godolphin finally supporting Harley and the Tories in the Tory ministry of 1710 to 1714. With the fall of Tories from powerful position, he continued his writing in support of the Whig government.
Meanwhile, his writings weren’t limited to penning political tales as he explored other genres as well. In 1705, he came up with the anonymously written pamphlet, ‘A True Relation of the Apparition of One Mrs. Veal the Next Day after her Death to One Mrs. Bargrave at Canterbury the 8th of September, 1705’ that gave an insight about the relationship between spiritual and physical realm.
In 1709, he came up with his first lengthy work, ‘The History of the Union of Great Britain’ which was printed by the Heirs of Anderson. It has been noted as the first draft of unification as the information presented goes way back to the 1604 and explains the turn of events which caused the Act of Union 1707
He was later given the responsibility of an adviser to the General Assembly of the Church of Scotland. In 1709, he came up with a massive history of the Union. Though his work had an air of objectivity, it nevertheless ended with his take on the subject
Perceiving the dangers that were inherent in political commentary, he turned to writing fiction. In 1719, he came up with the novel, ‘Robinson Crusoe’ that gave an account of the incidents faced by a true shipwrecked mariner.
He followed this up by some more fiction novels such as ‘The Farther Adventures of Robinson Crusoe’, ‘Memoirs of a Cavalier’, ‘Captain Singleton’, ‘A Journal of the Plague Year’, ‘Colonel Jack’, ‘Moll Flanders’ and ‘Roxana: The Fortunate Mistress’.
Continue Reading Below
Furthermore, he continued his trysts with non-fiction as well and penned the works, ‘The History Of The Remarkable Life of John Sheppard’, ‘A General History of the Pyrates’, ‘A Tour Thro' The Whole Island of Great Britain, Divided into Circuits or Journies’ and ‘The Political History of the Devil’.
In the later years of his life, he switched to writing travel books such as ‘Tour Through the Whole Island of Great Britain’, ‘The Complete English Tradesman’, ‘London the Most Flourishing City in the Universe’.
He also penned editorial pieces, focusing on such subjects as morality, politics and the breakdown of social order in England such as ‘Everybody's Business is Nobody's Business’, ‘Conjugal Lewdness’, ‘A Plan for the English Commerce’. 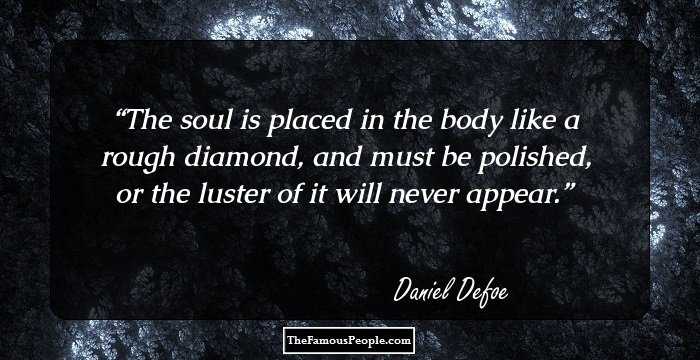 Male Novelists
British Writers
Male Journalists
British Novelists
Personal Life & Legacy
He tied the marital knot with daughter of a London merchant, Mary Tuffley. Though the marriage went through a troubled phase, due to his increasing debts and political difficulties, the two managed to stay together for 50 years.
They were blessed with eight children, of which six survived to adulthood.
He breathed his last on April 24, 1731 and was interred in Bunhill Fields, London. In 1870, a monument was constructed in memory of him.
Recommended Lists: 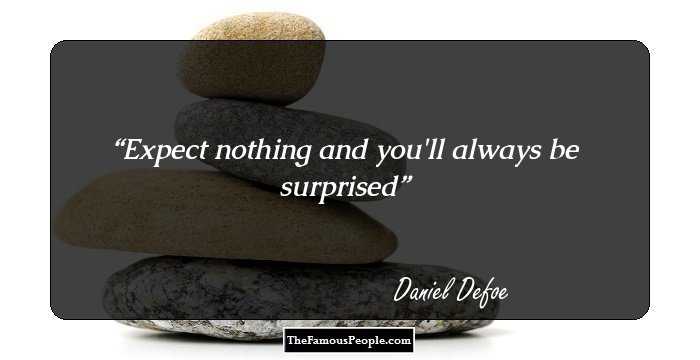 Quotes By Daniel Defoe | Quote Of The Day | Top 100 Quotes

See the events in life of Daniel Defoe in Chronological Order