Houssein South is a British singer-songwriter, YouTuber and social media personality. With his inherent talent and charisma melding perfectly with prodigious musical skills, he is an upcoming star for the next generation. A native of London, Houssein hails from an affluent family. He had been singing since he was a child and at nine, he performed at the 2008 United Kingdom National Tour of the musical ‘Chitty Chitty Bang Bang’ which ultimately resulted in a two-year contract with The Sound of Music's UK tour. After the tours, Houssein was introduced to Vine, where he found fame for the first time. After the short video sharing app closed down for good, he made a successful transition to Musical.ly (now known as TikTok). Since then, he has become the most popular muser in the United Kingdom. He is equally active on other social media platforms as well. In 2017, he went on his first pop music tour and put out his debut single, ‘Higher’. Jade Alleyne
Pop Singers #2332
Singers #9997
3rd June In History
DID WE MISS SOMEONE?
CLICK HERE AND TELL US
WE'LL MAKE SURE
THEY'RE HERE A.S.A.P
Quick Facts

British People
Male Singers
Gemini Singers
British Singers
Male Pop Singers
Rise to Fame
Houssein developed a love for music at an early age. When he was six years old, his father got him a drum set, on which he used to practice almost daily. Three years later, he was cast in a role in the musical ‘Chitty Chitty Bang Bang’ (2008) during its United Kingdom tour. His performance there later earned him a two-year contract with the UK tour of ‘The Sound of Music’ (2009-11).
After returning from the tour, Houssein sought to accumulate a fanbase online. He created a Vine account and started posting content. Vine was one of the most high-traffic social media platforms at the time and Houssein was one of its biggest stars. He garnered over 250 million views at the height of the app’s popularity. However, in 2017, Vine shut down for good. After considering his options, he eventually chose TikTok. As of 2018, he has about 1.4 million fans on the app and 34.4 million hearts. As a muser, he has attended various social media events such as Vidcon EU, VidCon and Playlist Live.
Houssein set up his original YouTube channel on August 20, 2009, and uploaded the first video (about stuffed animals) soon after. His current channel was created on March 21, 2014, and has about 63 thousand subscribers. He is quite popular on other social media platforms as well, with 141 thousand, 118 thousand, and 22 thousand followers on Instagram, Twitter, and Facebook respectively.
Houssein had been doing covers of popular songs for a while. He became part of his first pop musical tour in 2017. He has released two singles to date: ‘Higher’ (2017) and ‘5 Bucks’ (2018).
You May Like

Gemini Pop Singers
British Pop Singers
Gemini Men
Continue Reading Below
Personal Life
Houssein South was born Houssein Güney on June 3, 1999, in London, England. His father, Ramadan Güney, was a British-Turkish Cypriot businessman and politician who owned the Brookwood Cemetery, the largest cemetery in Britain. His mother is Diane Holliday. Houssein’s parents met at the funeral of Dodi Fayed. They later became lovers and were in a relationship until Ramadan’s death on November 2, 2006. Houssein has eight half-siblings. Ramadan had two sons, including Erkin, and four daughters with his wife Süheyla, who died in 1992, while Holliday is the mother of two other children, Kevin and Pamela.
In 1998, Holliday first became famous after she alleged that Fayed was the father of her then two-year-old daughter, Pamela. Fayed had died on August 31, 1997, in a car accident that also killed his lover at the time, Diana, the Princess of Wales. Fayed’s father, Mohammed Fayed vehemently argued against her claims and Holliday was later arrested by the police for suspicion of wasting their time when she reported to the authorities that she had been beaten at a service station and that two unknown assailants had stolen the DNA evidence about her daughter.
Following Ramadan’s death, his children claimed Holliday did not deserve a financial windfall and a bitter court battle ensued. They argued that their father had a vasectomy 30 years prior to his death and hence, Houssein could not possibly be his son. Erkin Güney was accused of hiring an assassin to Kill Holliday but in 2008, was cleared of those charges. In 2010, Holliday won a right to bid for inheritance in a court of appeal. She was eventually awarded the ownership of the remembrance grounds, which is valued somewhere between £700,000 and £1.2 million.
Houssein studied at Hoe Bridge School, a private academic school in Woking, England. He maintained excellent grades throughout his student life and at 13, passed the 12 Common Entrance Exams with straight A's and A's.
In early 2017, he started dating fellow muser Amelia Gething. She is an extremely popular social media influencer in her own right with 488 thousand YouTube subscribers and 450 thousand Instagram followers. 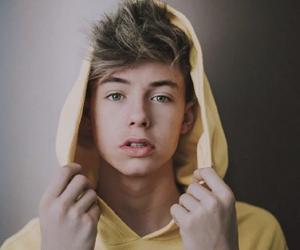