Amelia Gething is a British internet celebrity who first became popular on the lip synching app TikTok. She is also a professional model often seen in promotional campaigns from different brands. Gething became popular owing to her comedy videos on TikTok & YouTube. Her popularity on the social media platforms is new but she has already gained a strong foothold in the heart of her fans which is clear from her rapidly increasing follower base across all the social media platforms that she has graced with her presence. Though she is currently most popular for her comedy videos on YouTube & TikTok, it was Instagram on which she first appeared. Her ability to keep her fans glued to her videos is certainly her key to fame. Her account, ameliagething TikTok is one of the top followed accounts on the app. Ollie Ball
DID WE MISS SOMEONE?
CLICK HERE AND TELL US
WE'LL MAKE SURE
THEY'RE HERE A.S.A.P
Quick Facts

Not much information is available about the career of Amelia Gething before she became an internet celebrity but it is known that she has been into modelling from before she became popular on TikTok. She made her social media debut on Instagram and her first post on Instagram came in the month of May 2015, which was a picture of her own, but IT did not create much hullabaloo at that time. She started gathering a remarkable follower base from the time she became regular on TikTok. Her comedy videos posted on the app where instantly popular. She also extended her posts to YouTube which helped her to gather even more follower base. While she was gaining traction in her online career, her career as a model also took off. She joined the Sandra Reynolds agency as a model and became a successful professional in this competitive field.

She joined YouTube on August 2, 2016 and in a short time has gained huge popularity on it. Her most popular video is the one about “A FAN BROKE INTO MY HOUSE”. She has over 440,000 subscribers on her YouTube channel & over 280,000 followers on her Instagram account. Her musical.ly (TikTok) fan base has crossed the mark of 5 million, which has made her a crowned muser.

Amelia Gething was born in London, England on January 24, 1999. She has never disclosed much about her parents or family. There is also no information about her personal life before she became an internet sensation. She was romantically linked to pop singer & fellow muser Houssein South from 2017 to 2018. She started dating James Dutton in 2020. 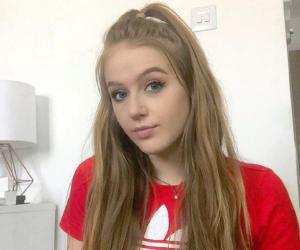