Herman Cain was an American businessman and activist best known for setting up a run for the 2012 presidential nomination from the Republican Party. Born in Tennessee and raised in Atlanta, Herman grew up in a poor family. After earning his bachelor’s degree in Mathematics, he graduated with a master’s degree in Computer Science. He later started working at the U.S. Department of the Navy and joined the Pillsbury Company in 1977. In the 1980s, he was made a senior executive at Burger King, where he successfully operated and managed 400 Burger King stores. He was later appointed as the chairman and CEO of another restaurant chain Godfather’s Pizza and saved it from bankruptcy. He embarked on a political career in the mid-1990s and joined the Republican Party, trying for the Republican presidential nomination in the 2000 elections. He also became the president of the National Restaurant Association, a lobbying organization. He was a strong candidate in 2012 for the Republican presidential nomination, but he took back his name after sexual harassment allegations were filed against him. From 2013, he worked as a contributor on the Fox News channel. Herman Cain was born on December 13, 1945, in Memphis, Tennessee, to Luther Cain and Lenora Davis Cain, in a lower-middle-class family. He was born as the elder of two sons of his parents and was raised in Atlanta, where the family had moved when Herman was a child.

His mother worked as a domestic worker and a cleaning woman, and his father worked as a barber and janitor. His father had also worked briefly as a chauffeur for the president of The Coca-Cola Company, Robert W. Woodruff. His family income was not good enough for them to lead them a comfortable life, but Herman has said that despite being poor, he and his family lived a happy life.

Herman was a good student academically. His parents never let the burden of the household responsibilities fall on his shoulders, and hence, he could concentrate fully on his academics. Herman graduated from S.H. Archer High School, and following his graduation, he enrolled at the Morehouse College and earned a B.Sc. degree in Mathematics.

He then enrolled at Purdue University, where he pursued a postgraduate degree in Computer Science. However, by then, he had begun working at the U.S. Department of the Navy as a ballistics analyst. 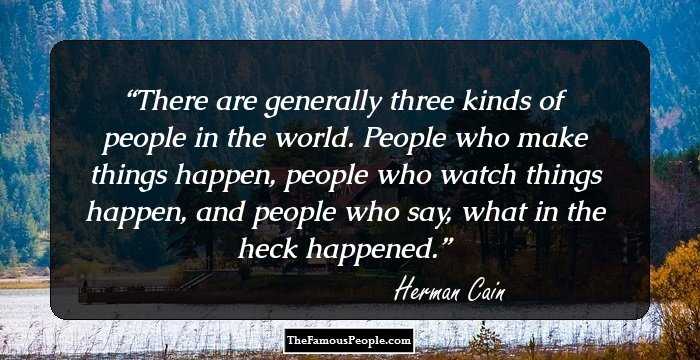 Cain left the Department of the Navy following his master’s degree and was hired to work as a computer system analyst at The Coca-Cola Company office in Atlanta. He then moved to Minneapolis to work as a business analysis director for the company named Pillsbury.

At Pillsbury’s restaurants and food division, he was enrolled on a training program at Burger King, which was a subsidiary of Pillsbury. The brightest employees were trained under the program to nurture future executives.

In the early 1980s, he was assigned to the Burger King division and was given the job of managing 400 Burger King outlets in the Philadelphia area alone. He worked exceptionally well in his new position, and in the next three years, the area under him showed a great growth in business.

He initiated a BEAMER program, under which Herman trained his employees, especially the teenagers, to make the customers smile by smiling themselves. Pillsbury’s then-president Win Wallin was also quite happy with Herman’s performance, and hence, he was assigned to another important task.

In the mid-1980s, Herman was appointed as the CEO and President of another subsidiary of Pillsbury, called Godfather’s Pizza. Around that time, Godfather’s Pizza was struggling in business and was consistently proving to be a failing venture. It was on the verge of bankruptcy.

Herman gave an inspiring speech to the employees on the first day he joined. When Herman realized that there was no chance of recording profits with the current state of affairs, he closed down about 200 unproductive Godfather’s Pizza restaurants and eliminated thousands of jobs. This led Godfather’s Pizza to become a profitable venture yet again. He also led the company to be sold-off for great profits.

He served as the company’s CEO and President from 1986 to 1996 and lived in Omaha, where the company headquarters was situated. He had his first brush with politics while working in that position. In 1994, he was seen on television, arguing with President Bill Clinton on the issues of health care. He was in criticism of the Clinton health care plan, which he believed would cost many jobs throughout the industries.

He also opposed Clinton on the calculations that he presented. This televised meeting caused Herman to become a celebrity among the American conservatives as well as the Republican Party members.

Jack Kemp, a leading Congressman, was quite impressed with Herman’s views on the free market. In 1996, Kemp was chosen as the running mate of the presidential nominee from the Republican Party, and Kemp chose Herman to be an adviser during their presidential campaign.

In the early 1990s, Herman became a member of the board of directors of the Federal Reserve Bank of Kansas City. Within a few years, he was promoted to the position of deputy chairman and later to the position of the chairman of the bank. In 1996, when he became active in politics after joining hands with Jack Kemp, he resigned from his position at the bank and got involved in the Republican Party activism.

In 1996, he was appointed to the position of president of the National Restaurant Association. It was a sleepy trade organization that was not very active until the 1996 presidential election when Herman led it to become a powerhouse of lobbying.

Around that time, numerous groups were campaigning to lower the blood alcohol limit, a change that threatened to affect the business of restaurants that offered liquors. Herman came up with an idea that instead of lowering the blood alcohol limit, stiffer penalties must be applied. This argument was harshly rebuked by members of another group named Mothers Against Drunk Driving

Around that time Herman came in touch with many politicians and began gearing up for his entry into electoral politics. The Association lobbied against many issues such as minimum wages and health care under Herman’s leadership.

In addition, he also served on the board of several companies such as Whirlpool, Aquila, Reader’s Digest, etc.

He quit his position as the president of National Restaurant Association and moved back to Atlanta in the late 1990s and started his political career in the electoral politics. In 2000, he ran for the Republican presidential candidate race. He lost and later said that he knew it was a long shot, and the step was taken to make a political statement.

He also ran for the 2004 Senate election Republican primary but lost the race. In the next year, he became a part of the nonprofit political group called Americans for Prosperity. In the 2006 elections, he ran many radio advertisements where he urged Black Americans to vote for the Republican Party, which is not the traditional norm.

In 2010, Herman addressed several Tea Party rallies as a part of the Tea Party Movement. He was gearing up for the 2012 presidential nomination, where he introduced the “9-9-9” plan, also known as the ‘optimal tax’ plan. However, in the wake of two sexual assault allegations on him, Herman pulled back from the Republican nomination. It also turned out to be the end of his political career.

In the 1990s, he has also been a motivational speaker and authored several books, describing his business attitude that led him to become a successful businessman. Some of the books that he has written include Speak as a Leader, CEO of Self, and They Think You’re Stupid.

In 2008, he began hosting the radio show called The Herman Cain Show, which lasted until 2011. He has also written columns for Newsmax. In 2009, he has also appeared in the documentary film titled An Inconvenient Tax. In 2013, Fox Network announced that Herman would be a contributor to their news programs. 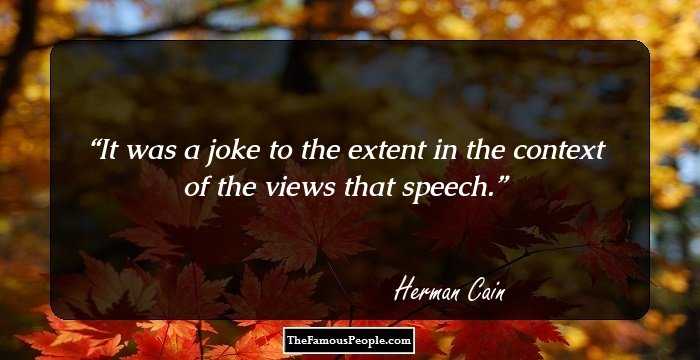 Herman Cain married Gloria Etchison in 1968 and had two children with her.

In 2006, Herman was diagnosed with late-stage colon cancer. After giving a 30 percent chance of survival, he recovered from cancer after taking chemotherapy sessions and surgery.

He was seen attending a Donald Trump rally on June 20, 2020, without wearing a mask. He contracted COVID-19 a few weeks later and died from the infection on July 30, 2020.

See the events in life of Herman Cain in Chronological Order