Alice James is fondly remembered as an American diarist who penned her thoughts, opinions and life events in a diary which was posthumously published. Coming from an intellectual and highly distinguished family, having literary pursuits was natural for Alice. However, she went through a troubled short life as she was the victim of nervous disordered, which were prevalent to women in the Victorian era and were known by the term ‘hysteria’. Nevertheless, despite her failing health and pitiable condition, she was an enigmatic personality blessed with vivid imagination and wittiness. Furthermore, she was an acute social observer and an inquiring and engaging person. She battled with and was tormented by an array of nervous disorders. It was due to her physical illness that she was socially constrained and faced internal conflict all through. However, she did not let the infringements of the body overpower her mind and instead maintained a strong self. To know in details about her life and her thoughts and opinions read through the following lines.

Sam Shoemaker
Continue Reading Below
DID WE MISS SOMEONE?
CLICK HERE AND TELL US
WE'LL MAKE SURE
THEY'RE HERE A.S.A.P
Quick Facts

American People
Leo Women
Childhood & Early Life
Alice James was the youngest of the five children and the only daughter born to Henry James Sr. all her life, she shared a close knit relationship with her brothers and female friends.
Not much is known about her educational qualifications or her academic background and her early life.
Until the death of her parents in 1882, she lived with them. 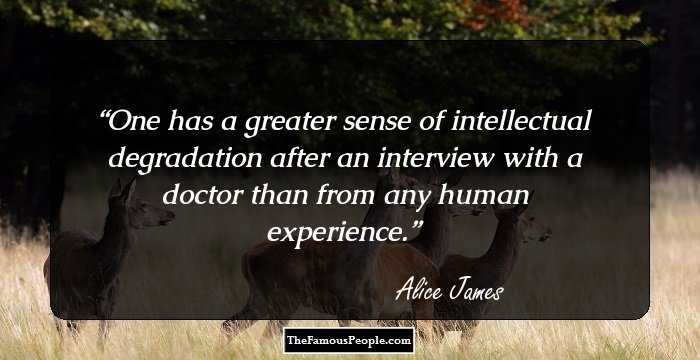 Quotes: Experience, Women
Continue Reading Below
You May Like

The Sexiest Men Of 2020, Ranked
Later Life
During this period of time, women were often diagnosed with hysteria. As there was no set list of symptoms for the disease, any disease that a woman had was fit into the symptoms of hysteria and she was no different.
In 1866, she moved to New York to treat herself with therapeutic exercises. Though the technique did bring in some sort of relief, it was temporary by nature. The effect of the disease was such that she felt both suicidal and patricidal.
With a belief that a change of place would help augment her health condition, she moved to England along with her friend Katherine Peabody Loring.
In 1873, at the age of twenty-five, she started teaching history at the Society to Entourage Studies which she continued for three years until 1876. It was a Boston-based correspondence school for women founded by Anna Ticknor.
Aiming to treat herself from the recurring bouts of hysteria, she received electrical massage in 1884. Despite seeking various treatments, she never got significant relief.
In 1889, she started penning a diary that comprised of witty remarks, opinions and commentary about English life and mannerism. What’s more, to support her belief, she even noted down excerpts from various publications that asserted the same opinion or remark as of her.
Since the diary contained candid commentary on various people whom she had straightforwardly named, it wasn’t published even years after her death. A poorly edited version of the same was published in 1934.
Thirty years after the first edited publication, Leon Edel published the complete edition of the diary which amused it readers. The tone of the write-up was such that she was reckoned as a radical feminist.
In the diary, she penned about herself in which she explicitly mentioned that she did not view her illness as a produce of conflict but instead a struggle between her strong sense of will and moral power against her body.
Continue Reading Below
She even wrote about how she finally decided to give up on muscular sanity to preserve the mind. She even wrote about what caused the nervous disorder though her views provided a conflicting stream of opinion.
While initially, she claims that the illness acts as a barrier for the individual to relieve himself from the unbearable conflicting impulses, feelings, emotions and social demands, later on she comments that certain people fake psychosomatic illness to avoid social problems. 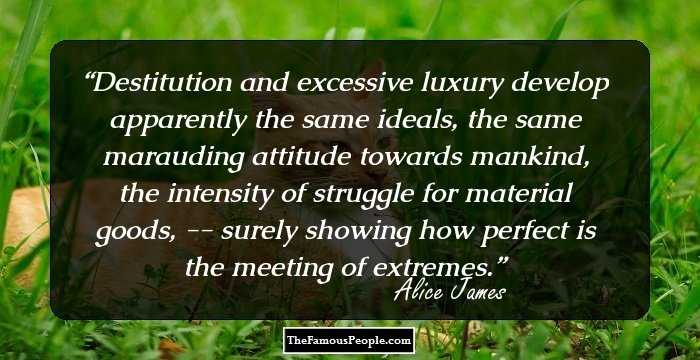 Personal Life & Legacy
In her lifetime, she never tied the nuptial knot. However, it is reported that her brother William shared a close relationship with her and was also romantically interested in her. This is noted from his mock sonnet that he penned for her and the five sketches that he made of her.
By 1882, she suffered from two major breakdowns. Towards the later end of her life, she suffered from a couple of more nervous breakdowns finally succumbing to breast cancer on March 6, 1892.
Almost a century after her death, in 1980, Jean Strouse published her thoughts, opinion and life in the work titled, ‘Alice James: A Biography’. In it, he portrayed her both as an icon and victim.
The following year, Ruth Bernard Yeazell published ‘The Death and Letters of Alice James’. In 1993, there was a play written by Susan Sontag about her life - ‘Alice in Bed’. The play shifted between the feelings of sympathy and impatience.
Trivia
Daughter of American theologian Henry James Sr, she was an American diarist who suffered from major nervous disorder 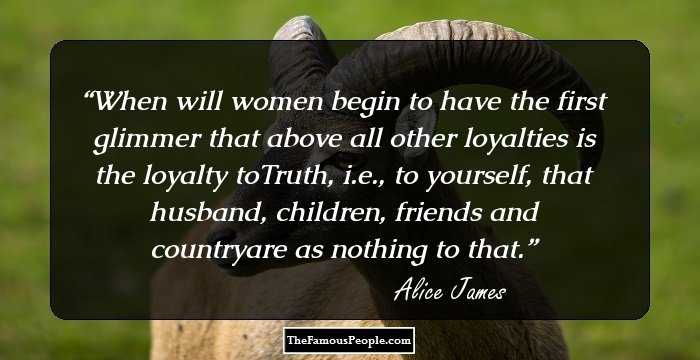 Quotes: Yourself, Friends, Women, Will, Children
You May Like

Quotes By Alice James | Quote Of The Day | Top 100 Quotes

See the events in life of Alice James in Chronological Order 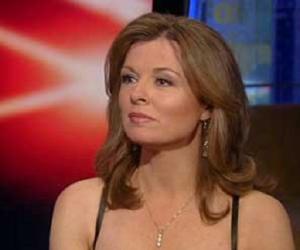 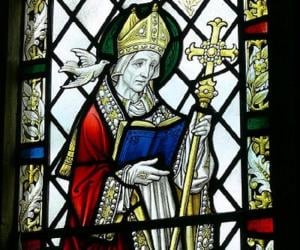