Advanced Search
Henry Clay was an influential politician in the nineteenth century America. In the political circle, he was referred as ‘The Great Pacificator’ or ‘The Great Compromiser’. A lawyer by profession, he chose to sacrifice his career in order to serve his nation, which at that time, was going through a precarious period. It was the time when the anti- slavery movement almost split the nation into two halves. He brokered a compromise between the slaveholding and slave free states and thus delayed the Civil War for a couple of years. Much before that, Clay played an important part in leading the nation into the war with Great Britain in 1812. He was also the proponent of the ‘American System’, an economic policy aimed at strengthening the federal system. At the same time, he had a colorful character. To resolve disputes, he often took recourse to duel. Many people also disliked him for his blunt and dictatorial stance. His attitude to the blacks also dismayed many. He criticized slavery and advocated gradual emancipation; but wanted free blacks to be relocated to Africa. Even most ardent of Clay’s critics had to admit that he was a nationalist, dedicated to the cause of political integration and economic development of his homeland. Ron DeSantis
12th April In History
DID WE MISS SOMEONE?
CLICK HERE AND TELL US
WE'LL MAKE SURE
THEY'RE HERE A.S.A.P
Quick Facts

American People
American Men
Aries Leaders
Male Leaders
American Leaders
Childhood & Early Life
Henry Clay was born on April 12, 1777 to Reverend John and Elizabeth Clay in a plantation in Hanovar County in Virginia. Henry was the seventh of the couple’s nine children. He lost his father in 1781, when he was barely four years old. While Sir John left most of his properties to his wife, Henry received two slaves as his share.
Some time later, her mother Elizabeth married Captain Henry Watkins, who moved the family to Richmond. She bore seven more children with him. Watkins took good care of all his children and was affectionate to Henry.
As he grew up, Henry first secured a position in the office of the Virginia Court of Chancery. Later he became the secretary to the Chancellor, George Wythe. Wythe was also a noted scholar and a professor of law. While working under him Henry began to study law. Noticing his aptitude for the subject, Wythe secured him a position with Robert Brook, the Attorney General of Virginia. Finally, in 1797, Clay was admitted to the bar and allowed to practice law both in Virginia and Kentucky. 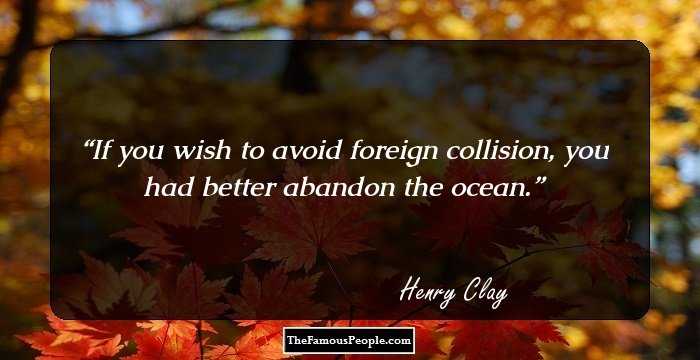 Quotes: You
Continue Reading Below
Career
In November 1797, Clay moved to Lexington, which was at that time a growing town in the state of Kentucky. Quickly, he earned a name for his legal skills. However, many of his clients offered land, animals and slaves in lieu of money. Henry accepted them gladly and very soon acquired a plot of land and a hotel in Lexington.
Clay entered politics early in life. In 1803, he became the representative of Fayette County in the Kentucky General Assembly. At that time he was only 26 years old and not legally eligible to stand for election. However, the fact was somehow overlooked.
From 1804 onwards, Henry started buying plantation land and called it Ashland. In 1806, he and his family shifted to the new estate and began to grow tobacco and hemp. Ashland became his home till his death.
In 1806, while Clay was still legally underage, he was sent to the Senate by Kentucky legislative assembly to fill up the seat vacated by John Breckinridge. He was sworn in on December 29, 1806. However, the term ended within three months and he went back to Kentucky in the beginning of 1807.
On coming back, Clay was elected as the Speaker of the Kentucky House of Representatives. During that time, suits for the aristocrats were made from broadcloth made in Britain. On January 3, 1809, he introduced a resolution that required the members to come in homespun suits. The intention was to boycott British goods. Only two members voted against the resolution.
In 1810, Clay was sent to the Senate for a second time. This time, he was required to fill the seat vacated by Senator Buckner Thruston. This term was also of short duration.
In 1811, Henry Clay was elected to the House of Representatives and was chosen as the Speaker of the House. At that time, he was only 34 years old. He immediately formed different committees, filling them with his own men. Thus he not only wrestled control of the house, but also made the position of Speaker one of political force, second only that of the President. He remained in the post until 1814.
At the same time, Clay became one of the leaders of the faction called the War Hawks. He used his position to urge the government to declare war against Great Britain in June 1812.
Although his political career required him to shift to Washington, he did not neglect his plantation at Kentucky. By 1812, Ashland became one of the largest plantations of this area. It encompassed 600 acres of land and employed 60 slaves.
Continue Reading Below
In 1814, Clay was chosen as a member of the peace delegation at Ghent, Bulgaria. He was instrumental to the signing of the treaty that ended the War of 1812.
In 1815, Clay was reelected as the Speaker of the House of Representatives and remained so until the end of the term in 1821. He was one of the architects of ‘The Tariff of 1816’, which had been designed to enable American industries to compete with their British counterparts. It was a part of the national economic plan, which Clay called ‘The American System’.
In 1816, Clay helped to establish the American Colonizing Society and became its President. The aim of the society was to relocate the free blacks to Africa. The society founded Monrovia on the western coast of Africa as a haven for free slaves. Now, the city is the capital of Liberia.
The ‘Mississippi Compromise of 1820’ was another of his important achievements of this period. The bill, drafted by Clay, not only resolved crisis between the slaveholding and slave free states, but it also forbade slavery north of 36° 30' latitude except Missouri.
Clay was selected as the Speaker for the House of Representatives for the third time in 1823. The next year, he stood for the office of President, but lost. However, he became the Secretary of the State in 1825 in the administration of President John Quincy Adams and remained in the post till 1829.
In 1831, Clay was elected to the Senate and very soon it became his political home. Resolving the ‘Nullification Crisis’, was one of his greatest achievements during this period. South Carolina had refused to pay the high tariff imposed by the federal government in 1828 and threatened to secede. On the other hand, President Jackson had threatened to send the army and hang every man, who refused to pay. Clay once again brokered a deal between the two and resolved the crisis.
In 1832, Clay contested for the office of the President once again, but lost. Later that year, he formed the Whig Party along with other National Republican leader. The party later produced many great leaders including Abraham Lincoln.
In 1844, Clay was nominated by the Whigs to stand for the post of the President; but this time too he failed to win the election because of the opponent’s populist policies. In 1848, he did not get the nomination and decided to retire.
However, the retirement was short lived and Clay returned to the Senate in 1849. The political confrontation over expansion of slavery to newly acquired lands had by then reemerged. Once again, Clay mediated between the warring groups and found a solution. The bill he drafted has since been known as ‘Compromise of 1850’. It was probably the last major bill drafted by Henry Clay. 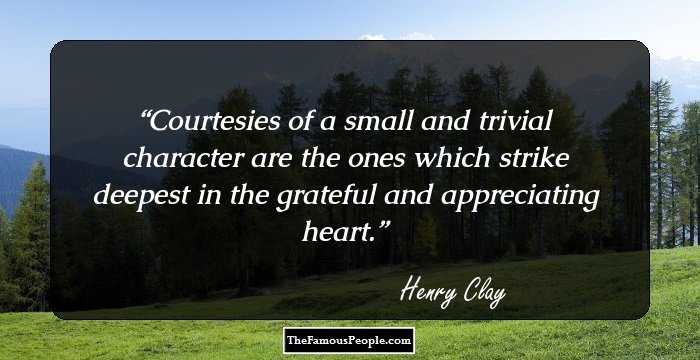 Quotes: Heart, Character
Major Works
”The Missouri Compromise of 1820’, the ‘Compromise Tariff of 1833’, and the ‘Compromise of 1850’ are three most important works in the life of Henry Clay. While the first and the last were aimed at maintaining the integrity of the nation the ‘Tariff of 1833’ tried to secure its economic development. Clay’s fame as a compromiser and pacificator also stemmed from these bills.
Personal Life & Legacy
Henry Clay married Lucretia Hart on April 11 1799, within two years of starting his legal career. The marriage helped him gain social status as well as economic security. It is said, that although Lucretia was rather plain she had a strong personality and had positive influence on Clay.
The couple had eleven children; five sons and six daughters. Clay was very fond of his daughters; but to his extreme grief, all of them died at a young age. His seventh child Henry Clay Jr. also died at the Battle of Buena Vista during the Mexican-American War while Clay Sr. was still alive.
Clay died on June 29, 1852 at the age of 75. He was suffering from tuberculosis, which ultimately killed him. He was survived by his wife Lucretia and four sons Theodore, Thomas, James Brown and John Morrison. In his will, he freed all his slaves.
Henry Clay was buried at Lexington Cemetery. There are many memorials, roads and schools named after him all across America. He has also been honored by a cenotaph in the Congressional Cemetery in Washington.
Between 1870 and 1908, Clay had appeared on different denomination of postage stamps issued by the US Postal Service. He was later included under Great Americans series of postage stamps. 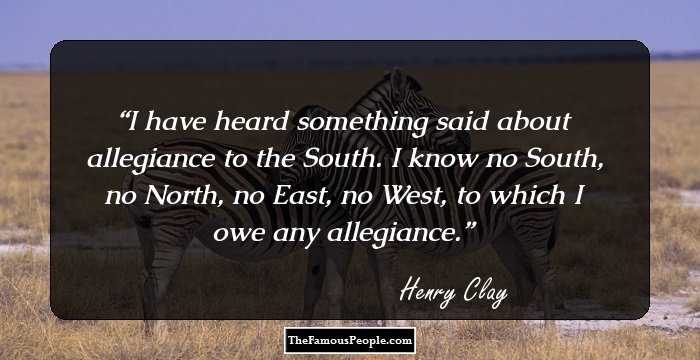 See the events in life of Henry Clay in Chronological Order