Advanced Search
Harry Chapin was an American singer-songwriter famous for his folk rock songs like ‘Taxi’, ’W*O*L*D’, and ‘Sniper’. A highly talented and popular singer, he gained much fame for his self-described ''story song'', a narrative form that borrowed heavily from older talking blues primarily dealing with themes related to lost opportunities, cruel ironies and life's hypocrisies. Born as one of the sons of Jim Chapin, a legendary percussionist, Harry was exposed to music at an early age. He played the trumpet as a child and soon switched over to the guitar. He performed with his brothers as a teenager and also played music occasionally with his father who had divorced his mother when Harry was young. He graduated from the Brooklyn Technical High School and studied at Cornell University before embarking on a career as a documentary filmmaker. He soon switched gear and ventured into a musical career and found success with his debut album ’Heads & Tales’. He soon gained a reputation as a classy folk rock singer and also became known for his work on Broadway productions. Along with being a singer par excellence, he was also a committed humanitarian who fought to end world hunger. The life of this amazing human being was cut short by a fatal accident which claimed him at the age of 38. Cause of Death: Traffic Collision

American Celebrities
Lyricists & Songwriters
Pop Rock Singers
Folk Rock Singers
American Men
Childhood & Early Life
Harry Forster Chapin was born on December 7, 1942, in Brooklyn, New York City, United States, to Jeanne Elspeth (née Burke) and Jim Chapin, a well-known percussionist. His father had worked with the bandleaders Tommy Dorsey and Woody Herman.
Harry had three siblings and his brothers Tom and Steve also became musicians in future. As a child he started playing the trumpet before taking up the guitar. His parents divorced when he was around eight and he went to live with his mother.
He trained at the famed Greenwich House Music School on Barrow Street in Greenwich Village and began singing in the Brooklyn Boys Choir. He also performed with his brothers as a teenager and their father also joined them occasionally on the drums.
He graduated from Brooklyn Technical High School in 1960 and briefly attended the United States Air Force Academy. He also studied at Cornell University for a while but did not complete a degree. 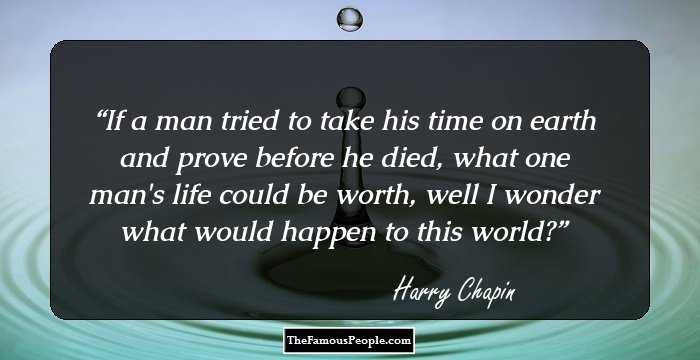 Quotes: Life, Time, I
Continue Reading Below
Career
Despite his deep love for music, Harry Chapin’s original career choice was to become a documentary film-maker. He directed ‘Legendary Champions’ in 1968, which was nominated for a documentary Academy Award. However, his career as a documentary film-maker was short-lived as he soon shifted his focus to music.
In 1971, he began playing music in various nightclubs with John Wallace, Tim Scott and Ron Palmer. He also made an album with his brothers Tom and Steve but it was unsuccessful.
He released his debut album ‘Heads & Tales’ in 1972. It was a moderate success and spawned the hit single ‘Taxi’. He followed it up with another album, ‘Sniper and Other Love Songs’ in quick succession the same year.
His folk rock songs gained a huge fan following and his fans eagerly awaited his next release. Over the ensuing years he released ‘Short Stories’ (1973), ‘Verities & Balderdash’ (1974), ‘Portrait Gallery’ (1975), and ‘Greatest Stories Live’ (1976). His 1974 single ‘Cat's in the Cradle’ was a big hit.
During the 1970s he also began working on Broadway productions. He wrote and performed the musical ‘The Night That Made America Famous’ (1975) and also wrote music and lyrics for the musical ‘Cotton Patch Gospel’ that was released after his death.
In 1978, he released the album ‘Living Room Suite’ which had the songs ‘It Seems You Only Love Me When It Rains’, ‘Why Do Little Girls’, ‘Flowers Are Red’, and ‘Somebody Said’.
His album ‘Sequel’ released in 1981 was the last complete album released during Harry's lifetime. The title song ‘Sequel’ reports further events in the lives of Harry and Sue, the characters in his 1972 hit song ‘Taxi’. 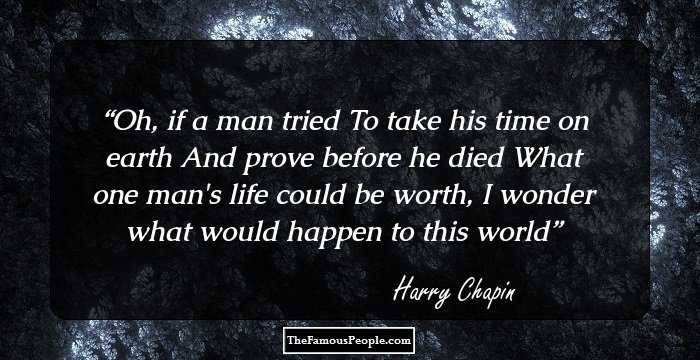 Quotes: Life, Time, I
Major Works
The song ‘Taxi’ was his first major hit. Considered to be his career defining work, the song helped establish Chapin's musical style and fame. The song tells the story of Harry, a cab driver, who picks up a lady passenger on a rainy night and recognizes her to be a former lover.
His folk rock song ‘Cat's in the Cradle’ topped the Billboard Hot 100 in December 1974. It became the best known of his works and a staple for folk rock music. The song was nominated for the 1975 Grammy Award for Best Male Pop Vocal Performance.
Philanthropic Works
Harry Chapin was someone who believed in giving back to the society. Combating world hunger was one of the humanitarian causes he was devoted to. He co-founded the organization World Hunger Year with radio personality Bill Ayres.
He also performed at several charity concerts and sales of his concert merchandise were used to support World Hunger Year. 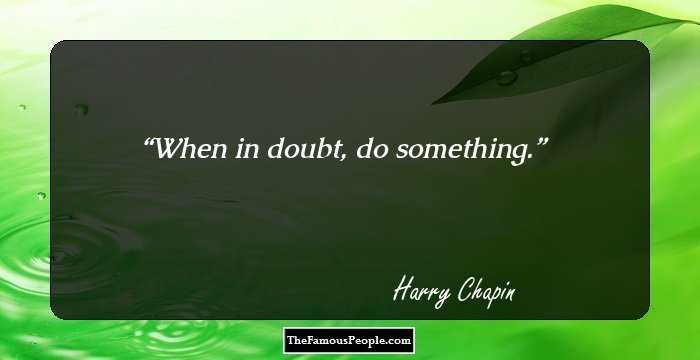 Awards & Achievements
Chapin was posthumously awarded the Congressional Gold Medal for his campaigning on social issues in December 1987.
Personal Life & Legacy
Harry Chapin met Sandy Cashmore (née Gaston), a New York socialite, in 1966. She was nine years his senior. The couple soon fell in love and tied the knot. Upon his marriage he became the stepfather to Sandy’s three children from a previous marriage and the couple went on to have two children of their own.
He was killed in a car accident on July 16, 1981. At the time of his death, he was working on several songs that were released posthumously.
The Lakeside Theatre at Eisenhower Park in East Meadow, New York, was renamed "Harry Chapin Lakeside Theatre" during a memorial concert held one month after his death.
Recommended Lists:
Musicians #1026
Singers #563
Lyricists & Songwriters #658

See the events in life of Harry Chapin in Chronological Order