Born In: Königsberg, Kingdom of Prussia

Gustav Robert Kirchhoff was a German physicist who made major contributions to the fields of thermochemistry and electrochemistry. His findings helped increase the fundamental understanding of black-body radiation, electrical circuits, and spectroscopy. He has had laws of thermochemistry, circuit theory, and thermal emission named after him. He laid the framework for using mathematics to understand the science of physics, which was a very important step in the scientific field. Despite numerous challenges he faced in his lifetime, including his disability, he was persistent in his research and continued to explore various expanses of science. The laws, named after him, are widely used today by many physicists to solve complex physics problems. The many discoveries he made during his lifetime will never be forgotten, as they were essential to the understanding of modern theoretical physics. His life showed that with intellect and dedication, great scientific achievements can be made. He is a symbol of excellence for every aspiring scientist and his life’s work could be described as a phenomenal tribute to science. Without his remarkable contributions, modern physics may not be where it is today.
Continue Reading Below Born In: Königsberg, Kingdom of Prussia

German People
Male Scientists
Male Physicists
Pisces Scientists
German Physicists
Childhood & Early Life
His family was a part of the intellectual community of Konigsberg and he was raised with the mindset that serving the state was really the only open course for him. University professors were civil servants in Prussia at this time and his parents expected him to become a professor and serve his state.
He attended the Albertus University of Konigsberg and received his early education from Franz Neumann, the noted theoretical physicist, and Friedrich Richelot, the mathematician.
At the university, he studied under the guidance of Franz Neumann and Friedrich Julius Richelot. While studying in university, he made his first outstanding research contribution related to electrical currents, ‘Kirchhoff's Law’, in 1845.
He obtained his doctorate degree in 1847 and moved to Berlin, where he stayed until he received a professorship at Breslau.
Continue Reading Below
You May Like

Famous Beautiful Women With Green Eyes
Career
In 1850, he became a professor of physics at the University of Breslau, where he met Robert Bunsen, with whom he struck a lifelong friendship. He worked there for four years until he was offered a post of Professor of Physics at the University of Heidelberg.
In 1858, he proposed ‘Kirchhoff’s law of thermochemistry’ which showed that the variation of the heat of a chemical reaction is given by the difference in heat capacity between products and reactants.
In 1859, while at Heidelberg, he proposed his law of thermal radiation. He was able to provide proof of it in 1861, when it became an accepted law of physics and chemistry.
In 1861, he and his colleague, Robert Bunsen, examined the spectrum of the sun and were able to identify the chemical elements in the sun's atmosphere. They proved that the elements, when heated to specific temperatures, emit colored lights and also discovered two new elements, caesium and rubidium in the course of their investigations.
After all of these discoveries he was offered the first position officially dedicated to theoretical physics at the University of Berlin in 1875, which he held until his death.
After he took the position in Berlin, he came out with his best known treatise which is the ‘Vorlesungen über mathematische Physik’.
Major Works
His first and foremost notable work was the introduction of Kirchhoff’s Circuit Laws in 1845. It allowed calculation of currents, voltages and resistances in electrical circuits with multiple loops. The first law states that algebraic sum of currents in a network of conductors meeting at a point is zero. The second law is that, the directed sum of voltages around any closed network is zero.
In 1857, he became the first scientist to show that electric current flows at the speed of light through a resistance less wire.
He contributed greatly to the field of spectroscopy by formalizing three laws that describe the spectral composition of light emitted by incandescent objects. He coined the term ‘black body radiation’ and is also known for being the first to explain the dark lines in the sun's spectrum.
Awards & Achievements
In 1862, he was awarded the ‘Rumford Medal’ for his work on solar spectra.
In 1877, he was awarded the ‘Davy Medal’ along with Robert Bunsen for their extraordinary researches & discoveries in spectrum analysis.
In 1887, he posthumously became the first recipient of the ‘Janssen Medal’ for his spectacular work on the science of spectroscopy.
Personal Life & Legacy
After graduating in 1847, he married Clara Richelot, the daughter of his mathematics professor, Richelot. They had two daughters and three sons but Clara died in 1869 and he alone raised his children.
His life as a single parent was made even more challenging by a disability that forced him to use crutches or a wheelchair most of the time.
In 1872, he married Luise Brömmel, who was from Goslar, in Heidelberg.
He died on October 17, 1887, at the age of 63, during his professorship at Berlin. He was buried in the St. Matthäus Kirchhoff Cemetery in Schöneberg, Berlin.
You May Like

See the events in life of Gustav Kirchhoff in Chronological Order 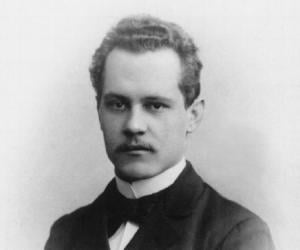