An ‘Oscar’ award-winning performer, Gregory Peck was one of the most commendable actors of Hollywood. He was popularly known for his portrayal of larger-than-life characters. Unlike other actors of his generation, he did not struggle in the initial days of his career; he achieved popularity as an actor in his first year itself. In fact, out of the five nominations won by him at the ‘Academy Awards,’ four of them came during the early days of his career. An actor with a strong physique, Peck was known for doing a majority of the stunts, rarely using body or stunt double. An actor with a troubled childhood, he never let his past get in the way of his successful career. He realized his passion for acting at a young age and started developing his skills under the guidance of ace acting teachers. He went on to make a name for himself in the film industry for his top-class acting skills and the ability to act in varied genre of films. He was also known for his humanitarian efforts and was honored with the 'Presidential Medal of Freedom' in 1969. Gregory Peck was born on April 5, 1916, in San Diego, California, USA, to Bernice Mae ‘Bunny’ and Gregory Pearl Peck. Born into a family of Irish-English-Scottish descent, he was raised a Catholic.

His parents separated when he was just six years old, leaving him under the care of his maternal grandmother. Upon the death of his grandmother four years later, his father took up the responsibility of raising him.

Academically proficient, Peck received his basic education from ‘St. John's Military Academy’ and ‘San Diego High School.’ For a year, he took up theatre and public-speaking courses at ‘San Diego State Teacher's College’ before enrolling at the ‘University of California, Berkeley.’

In 1936, he joined the ‘University of California, Berkeley’ as a pre-medical student, but majored in English. It was the university’s acting coach Ky Ebright who saw his potential acting talent. Edwin Duerr, director of the university's ‘Little Theatre,’ enrolled him in the acting group. Soon, he started performing in plays and dramas. 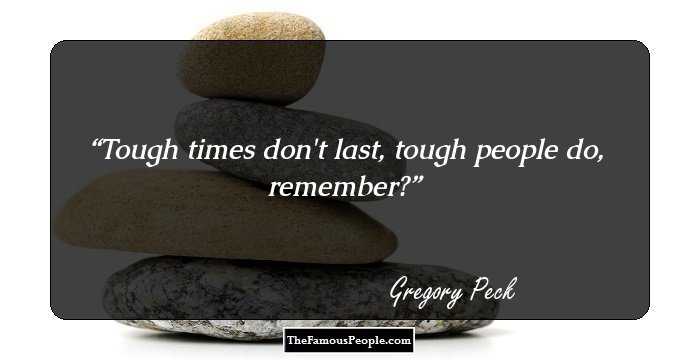 Upon completing his graduation, he moved to New York City to polish his acting skills. For the same, he took admission at the ‘Neighborhood Playhouse’ to gain knowledge from the legendary acting teacher Sanford Meisner. To earn a living, he took up menial jobs.

He made his stage debut in 1941 in George Bernard Shaw's play ‘The Doctor's Dilemma.’ A year later, he was seen in the Broadway production of ‘The Morning Star’ opposite Emlyn Williams. The same year, he gave his second Broadway performance alongside Edward Pawley in ‘The Willow and I.’

He made his big screen debut, playing the character of a Russian guerrilla fighter, in the film ‘Days of Glory’ released in 1944. It was his second movie ‘The Keys of the Kingdom’ that brought him rave reviews. He received an ‘Academy Award’ nomination for his performance.

From then on, he started showcasing his acting prowess, taking up diverse projects and playing his characters with great panache. ‘The Yearling,’ which released in 1946, earned him rave reviews from critics. His exceptional performance earned him an ‘Academy Award’ nomination.

Following this, he earned his third and fourth ‘Academy Award’ nominations under the ‘Best Actor’ category for his films ‘Gentleman’s Agreement’ and ‘Twelve O'Clock High.’ Both the films proved his versatility as an actor. While the former was a drama film, the latter was a war film about aircrews in the US Army.

Meanwhile, he was also seen in films like ‘Spellbound,’ ‘Duel in the Sun,’ ‘The Paradine Case,’ and ‘The Gunfighter.’

In 1953, he was cast alongside Audrey Hepburn in her Oscar-winning role in the movie ‘Roman Holiday.’

�In 1961, the iconic film ‘The Guns of Navarone’ was released wherein he was seen playing the character of ‘Captain Keith Mallory.’ The same year, ‘Cape Fear’ was also released.

His role as ‘Atticus Finch,’ a Depression-era lawyer and widowed father, in the film ‘To Kill a Mockingbird,’ won him his fifth ‘Academy Award’ nomination. Adapted from Harper Lee’s novel and released in 1962, the film further cemented his position as an ace actor.

It was his sheer talent and exceptional acting kills that made him the president of the ‘Academy of Motion Picture Arts and Sciences’ in 1967. The same year, he was appointed the chairman of the ‘Board of Trustees of the American Film Institute,’ a position which he served until 1969.

In 1970, rumors of him being the possible Democratic candidate for the office of the California governor started doing the rounds due to his unflinching trust and support for the party. However, he clarified that he had no intention of holding a political office.

An ardent detractor of ‘Vietnam War,’ he produced a film adaptation of Daniel Berrigan's play ‘The Trial of the Catonsville Nine’ in 1972. The plot revolved around the prosecution of a group of Vietnam protesters for civil disobedience. Five years later, he played the titular role of ‘General Douglas MacArthur’ in the film ‘MacArthur.’

Starting from the 1980s, he took up TV projects and starred in a number of series. While he played the character of ‘Abraham Lincoln’ in ‘The Blue and Gray,’ he was also cast as ‘Monsignor Hugh O'Flaherty’ in the television film ‘The Scarlet and The Black.’

The year 1991 witnessed the release of his last film ‘Other People’s Money.’ In the film, he played the role of a business owner who tries to prevent his company from being taken over by a Wall Street liquidator. He retired from films thereafter and spent his time touring around the world.

In 1998, he came out of retirement for his last performance before the camera. He appeared in the miniseries version of his film ‘The Moby Dick.’ The role won him a ‘Golden Globe Award’ under the ‘Best Supporting Actor in a Series, Miniseries or Television Film’ category. 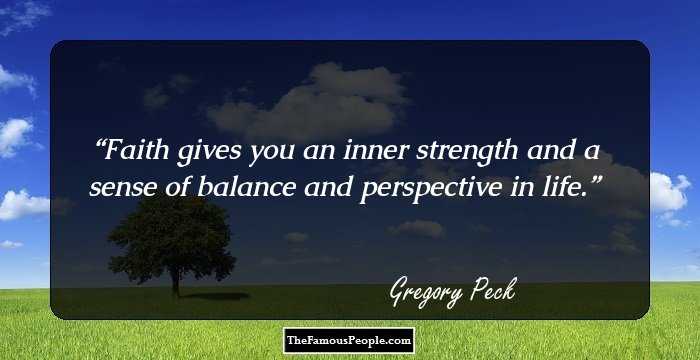 For his acting skills, he was nominated five times for the ‘Academy Awards.’ He won the prestigious award in 1962, for playing the character of ‘Atticus Finch’ in the movie ‘To Kill a Mockingbird.’ Six years later, he was awarded the Academy's ‘Jean Hersholt Humanitarian Award.’

He was the proud recipient of multiple ‘Golden Globe Awards.’ He had received the awards for his movies ‘The Yearling,’ ‘To Kill a Mockingbird,’ and ‘The Boys from Brazil.’ He also received the award for the TV adaptation of his film ‘The Moby Dick.’

The year 1969 witnessed him being felicitated by US President Lyndon Johnson with the nation's highest civilian honor ‘Presidential Medal of Freedom.’

In 1993, at the 43rd ‘Berlin International Film Festival,’ he was honored with an ‘Honorary Golden Bear.’ Five years later, he was presented with the ‘National Medal of Arts.’ In 2000, he was made Doctor of Letters by the ‘National University of Ireland.’

He married Greta Kukkonen in October 1942. The couple was blessed with three sons, Jonathan, Stephen, and Carey. The couple separated in 1955, but maintained cordial relations with each other.

Following legal separation from his first wife, he walked down the aisle for the second time with Paris news reporter Veronique Passani. The couple was blessed with a son Anthony Peck and daughter Cecilia Peck.

He died in his sleep on June 12, 2003 and was survived by his second wife and children. His mortal remains were buried in the ‘Cathedral of Our Lady’ of the ‘Angels Mausoleum’ in Los Angeles, California.

He was honored with a star on the ‘Hollywood Walk of Fame’ at 6100 Hollywood Blvd.

In 2011, the U.S. postal department honored him by issuing a postage stamp commemorating him.

He was the first native Californian to win an ‘Academy Award’ under the ‘Best Actor’ category, which he won for his film ‘To Kill a Mockingbird.’

See the events in life of Gregory Peck in Chronological Order