(American Writer Known for His Novels: ‘The City and the Pillar’, ‘Julian’, ‘Myra Breckinridge’ and ‘Burr’)

Eugene Luther Gore Vidal was an American writer, novelist, essayist, screenwriter and playwright. Vidal was born in New York and brought up in California by his Broadway actress mother and army officer father. When he finished college, he went to join the army and became a warrant officer, until he fell ill because of arthritis. He started writing when he was only 21 and wrote many controversial, ahead of his time novels, essays, memoirs and film scripts. The most controversial work of his literary career was his second novel called ‘The City and the Pillar’, which had an unflustered portrayal of homosexuality in it. It shocked the society at the time so much so that New York Times refused to review his books for the next 5 years, which compelled him to write under a pseudo-name for some years. His writings are considered to be sharp and witty. He was a broad-minded writer, who often wrote satirical statements on sex, gender, gays, etc. Vidal was a self proclaimed bisexual who remained in a long term relationship with his partner Howard Austin. Sam Harris
DID WE MISS SOMEONE?
CLICK HERE AND TELL US
WE'LL MAKE SURE
THEY'RE HERE A.S.A.P
Quick Facts

American Celebrities
Intellectuals & Academics
American Men
Phillips Exeter Academy
Male Writers
Childhood & Early Life
Vidal was born in the Cadet Hospital of the United States Military Academy in West Point, New York, to Eugene Luther Vidal and Nina Gore. His father was an Army Air Corps pilot at the Academy, who also co-founded 3 American airlines.
Vidal’s mother used to act in the Broadways; his parents divorced when he was only 10 years old. His mother married two more times after that as a result of which he had four-half siblings and four step-siblings.
He was brought up in Washington D.C. and studied in Sidwell Friends School and St. Albans School. Then he went to study in France but came back to the United States at the onset of World War II.
He got himself enrolled in the army and became a warrant officer. But in 3 years, he caught hypothermia which caused rheumatoid arthritis and he became a mess officer instead. 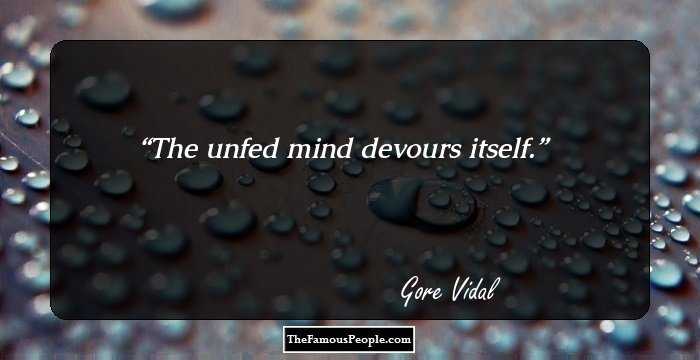 Continue Reading Below
Career
In 1946, Vidal published his first ever literary work, a novel based on his experiences in the army, ‘Williwaw’. The work was influenced with the World War II and his experiences while doing the Alaskan Harbor Detachment duty.
In 1948, Vidal published ‘The City and the Pillar’. It caused controversy in the media for its unruffled usage of homosexuality as the main theme of the novel. The main protagonist was a spitting image of James ‘Jimmy’ Trimble III.
In 1950s, Vidal started writing mystery books under the fake identity of ‘Edgar Box’ because after his controversial novel ‘The City and the Pillar’, New York Times banned his books from being reviewed by the publication.
In the late 50s, his play ‘Visit to a Small Planet’ was published and turned into Broadway. Another two plays of his were televised ‘A Sense of Justice’ and ‘Honor’. He also contributed to the screenwriting of ‘Ben-Hur’.
In the late 60s, Vidal wrote novels like ‘Julian’ which was based on the Roman Empire, ‘Washington D.C.’ which was a political novel based on Roosevelt’s era and ‘Myra Breckinrodge’ which was a comedy based on sex and popular culture.
In the 70s and 80s, Vidal did work like ‘Weekend’, ‘An Evening With Richard Nixon’, ‘Two Sisters: A Novel in the Form of a Memoir’, ‘Burr’, ‘1876’, ‘Lincoln’, ‘Empire’, ‘Creation’, ‘Myron’ which was a sequel to ‘Myra Breckinridge’, ‘Kalki’.
In 90s and 2000s, Vidal came out with works like ‘Hollywood’, ‘Live from Golgotha: The Gospel according to Gore Vidal’ which was a comedy novel, ‘The Smithsonian Institution’, ‘The Golden Age’, etc.
Throughout 90s and 2000s, he acted in movies like: ‘Bob Roberts’, ‘Gattaca’, ‘With Honors’, ‘Igby Goes Down’ and ‘Trailer for the Remake of Gore Vidal’s Caligula’. He gave voice for his character in ‘Simpsons’ and ‘Family Guy’. 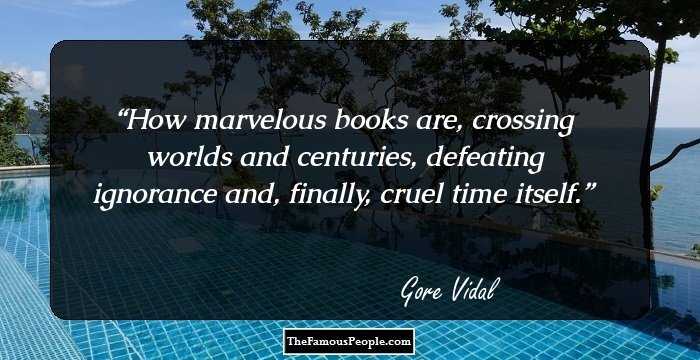 Quotes: Time, Books
Personal Life & Legacy
In 1950, he came into a long term affair with Howard Austen. He made public statements stating that he had a strong relationship with Austen because they do not have sex with each other as according to him sex complicates everything.
Vidal lived both in Italy and California and towards the end of his days he sold his villa in Italy and settled in LA. He died in California in 2012 after suffering from pneumonia. His death was thought to be a loss to ‘culture of the U.S.’.
Trivia
This talented American writer never got any formal acknowledgement or credits for co-screenwriting ‘Ben-Hur’. 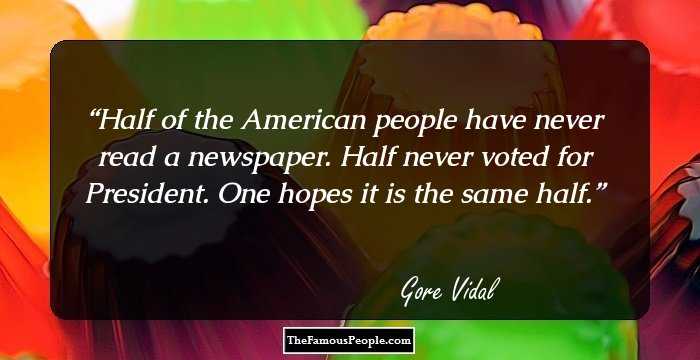 See the events in life of Gore Vidal in Chronological Order