(Novelist & Essayist Known for His Novels: ‘One Flew Over the Cuckoo's Nest’ & ‘Sometimes a Great Notion’)

One of America’s most critically acclaimed and controversial authors, Ken Kesey’s rise to literary and cultural prominence was the result of his idiosyncratic skills and experiences. He is well-known for his novel, ‘One Flew over the Cuckoo’s Nest’, which was written after he served as an experimental ‘guinea pig’ and aide in a hospital. His other notable works include, ‘Kesey’s Garage Sale’, ‘Demon Box’, ‘Last Go Round’ and ‘Kesey’s Jail Journal’. He promoted the usage of drugs through a group he formed with known as the ‘Merry Pranksters’. The ‘Pranksters’ were known for their notoriety and for their ‘acid tests’, which eventually became the inspiration for a book written by another author, Tom Wolfe. Although his drug usage landed him in jail a couple of times, he used his hallucinogenic experiences with LSD and Acid Tests as inspirations for his works. An alumnus of Stanford University’s creative writing program, he considered himself a yoke between the hippies and the ‘Beat Generation’ of the 60s. Towards the end of his career, he mainly kept to himself and made artistic offerings on the internet or held ritualistic renewals of the ‘Acid Test’. He occasionally made appearances at rock concerts with his ‘Pranksters’ and even wrote essays for popular magazine like ‘Rolling Stone’. To learn more about his life and works, scroll further. American Celebrities
Novelists
American Men
University Of Oregon
Male Writers
Childhood & Early Life
Ken Kesey was born in La Junta, Colorado to dairy farmers, Frederick Kesey and Geneva Smith.
His family moved to Springfield, Oregon and he enrolled at the Springfield High School. He was a wrestling champion in the 174 pound weight division and was also known for his academic brilliance. He graduated from high school in 1953.
He attended the University of Oregon and graduated with a degree in speech and communication in 1957.
He enrolled in the creative writing program at Stanford University in 1958, where he developed lifelong friendships with a number of authors. It was during this time he participated in army experiments involving LSD and mescalin as a guinea pig. These experiences inspired him to write his first novel.
He began working on the manuscript of ‘One Flew over the Cuckoo’s Nest’ after he was awarded a fellowship by Ford Foundation in 1960. 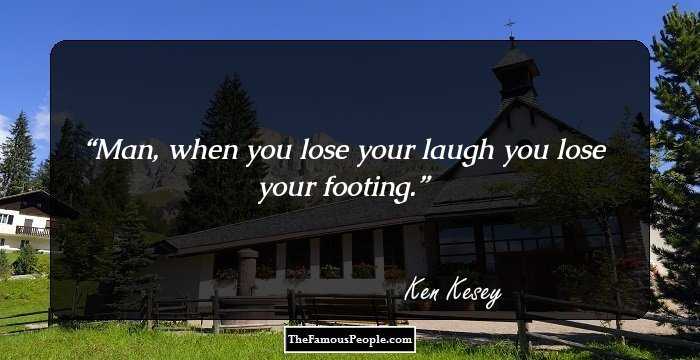 Quotes: You
Continue Reading Below
Career
'One Flew over the Cuckoo’s Nest' was published in 1962 and he became famous overnight. The success enabled him to move to a log cabin, where he frequently entertained his guests with 'acid test' parties.
His second book, 'Sometimes a Great Notion' was published in 1964. The same year, he formed a closely-knit group called the 'Merry Pranksters'. They toured the country and kept organizing parties involving ‘acid tests’ till 1966
He authored a collection of essays, which were published in the book ‘Kesey’s Garage Sale’ in 1973. The book received tepid reviews from critics.
In 1975, he was involved in creating the film adaption of his novel ‘One Flew over the Cuckoo’s Nest’. But a small tiff with the production house caused him to leave, two weeks into production.
His novel, ‘Caverns’ was published in 1989. He had begun writing the novel when he was a student at the University of Oregon. Known for its goofy plot twists, the novel became a critically acclaimed book.
In 1994, he toured with the ‘Merry Pranksters’ and performed a musical play called, ‘Twister: A Ritual Reality’.
His last major work was an essay, which he wrote for the Rolling Stone magazine in 2001, advocating peace post-September 11 attacks. 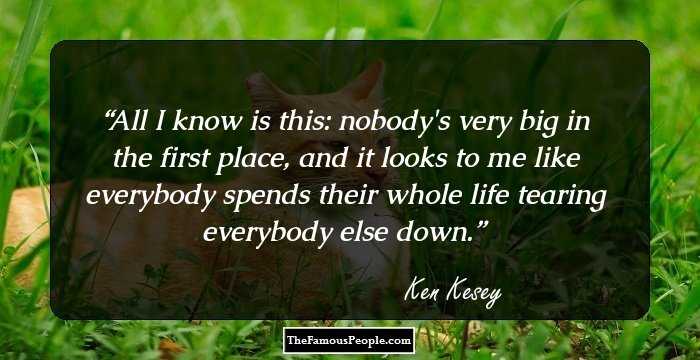 Quotes: Life, Me, Like, I
Major Works
‘One Flew over the Cuckoo’s Nest’ was published in 1962 and is a study of the human mind and behaviorism. This was considered a masterpiece and was even adapted into a Broadway play and a film in 1975. Time Magazine also included this novel in their list of ‘100 Best English-language Novels’.
His second novel, ‘Sometimes A Great Notion’ was published in 1964 which is considered to be his magnum opus. The novel was adapted for both stage and film and was voted number one in a list of ’12 Essential Northwest Works’, of Western American literature.
Personal Life & Legacy
In 1956, he eloped with his childhood sweetheart, Norma ‘Faye’ Haxby. They had three children. He fathered another child with a ‘Merry Prankster’ member, Carolyn Adams.
He promoted the use of drugs as a means to attain individual freedom. However, his frequent drug usage landed him in jail for six months in 1965.
In 1984, his 20-year-old son, Jed, passed away in an accident. This deeply affected him and his writings.
He underwent a liver surgery to remove a tumor, but passed away due to surgical complications on November 10, 2001.
He has been depicted in a number of documentaries and stage adaptations such as ‘The Electric Kool-Aid Acid Test’ and ‘Magic Trip’. 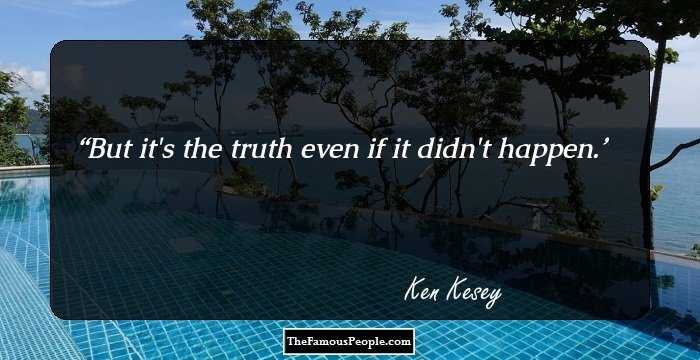 Trivia
This famous author would have been a wrestler, had it not been for a serious shoulder injury, after which, he took to writing.

See the events in life of Ken Kesey in Chronological Order