Advanced Search
Adrienne Rich was an American poet, essayist and feminist. She was born to Jewish-Protestant parents. Her father encouraged her to read and write from a very young age and home tutored her. She spent a great deal of her time in her father’s library which was stocked with works of great writers. She worked hard to fulfil her father’s wishes, and by the time she was twenty-two, she come out with her first collection of poems, ‘A Change of World’. She married Alfred Conrad, an Economics Professor and had three sons. Their marriage became severely strained because of her being a lesbian. They separated and Conrad committed suicide. A large portion of her work portrayed her thoughts about lesbianism and feminist activism. Her poems and essays were well received, and she won a series of awards and recognitions from various quarters. Her collections of poems include ‘The Diamond Cutters’, ‘Snapshots of a Daughter-in-Law’, ‘Twenty-One Love Poems’, ‘A Wild Patience Has Taken Me This Far’, and ‘The Fact of a Doorframe’. Her critically acclaimed essays include: ‘The Art of the Possible: Essays and Conversations’ and ‘Compulsory Heterosexuality and Lesbian Existence’. Salman Rushdie
DID WE MISS SOMEONE?
CLICK HERE AND TELL US
WE'LL MAKE SURE
THEY'RE HERE A.S.A.P
Quick Facts

American Celebrities
Feminists
Poets
Essayists
Non-Fiction Writers
Childhood & Early Life
Adrienne Cecile Rich was born to Arnold Rice Rich, the Chairman of Pathology at The Johns Hopkins Medical School and Helen Elizabeth Jones Rich, a concert pianist and composer.
She was schooled at home and started attending school from fourth grade. She later attended the Roland Park Country School. She earned her college diploma from Radcliffe College, Harvard.
Her poems ‘Sources’ and ‘After Dark’ speak about her relationship with her father and the hard work she put in to fulfil her parents' ambitions. 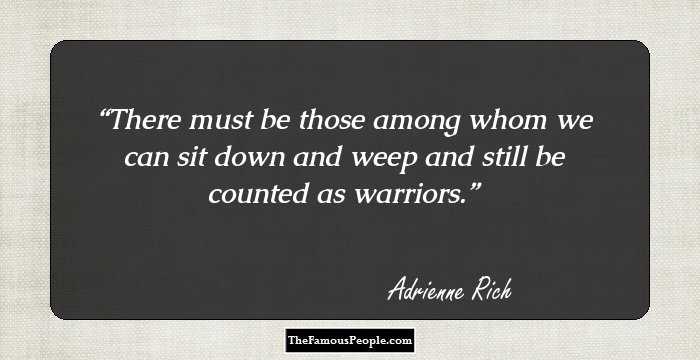 Continue Reading Below
Career
In 1966, she moved to New York with her husband and children. She became involved in anti-war, civil rights and feminist activism. Her husband took up a teaching position in City College.
8For two years starting 1967, she gave lectures at Swarthmore College. She taught in the Writing Division of Columbia University School of the Arts, as an assistant professor.
As a protest against the Vietnam-American War in 1968, she signed the ‘Writers and Editors War Tax Protest’, pledging not to pay taxes. Her writings reflected her radical views on politics.
She began teaching in the SEEK program in City College of New York in 1968. During this period, she wrote poems like ‘Necessities of Life’, ‘Leaflets’ and ‘The Will to Change’.
In 1979, Adrienne Rich compiled and republished some of her essays in ‘On Lies, Secrets and Silence: Selected Prose’, wherein she asserted the need for sexual equality.
She was conferred an honorary doctorate from Smith College in 1979. She then shifted with her partner, Michelle Cliff, to Montague, MA and then relocated to Santa Cruz, where Rich pursued her teaching and writing career.
In the 1980s, she lectured at Scripps College, San Jose State University, Stanford University and Cornell University and wrote ‘Your Native Land, Your Life’, ‘Blood, Bread, and Poetry’, and ‘Time’s Power: Poems 1985–1988’.8In 1990, her work resulted in the founding of ‘Bridges: A Journal for Jewish Feminists and Our Friends’. She was the journal’s editor and explored the cause of Jewish women's rights.
Her works through the 1990s were a mix of poetry and essays: ‘Midnight Salvage: Poems 1995–1998’, ‘The Art of the Possible: Essays and Conversations’, and ‘Fox: Poems 1998–2000’. 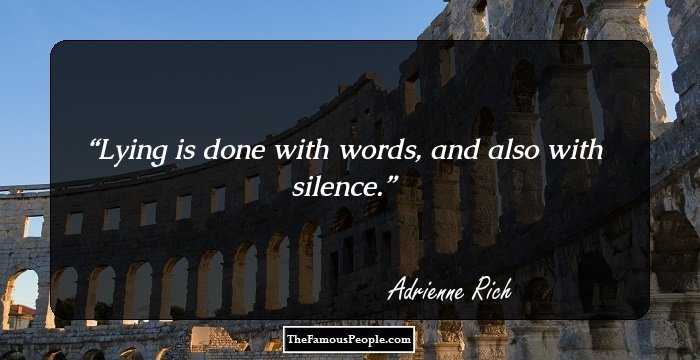 Continue Reading Below
Major Works
In 1951, Adrienne Rich’s first collection of poetry, ‘A Change of World’ was published. Renowned poet W.H. Auden selected it for the Yale Series of Younger Poets Award and also wrote its introduction.
In 1955, her second collection of poems, ‘The Diamond Cutters’ was published to critical acclaim. Her third collection, ‘Snapshots of a Daughter-in-Law’, written after her marriage, expressed the struggle and turmoil she experienced as a wife and mother.
Her poems ‘Twenty-One Love Poems’, ‘A Wild Patience Has Taken Me This Far’, and ‘The Fact of a Doorframe’ expressed her views on lesbianism. She also wrote the critically appreciated essay, ‘Compulsory Heterosexuality and Lesbian Existence’.
Awards & Achievements
‘Diving into the Wreck’ won Rich the 1974 National Book Award for Poetry.
She was awarded the ‘Ruth Paul Lilly Poetry Prize’, the ‘Elmer Holmes Bobst Award in Arts and Letters’ from NYU, and the ‘National Poetry Association Award for Distinguished Service’ to the Art of Poetry.
Her poems, ‘An Atlas of the Difficult World’ published in 1991 won the ‘Los Angeles Times Book Award in Poetry’, the ‘Lenore Marshall/Nation Award’, the ‘Poet's Prize’ and ‘Commonwealth Award in Literature’. 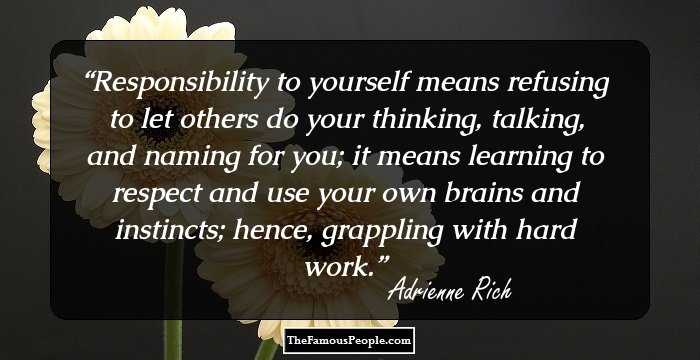 Quotes: Yourself, Learning
Personal Life & Legacy
In 1953, Adrienne Rich married Alfred Haskell Conrad, an Economics Professor at Harvard University. They settled in Cambridge, Massachusetts. They had three sons – David, Paul and Jacob.
By 1970, her marriage was considerably strained. Conrad began to believe that she had lost her mind. They separated in mid-1970. In October, Conrad drove into the woods and shot himself.
In 1976, Rich entered into a lifelong lesbian relationship with Jamaican-born novelist and editor, Michelle Cliff. Her relationship inspired her controversial book, ‘Of Woman Born: Motherhood as Experience and Institution’.
Adrienne Rich passed away at her Santa Cruz, California home. She is survived by her sons, grandchildren and partner, Michelle Cliff.
Trivia
This celebrated writer refused to accept the National Medal of Arts in protest to the House of Representatives’ vote to end the National Endowment for the Arts in 1997.
This illustrious poet turned down an invitation from President Bush in 2003 for a poetry event at the White House in protest to the Iraq war.
Recommended Lists:
Writers #1168

Quotes By Adrienne Rich | Quote Of The Day | Top 100 Quotes

See the events in life of Adrienne Rich in Chronological Order