(Writer and Filmmaker, Best Known for her Essay 'Notes on 'Camp')

Susan Sontag was an American literary figure who was known for her liberal thinking, which reflected in her works. Her words were always thought-provoking and engaging, often generating a lot of debate and earning her both praise and criticism in equal measure. She educated herself extensively in literature, philosophy and religion, and accumulated profound experiences by interacting with intellectuals from various fields. In her first work, ‘On Photography’, she displayed confidence and maturity far beyond her age. Over the years, she did a variety of works, but film criticism was her forte, as she established herself as one of the foremost influential critics of her time. Among her other numerous works, it was her laboriously compiled essays which brought out the aesthete inside her. In her later years, she went on to achieve mainstream commercial success with her two acclaimed novels ‘The Volcano Lover’ and ‘In America’. With a personality as bold as her writings, Sontag also became a vocal political activist against US’ war policies and visited the war-afflicted countries. Even after her demise, Susan continues to live on through her work and continues to be an inspiration to the young liberal thinkers around the world. She will always be remembered as someone who wasn’t afraid to call a spade a spade. American Celebrities
Directors
Philosophers
Non-Fiction Writers
American Women
Childhood & Early Life
Susan Sontag was born as Susan Rosenblatt to Mildred and Jack Rosenblatt in New York City. Her father, a fur-trader in China, died of tuberculosis when Susan was just five.
Sontag moved to Tucson, Arizona with her mother and sister where her mother married Nathan Sontag, a U.S. Army Captain. The family then moved to Los Angeles where Sontag studied in ‘North Hollywood High School’.
She enrolled at the ‘University of California’, Berkeley but transferred to ‘University of Chicago’, where she undertook studies in philosophy, ancient history and literature.
After graduating with a Bachelor of Arts degree in 1952, she taught English at the University of Connecticut for a year. She studied literature, philosophy and theology at Harvard University and earned two Master of Arts degrees in Philosophy and English.
She was awarded a fellowship to St Anne's College, Oxford, where she studied for some time before transferring to ‘University of Paris’ in 1957. Her time in Paris provided her with extensive knowledge of French culture.
She returned to the US in 1958 and immediately divorced her husband Philip, after which she started living in New York with her son in a small apartment. 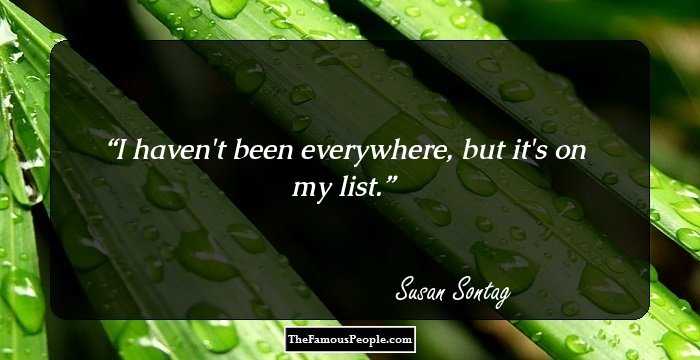 Harvard University
University Of Chicago
University Of California, Berkeley
Women Writers
Career
From 1960 to 1964, she taught at City College, Sarah Lawrence College and in the religious studies department at Columbia University. Around this time she also started working on a novel.
In 1963, she completed her first novel, ‘The Benefactor’, which is about a man’s interpretation of his disturbing dreams.
In 1964, she published her first essay, ‘Notes on Camp’, which generated considerable debate and bought her a lot of attention.
From 1966 to 1969, she was very prolific and published ‘Against Interpretation’, a collection of essays advocating sensory reception of art instead of scholastic, ‘Death Kit’, a novel censuring US participation in Vietnam War, ‘Trip to Hanoi’, a travelogue and ‘The Style of Radical Will’, another compilation that dealt with modern culture.
She also built a good reputation as a film critic and in 1967 she was a part of the jury at the Venice and New York film festivals.
‘Duet for Cannibals’, her directorial debut was screened in 1969 at the New York festival. She directed three more films during her lifetime.
In 1977, she published ‘On Photography’, a collection of essays on the history and role of photographs in modern society. It received widespread acclaim and recognition.
In 1978, she published a monograph ‘Illness as Metaphor’ a criticism of the way modern culture perceives diseases and their victims.
1990 onwards, she tried her hand at writing plays and during the next eight years, she wrote four plays. Some of her famous plays include ‘The Way We Live Now’, which is about the AIDS epidemic, ‘A Parsifal’, an opera-inspired deconstruction, ‘Alice in Bed’ and ‘Lady from the Sea’, an adaptation of a 19th century play.
Continue Reading Below
Sontag published two bestselling fiction novels in the 1990s, ‘The Volcano Lover’, a historical romantic novel based in Naples and ‘In America’, which narrates the rise to stardom of a Polish actress in California.
Her last book, ‘Regarding the pain of others’, was released in 2003. It is a monograph on war and disaster. 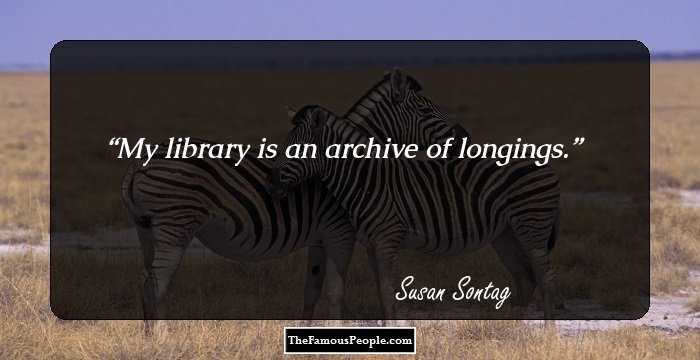 Women Essayists
Capricorn Writers
American Writers
American Directors
Major Works
‘On Photography’, a collection of essays which she wrote over a period of five years, is considered to be her masterpiece. The essays dwell upon the value of a photograph and also the significance of photographs in modern culture.
Her 1999 award-winning novel ‘In America’ traces the life of a Polish actress and her entourage in California. The novel paints a colourful portrait of America as a nation on the verge of modernity. This novel has elements of Sontag’s earlier provocative writing too.
Recommended Lists: 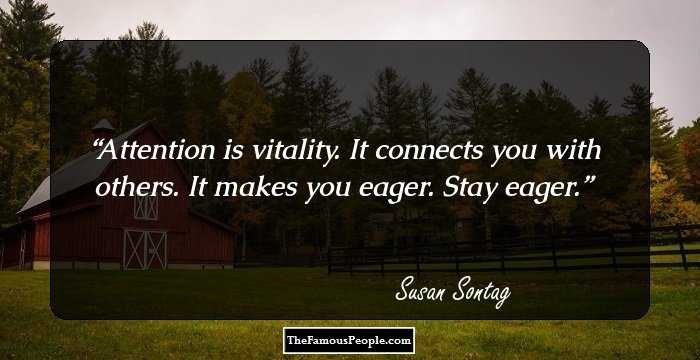 American Female Writers
American Female Essayists
American Female Directors
Women Non-Fiction Writers
Personal Life & Legacy
At the University of California, Berkeley she met Philip Rieff, a sociology instructor who she married just ten days after meeting him. The same year, she gave birth to her son David Rieff.
Sontag realized that she is a bisexual when she was fifteen. Post her divorce to Philip Rieff, she was involved in numerous romantic relationships. Her partners included writer and model Harriet Sohmers Zwerling, playwright Mar�a Irene Forn�s, artist Jasper Johns and actress Nicole St�phane.
She was diagnosed with Breast Cancer in 1976, but recovered after two and a half years of treatment.
In 1989, she met famous portrait photographer Annie Leibovitz and had a long relationship with her till her death.
Her son David Rieff is a writer himself and has also edited a lot of Sontag’s works.
She died on 28 December 2004 due to acute myelogenous leukemia.
Recommended Lists:

American Female Philosophers
American Non-Fiction Writers
Women Intellectuals & Academics
Women Film & Theater Personalities
Trivia
This famous literary icon was engaged in substantial humanitarian work in Bosnia, where she also directed one of her films. After her death, a street in Sarajevo was named after her.
Recommended Lists:

Quotes By Susan Sontag | Quote Of The Day | Top 100 Quotes

See the events in life of Susan Sontag in Chronological Order