(Italian composer Best Known for His Operas: ‘The Barber of Seville’, ‘La Cenerentola’ and ‘Semiramide’)

Giachino Rossini was an Italian opera composer best known for his operas such as  Il barbiere di Siviglia and Tancredi. He was born to musician parents and exhibited signs of natural talent in music at an early age. He began composing music at the age of 12 and received formal education from a music school in Bologna. He began his opera composing career at the age of 18 and in the next one and a half-decade, he composed 34 operas. He worked at a relentless pace and cemented his place among the most talented opera composers of his time. The massive success of his operas such as Il barbiere di Siviglia, L'italiana in Algeri and La Cenerentola brought him immense name and wealth. He worked in Rome, Naples, Venice and Paris and was also invited to London for King George IV’s residency. When he was at the peak of his success in his 30s, he retired from opera composing. The exact reason for this abrupt step was never known. His final opera was composed in the late 1829s, titled Guillaume Tell. Antonio Lucio V...
DID WE MISS SOMEONE?
CLICK HERE AND TELL US
WE'LL MAKE SURE
THEY'RE HERE A.S.A.P
Quick Facts

Gioachino Rossini was born Gioachino Antonio Rossini, on February 29, 1792, in Pesaro, Italy. He was born to a musician father named Giuseppe Rossini and a seamstress mother named Anna. Gioachino was raised as the only child in the family. His parents were always disputing as his father was impetuous and did not care about the household. He did not earn much as well. The entire burden of the household fell on his mother’s shoulders.

When Rossini was six years old, his mother began a career as an opera singer. However, she was an untrained singer and hence after initial success, she lost her credibility. The family eventually moved to Lugo in 1802, where Rossini began his education. Along with subjects such as Italian, Latin, and maths, he studied music. With both his parents being professional musicians by then, Rossini began developing an interest in the field himself. Rossini also played the triangle in the music productions that his father participated in.

While he was a lazy student when it came to other subjects, Rossini focused on his musical learning and later, he enrolled at the Philharmonic School, which was a local music school. By the time he was 12 years old, he had begun composing sonatas.

After his father’s imprisonment due to political upheaval, he moved to Bologna with his mother. There he enrolled in the Liceo Musicale and resumed his training in piano, cello, and singing. He later joined the composition classes and that was when he developed a keen interest in opera composing. 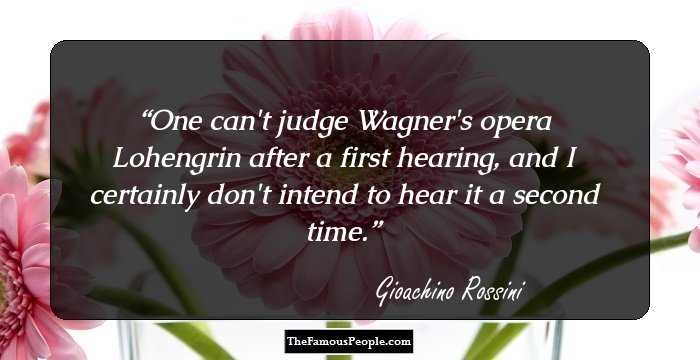 Rossini had begun his career while he was still studying at Liceo. He worked at local theatres as a repetiteur and performed as a keyboard soloist. His skills as a composer had become too obvious by the time he was 16 years old. He composed a piano cantata named Il pianto d'Armonia sulla morte d’Orfeo, for which he won the top prize at Bologna Conservatory.

He was asked to compose his first opera in 1810 by a popular tenor named Domenico Mombelli. The resulting opera was titled dramma serio, Demetrio e Polibio. However, it was performed only two years later in 1812. The opera cemented his place as an original composer with a very distinct style. Following the success of this small scale two-act opera, he composed Il signor Bruschino which was performed in 1813. Both these operas were hugely successful.

In 1812, he also composed the comic opera titled La pietra del paragone, which was performed at La Scala, Milan. It was massively successful and ran for 53 consecutive weeks. Other than immense financial rewards, Rossini was also exempted from military training.

He worked at a breakneck pace composing operas that were of the highest qualities. He also experimented with genres. He developed the comic opera titled L'italiana in Algeri in 1813 within a few weeks of Tancredi. Both the operas were in different genres. The success of these established Rossini as one of the best-emerging opera composers of his time. By then, he was known as a maestro di Castello, which meant that any opera composed by him would guarantee a full house.

However, the success of the two-act opera titled Tancredi was humongous and almost eclipsed all the other works by the talented composer. The opera was performed in Venice in 1813 and had a libretto written by Gaetano Rossi. The entire opera was conceived in a month and was based on Voltaire’s play of the same name. Many critics call Tancredi the best work of Rossini to date. While it had a happy ending, which was different from Voltaire’s sad one, Rossini later changed the ending to match it with the original ending as written in the play.

For the next few years, he worked in Bologna, Rome, Venice and Milan, and produced operas of all sorts with varying degrees of success.

He had set the bar so high for himself following the success of Tancredi that even he could not even match it in his next few opera ventures. After a sad reception to a few of his operas, he shifted back to Bologna. In 1815, he received an offer to work in Naples in exchange for a lucrative amount of money. However, he posed a serious threat to the popularity of the local opera composers from Naples and hence, there were attempts to tarnish his reputation.

All attempts were futile as the humongous success of his opera titled Elisabetta regina d'Inghilterra silenced all his critics. His other opera titled Il barbiere di Siviglia was performed in Rome and further became a major success. It also attracted a little bit of controversy since it was heavily influenced by Giovanni Paisiello’s opera titled Barbiere. However, the success of Rossini’s opera eclipsed its success and even the ones who hated the idea of a revision of the original, admired Rossini’s take on it greatly.

Rossini produced 20 operas between 1815 and 1823. He worked fast and didn’t adhere to the set traditions of the operas. It was the norm that the opera must have a happy ending. His opera titled Otello was performed in Rome. It was based on the famous play by William Shakespeare and famously had a tragic ending. However, Rossini had to change the ending to fit it into the Roman operatic culture.

He returned to Bologna in 1822 but soon after he arrived, he got an invitation by Prince Metternich to visit Verona, Italy and work there for a little while. The offer was too big to refuse and Rossini went there.

In 1823, he moved to England upon insistence from the manager of King’s Theatre, in London. There he met King George IV and was paid a big sum for his residency of five months. Upon returning from England, he received another huge offer to serve as the music director of Theatre Italien in Paris. By the time he was 32 years old, Rossini was among the wealthiest opera composers in Italy.

This financial independence must have played a role in Rossini’s early retirement. Guillaume Tell was his final opera which was staged in 1829 to widespread success. He practically disappeared from the scene for the next many decades. He lived in Bologna until 1855 and moved to Paris and resurfaced around the same time. He organized salons, which became popular among music lovers and musicians from all over Europe.

Gioachino Rossini married Isabella Colbran in 1822 and remained married to her until she died in 1845. In 1846, he married Olympe Pelissier and stayed with her until his death. Rossini did not have any children.

Rossini passed away on November 13, 1868, in Paris. He was suffering from colorectal cancer.

See the events in life of Gioachino Rossini in Chronological Order