(Composer, String player and Choirmaster Who Was a Pioneer in the Development of Opera)

Claudio Monteverdi was an Italian Renaissance composer and a significant developer of new genre — ‘operas’. Working extensively in the tradition of early Renaissance polyphony and concurrently employing the basso continuo technique, an important feature of the Baroque period, he also became a bridge between these two distinctive eras of music history. Born in the middle of the sixteenth century in the Lombardy region of Italy, he studied music with Marc’Antonio Ingegneri, the maestro at the local cathedral. He started writing both religious and secular music early in his life, publishing his first work at the age of 15. Around the age of 22, he started his career as a string player at the Court of Mantua, being appointed to the position of the maestro di capella at the age of 35. Later, he moved to Venice, where he was appointed to the same post at the St. Mark’s. Remaining there till his death, he wrote much religious as well as secular music, also introducing secular elements into church music. 'La favola d'Orfeo', one of his first operas, is being regularly performed till now. Vincenzo Bellini
DID WE MISS SOMEONE?
CLICK HERE AND TELL US
WE'LL MAKE SURE
THEY'RE HERE A.S.A.P
Quick Facts

Italian People
Italian Men
Male Musicians
Male Composers
Taurus Musicians
Childhood & Early Life
Claudio Giovanni Antonio Monteverdi was born in 1567 in Cremona, Lombardy, Italy. Although his exact date of his birth is not known, the records at the church of SS Nazaro e Celso, Cremona states that he was baptized on 15 May 1567 as Claudio Zuan Antonio.
At the time of his birth, Cremona was under the administration of Milan. But because Milan was assigned to Spain under the 1513 Treaty of Noyon he was technically born a Spanish citizen. However, he always considered himself an Italian.
His father, Baldassare Monteverdi, was a barber surgeon and an apothecary while his mother, Maddalena Monteverdi née Zignani, was the daughter of a goldsmith. Claudio was the eldest of his parents’ six children, having three brothers and two sisters. His next brother, Giulio Cesare, also became a renowned musician.
Claudio lost his mother when he was eight or nine years old. By then, Baldassare Monteverdi had made a modest move up the social ladder. In 1576 or 1577, he took a second wife, Giovanna Gadio, fathering three more children with her. But she too died early.
His father next married Francesca Como; but this marriage was childless. In spite of having to adjust to two step mothers, Claudio remained emotionally close to his father, feeling empathy for his father’s repeated losses. It would one day have effect on many of his compositions.
Apart from being an efficient apothecary, his father must have also been musical. At least, he was capable of appreciating the musical talent of his two eldest sons, both of whom began their training in music as choir boys at the local cathedral. However, there is no record about this.
At some point of his boyhood, Claudio began to study music with Marc’Antonio Ingegneri, at that time the maestro di cappella of the Cremona Cathedral. However, there is no proof of this except Claudio’s own admission in his early publications.
Ingegneri was a composer of international repute and a master of the musica reservata vocal style. Under his tutelage, Claudio not only learned to sing, but also developed mastery over violin and other instruments belonging to viol family.
Ingegneri also grounded in his pupil the techniques of Renaissance polyphonic writing. Claudio Monteverdi’s first opus, published in 1582 from Vienna, provided clear indication of this. Entitled ‘Sacrae cantiunculae’, it was followed by ‘Madrigali spirituali’, printed in 1583 from Brescia. In both these publications, he claimed to be Ingegneri’s student. 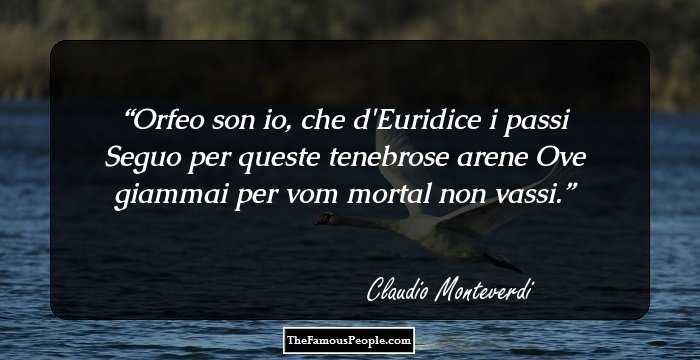 See the events in life of Claudio Monteverdi in Chronological Order 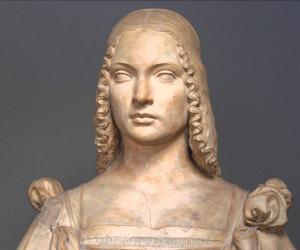