Gianni Maria Versace was an Italian fashion designer, especially known for his bold style and flashy designs. Raised in the metropolitan city of Reggio Calabria, he grew up watching his mother designing clothes and running a successful fashion business. It must have influenced him greatly because he started apprenticing under her soon after leaving school and by the age of twenty-six left home to work as a freelance designer in Milan. Within a year, he became known for his excellent designs and buoyed by his success opened his own establishment at the age of thirty-one, presenting his first signature collection for women in the same year. Going against the prevailing trend of muted colors and simplistic designs, he began using bright colors, bold prints, and sexy cuts. Very soon, he also started using unusual materials like aluminum mesh and innovative skills like laser technology to fuse leather and rubber, becoming an international celebrity within a short span of time. He did not live to enjoy his success for long; he was assassinated at his very doorstep at the age of fifty. Alessandro Michele
DID WE MISS SOMEONE?
CLICK HERE AND TELL US
WE'LL MAKE SURE
THEY'RE HERE A.S.A.P
Quick Facts

Giovanni “Gianni” Maria Versace was born on 2 December 1946 in the city of Reggio Calabria, Italy. His father, Antonio Versace, was a salesman while his mother, Francesca, ran a successful dressmaking business from her own boutique.

Gianni had his education at Liceo Classico Tommaso Campanella, where he studied Latin and ancient Greek; but did not finish the course. Instead, he started his training at his mother’s workshop. At this stage, he showed interest in ancient Greek history, being influenced by the historic landscape of the area. 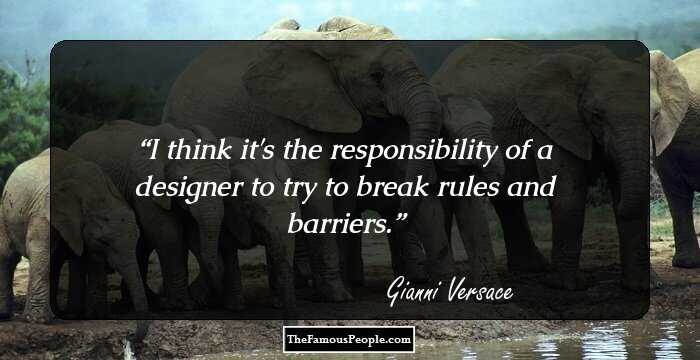 In 1972, Gianni Versace moved to Milan, where he started working freelance, designing in the same year his first independent line of clothes for a clothing firm called Florentine Flowers. In the following year, he received much appreciation for creating a youth line called Byblos, which he designed for Genny.

In 1974, he presented his first collection of leather clothes for Complice, becoming one of the first designers to use leather at that time. Sometime in-between, he also worked for Mario Valentino, and Callaghan.

Although he began to think of opening his own company by 1976, it took him two years to do so. Finally in 1978, he launched Gianni Versace Donna, which was later renamed as Gianni Versace SpA.

Both his siblings became involved with his company from the very beginning with his sister Donatella Francesca Versace acting largely as a designer and critic. As the business began to grow, Donatella became the Vice President of the company while their brother, Santo Domenico Versace, became its CEO

In 1978, Gianni Versace presented his first signature collection for women. It was followed by a fashion show and opening of his first boutique in Milan. Shortly, he also presented his first menswear line, becoming an international sensation for his bold and unusual designs within a short span of time.

In 1979, Gianni Versace collaborated with Richard Avedon for the first photography campaign and in the following year designed his first logo type. Next from 1981, he started designing costumes for stage productions, beginning with Richard Strauss' ballet, ‘Josephslegende’.

In 1982, he invented a metal chain-mail, which he called Orton, making dresses with it, launching the same at the Paris Opera. Also in the same year, he diversified his business, going into jewelry and china.

Continuing to produce innovative lines throughout 1980s, he built a fashion empire around him. While his detractors called his creations vulgar, he remained unfazed; designing among others, sophisticated bondage gear, polyvinyl chloride baby-doll dresses, and silver-mesh togas, adding diffusion line Instante for younger, less affluent consumers, in 1985.

In 1989, he expanded into haute couture with the launch of Atelier Versace and held the first exhibition at Ritz Hotel in Paris. Slowly, he began to move westward across the Atlantic Ocean to open stores in the USA, having opened his first overseas store in Madrid 1988.

In 1990, he changed his trademark and in its place adopted the figure of Medusa. Very soon, he started a new trend, featuring supermodels like Naomi Campbell, Christy Turlington, and Linda Evangelista in his fashion shows and advertisement campaign in 1991. Also in 1991, he launched his classic Signature fragrance.

Continuing to expand, he launched Versace Home Collection, which included pillows and sheets, in 1992. In the same year, he bought a home on Ocean Drive in Miami Beach, Florida and spent $33 million on renovating it.

In 1993, Gianni Versace SpA launched its first children’s line and opened its flagship store in New York City. Sometime now, he also began publishing numerous books, which include ‘Men Without Ties’ (1994), ‘Rock and Royalty’ (1996), and ‘The Art of Being You’ (1997). 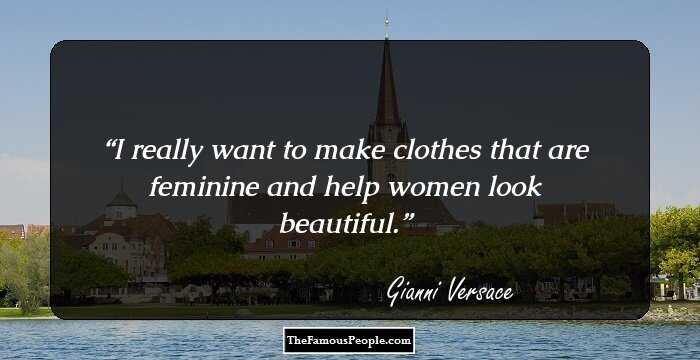 While Gianni Versace creations are known for their bright colors, bold prints, and sexy cuts, one of his most famous creations was a black dress held together at the sides by gold safety pins. Worn by actress Elizabeth Hurley at a movie premiere in 1994, the dress was an instant success, helping her to become a star.

Gianni Versace was named best fashion designer for his 1982 1983 Fall-Winter collection for women and received the L'Occhio d'Oro award for it.

In 1985, he received the Silver Mask Award for his contribution to theatre.

In 1988, he was named "the most innovative and creative designer in the world” by the jury of the Cutty Sark Award.

In 1993, he was awarded the CDFA award by the Council of Fashion Designers of America and was also honored by the Presidents of France and Italy. 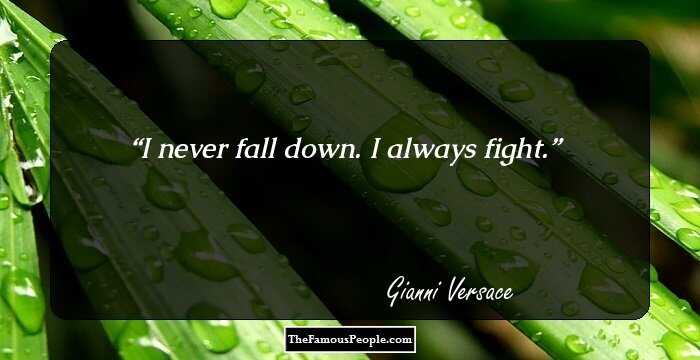 Gianni Versace was openly gay. In 1982, he began a relationship with his long time partner and model, Antonio D’Amico, continuing with the association until his death in 1997. Equally fond of his nieces and nephews, he loved spending time with them.

On July 15, 1997, he was shot dead on the front steps of his home in Miami by a twenty-seven-year-old serial killer called Andrew Cunanan. It is not officially known why he was killed but many believe that they had met before and Cunanan was obsessed about him.

His funeral liturgy, which was attended by many celebrities like Carolyn Bessette-Kennedy, Elton John, and Princess Diana, was held at Milan Cathedral. That apart, a service was also held for him at New York's Metropolitan Museum of Art.

His mortal remains were cremated and his ashes were returned to the family's estate near Cernobbio before being buried in the family vault at Moltrasio cemetery.

According to many critics, Gianni Versace was at the peak of his career at the time of his death, starting to create increasingly refined, yet colorful and sexy designs in place of his earlier gaudy ensembles.

Quotes By Gianni Versace | Quote Of The Day | Top 100 Quotes

See the events in life of Gianni Versace in Chronological Order