(Achieved Fame As the Lead Guitarist of the Beatles)

George Harrison was an English musician, singer-songwriter, and producer. A powerful contributor to the field of music, Harrison achieved fame as the lead guitarist of the popular rock band, ‘The Beatles.’ From an early age, he was inspired by the beauty of music. Throughout his life, he worked hard to popularize ‘popular music.’ What is interesting to note is that Harrison used the power of music to raise awareness about spirituality. He was deeply and profoundly inspired by Hinduism and was an ardent admirer of Indian culture and mysticism. The same was reflected in most of his work, which had an undeniable presence of Eastern music and instruments. While Harrison was surrounded by musicians like McCartney and Lennon, who were geniuses in their own right, their presence did not overshadow his talent and skills as he went on to attain much popularity and critical acclaim. While he did excellently well during his association with ‘The Beatles,’ he went on to become a powerful spiritual songwriter with an expansive sense of melody after going solo. Till date, he is remembered for making a large number of westerners appreciate Eastern religion and music. Boy George
DID WE MISS SOMEONE?
CLICK HERE AND TELL US
WE'LL MAKE SURE
THEY'RE HERE A.S.A.P
Quick Facts

Also Known As: The Quiet Beatle

British Celebrities
Pop Singers
Rock Singers
Lyricists & Songwriters
British Men
Childhood & Early Years
George Harrison was born on 25 February 1943, in Liverpool, England. He was the youngest of the four children, born to Harold Hargreaves and Louise Harrison. He had a sister named Louise and two brothers named Harry and Peter.
Young Harrison’s interest for music came from his mother who was an enthusiastic fan of music. She often listened to ‘Radio India’ while being pregnant with Harrison, which best explains the latter’s love for music and Eastern philosophy.
Harrison attended ‘Dovedale Primary School’ after which he took admission in the prestigious ‘Liverpool Institute’ in 1954. 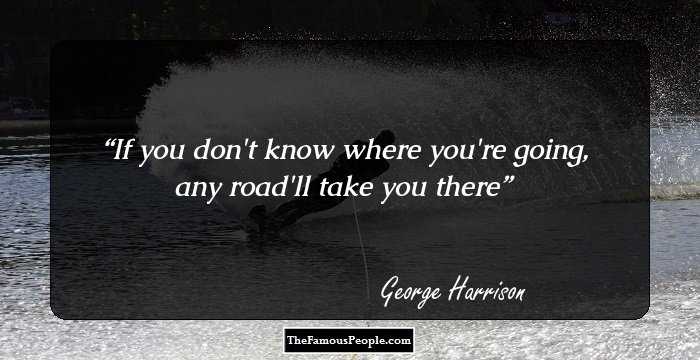 Quotes: You
Continue Reading Below
Career
Harrison formed a skiffle band named ‘Rebel’ with his brother Peter and friend Arthur Kelly. However, it was his association with Paul McCartney that shaped Harrison’s music career at large.
McCartney encouraged Harrison to audition for John Lennon’s ‘Quarrymen,’ which he eventually became a part of. Barely 15 years old, Harrison was a master at his art and enjoyed his role as a guitarist.
Together, they formed a band named ‘The Beatles.’ In 1960, they gave their first performance as ‘Beatles’ at the Kaiserkeller club in Hamburg.
In 1962, ‘Beatles’ tasted success as their first single ‘Love Me Do’ peaked at number 17 on the ‘Record Retailer’ chart. Two years later, at the time of their debut album’s release, ‘Beatlemania’ had already become a rage.
Harrison’s first solo writing credit was for the song ‘Don't Bother Me’ which he wrote for the group’s second album ‘With the Beatles’ in 1963.
Harrison was solely responsible for bringing in the genre of folk rock into the group’s music albums. His interest towards Indian classical music was apparent as he used sitar for the song ‘Norwegian Wood’ which was part of the album, ‘Rubber Soul.’ The album was Harrison’s favorite ‘Beatles’ album.
Harrison’s love for eastern music and instruments was reflected in three of the compositions in the album ‘Revolver.’ Not just the sitar, but instruments like tambura, table, and swarmandal were also used in the songs recorded by ‘The Beatles.’
Harrison’s interest in eastern music grew by leaps and bounds, due to which he started deviating from ‘Beatles.’ ‘Within You, Without You’ was his solo composition for the album ‘Sgt. Pepper's Lonely Hearts Club Band.’ The song not only reflected his urge for experimentation, but also indicated his desire to go solo.
Harrison’s love for traditional Indian music, accompanied by several other factors led to the final collapse of the band on 10 April 1970.
Continue Reading Below
By that time, Harrison’s fame was escalating steadily, thanks to his songwriting skills. He had a convincing list of hits to fall back on, such as ‘Here Comes the Sun,’ ‘Something,’ and ‘For you Blue.’ Additionally, he had two solo albums, namely ‘Wonderwall Music’ and ‘Electronic Sound,’ the former being the first solo album by a ‘Beatle.’
After the break-up, Harrison released ‘All Things Must Pass.’ By far, it has been regarded as his best work. The album topped the charts on both sides of the Atlantic.
In 1971, Harrison contributed to the ‘Concert for Bangladesh’ along with Ravi Shankar at the ‘New York Madison Square.’ The event was a precursor for future large-scale charity shows. It was followed up with an album and concert film.
Harrison’s future albums included ‘Living in the Material World,’ ‘Thirty Three & 1/3,’ ‘Somewhere in England,’ and ‘Cloud Nine.’
During his last years, he formed the group ‘Traveling Wilburys.’ They released several albums. It was also during this time that ‘Beatles Anthology’ began. It was basically an effort to revive a few ‘Beatles’ songs and let the world know about the Beatles’ career through interviews and chats. 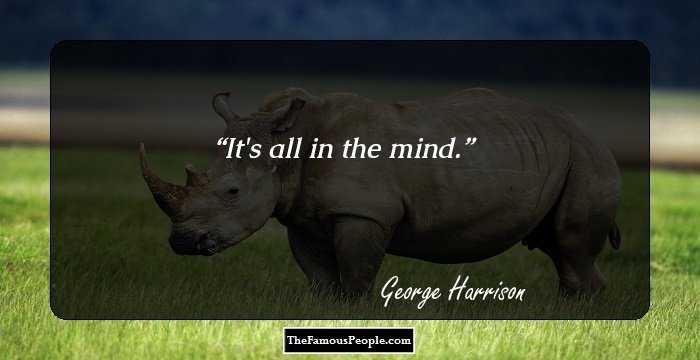 Major Works
‘All Things Must Pass’ achieved critical acclaim and was awarded a ‘Gold disc’ by the ‘Recording Industry Association of America.’ Since then, it has been certified platinum six times.
‘Living in the Material World’ was a follow up for ‘All Things Must Pass.’ It entered ‘Billboard’ at number 23, and reached the number one spot in its second week. The album is said to have sold three million copies.
Awards & Achievements
Harrison, along with other members of ‘The Beatles,’ was appointed ‘Members of the Order of the British Empire’ (MBE) on October 26, 1965.
Continue Reading Below
‘Beatles’ received an ‘Academy Award’ for the ‘Best Original Song Score’ for the film ‘Let It Be’ in 1971.
Harrison has a minor planet ‘4149’ named after him. He was also a proud recipient of the ‘Billboard Century Award.’
He has been ranked number 11 in the list of ‘100 Greatest Guitarists of All Time’ by ‘Rolling Stone’ magazine. 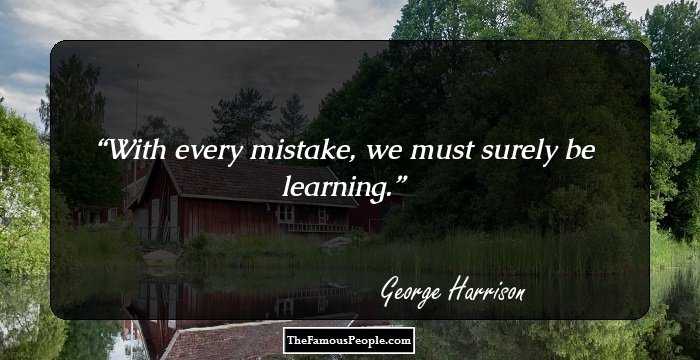 Quotes: Learning
Personal Life & Legacy
Harrison was married twice in his lifetime. His first marriage was with Pattie Boyd in 1966. The marriage ended in 1977 after which he tied the knot with Olivia Trinidad Arias in 1978. He was blessed with a son, whom he named Dhani Harrison, on August 1, 1978.
On December 30, 1999, Harrison was attacked with a kitchen knife at his home. He was hospitalized with more than 40 stab wounds.
Harrison had lung cancer and later brain tumor. He breathed his last on November 29, 2001.
In 2002, on the first anniversary of his death, the ‘Concert for George’ was held at the ‘Royal Albert Hall.’ Two years later, he was posthumously inducted into the ‘Rock and Roll Hall of Fame.’ In 2006, he was posthumously inducted into the ‘Madison Square Garden Walk of Fame.’ The year 2009 witnessed the ‘Hollywood Chamber of Commerce’ honoring Harrison with a star on the ‘Walk of Fame.’
In 2015, ‘The Recording Academy’ honored Harrison with a posthumous ‘Grammy Lifetime Achievement Award’ at the ‘Grammy Awards.’
Trivia
Just like his fondness for music, he shared an equal amount of love for sports, cars, and motor racing, so much so that he became one of the 100 people who purchased the ‘McLaren F1’ road car.
He was awarded ‘Child Is the Father of Man’ award, along with Ravi Shankar, at an annual ceremony, held by ‘UNICEF’ to recognize the fundraising efforts for Bangladesh.
During his lifetime, he not only became an admirer of Indian culture and mysticism, but also became a devotee of Maharishi Paramahansa Yogananda. He also embraced the ‘Hare Krishna’ tradition, particularly the ‘japa-yoga’ chanting with beads.
Despite being a westerner, he mastered a number of Indian classical instruments and brought them to limelight. He also played a major role in representing the Asian culture in the western world.

Quotes By George Harrison | Quote Of The Day | Top 100 Quotes

See the events in life of George Harrison in Chronological Order