Gayatri Chakravorty Spivak is an Indian scholar, literary theorist, and feminist critic. She left for the United States of America to pursue her academic career in the late 1950s. She later taught English and comparative literature and then evolved into a literary critic. Over time, she became an exponent of deconstruction, Marxism, and postcolonialism. She rose to fame after the publication of two of her works. One of them was the translation of 'De la grammatologie' into English, titled 'Of Grammatology,' and the other was the essay 'Can the Subaltern Speak?' In recognition of her works, a lot of universities have awarded her with honorary doctorates. She has received a lot of awards for her books. She has been a recipient of the 'Padma Bhushan,' one of the highest civilian awards presented by the government of India, and the 'Kyoto Prize in Arts and Philosophy,' awarded by the 'Inamori Foundation' of Japan. 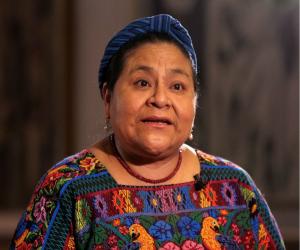 Rigoberta Menchú
Literary Critics #37
Feminists #44
Activists #766
DID WE MISS SOMEONE?
CLICK HERE AND TELL US
WE'LL MAKE SURE
THEY'RE HERE A.S.A.P
Quick Facts

Indian People
Indian Women
Cornell University
University Of Calcutta
Women Activists
Childhood & Early Life
Spivak was born Gayatri Chakravorty February 24, 1942, in Kolkata, the capital of West Bengal, India, to Sivani Chakravorty and Pares Chandra Chakravorty.
She attended the 'St. John's Diocesan Girls' Higher Secondary School' in Kolkata and later graduated with a BA in English (first-class honors) from 'Presidency College’ (known as ‘Presidency University’ since 2010), Kolkata.
She joined a graduate program in English at 'Cornell University,' Ithaca, New York. As she could not get enough funds from the department of English, she transferred to the university’s new program, comparative literature, though she was not proficient in French and German. The department was headed by renowned literary critic and literary theorist Paul de Man.
Her MA dissertation was on the representation of innocence in Wordsworth, under the guidance of M.H. Abrams, another well-known literary critic. She obtained her MA degree in 1962.
In 1963, she joined 'Girton College,' Cambridge, England, as a research student, under the supervision of Professor T.R. Henn.
During the summer that year, she conducted a course titled 'Yeats and the Theme of Death' at the 'Yeats Summer School’ in Sligo, Ireland.
She completed her PhD at 'Cornell' in 1967, under the guidance of Paul de Man.
Continue Reading Below
You May Like

The Best Black Actresses Of All Time
Teaching Career
In the Fall of 1965, even before Spivak completed her PhD, she was appointed as an assistant professor in the department of English at the 'University of Iowa.' She was tenured in 1970.
In 1974, she wrote the book titled 'Myself I Must Remake: The Life and Poetry of W.B. Yeats,' which was made available for her undergraduate students. The same year, she established the MFA in translation in the department of comparative literature.
The following year, she was made the director of the program of the comparative literature department and became a full professor.
In 1978, she became the national humanities professor at the 'University of Chicago.' The same year, she was appointed as the professor of English and comparative literature at the 'University of Texas,' Austin.
She became the “Longstreet Professor in English and Comparative Literature” at 'Emory University,' Atlanta, in 1982.
Four years later, the 'University of Pittsburgh' appointed her as its first “Mellon Professor of English”. She introduced the cultural studies program there.
In 1991, she became the “Avalon Foundation Professor” in humanities at ‘Columbia University.' In 2007, the university elevated her to the status of a university professor, a rare recognition handed over only to a few selected faculty members with significant contributions in their area of expertise.
Published Works
Spivak completed the book 'Myself I Must Remake: The Life and Poetry of W.B. Yeats' in 1974.
In her systematic effort to improve herself, she bought French philosopher Jacques Derrida’s book 'De la Grammatologie' in 1967. The author was unknown to her back then. She was, however, inspired and thus translated the book into English. The translation, titled 'Of Grammatology,' was released in 1976. She later became known for this work.
Continue Reading Below
Her 1983 essay 'Can the Subaltern Speak?' brought her more fame.
In 1987, a collection of her essays, named 'In Other Worlds: Essays in Cultural Politics,' was released.
Another work, ‘Selected Subaltern Studies,' was published in 1988.
In 1990, the work 'The Post-Colonial Critic – Interviews, Strategies, Dialogues' was published.
Three years later, in 1993, she released her book 'Outside in the Teaching Machine.'
In 1994, she ventured into literature and, for the first time, translated three Bengali stories into English, all written by renowned author Mahasweta Devi. The translation was titled 'Imaginary Maps.'
‘The Spivak Reader' was published in 1995.
‘Breast Stories,' released in 1997, marked the second time she translated a Bengali book. The three stories in the book had been written by the same author, Mahasweta Devi.
In 1999, she released three works. Two of them, titled 'Imperatives to Re-Imagine the Planet/Imperative zur Neuerfindung des Planeten' and 'A Critique of Postcolonial Reason: Towards a History of the Vanishing Present,' were academic. The third was a literary work: a translation of two stories by Mahasweta Devi from Bengali to English, titled 'Old Women.'
Continue Reading Below
In 2000, she released the translation 'Song for Kali: A Cycle,' originally written by Ramproshad Sen, the renowned Bengali mystic poet of the 18th century.
‘Chotti Munda and His Arrow' was her fourth translation of Mahasweta Devi's works and was released in 2002.
In 2003, she released another academic book, 'Death of a Discipline.'
She completed 'Other Asias' in 2008.
Her ‘An Aesthetic Education in the Era of Globalization' was released in 2012.
Her book 'Readings' was published in 2014.
One of her upcoming literary works is ‘Red Thread.'
She is a member of the editorial boards of several journals, such as 'Boundary 2,'' Cultural Critique.' 'New Formations,' 'ARIEL,' 'Diaspora,' 'Re-thinking Marxism,' 'Parallax,' 'Public Culture,' and 'Interventions.'
Philosophies & Beliefs
Her books have been reflections of the various philosophies she follows and advocates. Her preface to the book 'Of Grammatology' is now often used as an introduction to the philosophy of deconstruction, which was propounded by Jacques Derrida.
Continue Reading Below
The idea of postcolonialism has been brought out clearly in her works. She is considered one of the experts on the subject
Her approach to feminism was quite different from the Western perception of the subject. She included elements such as history, geography, and class in her theories.
She has conducted lectures and sessions based on her understanding of Marxism.
She has also written and spoken a lot about the rights of the subaltern, especially those of women.
Awards and Honors
In 1997, Spivak received the 'Sahitya Akadami Award' for her translations of Bengali literature into English
She has received numerous honorary doctorates, such as a D.Litt. from the ‘University of Toronto,’ Canada (1999); a D.Litt. from the ‘University of London,’ England (2003); a D.Hum. from ‘Oberlin College,’ Ohio, U.S.A. (2008); a D. Honoris Causa from the ‘Universitat Roveri I Virgili,’ Spain (2011); a D. Honoris Causa from the ‘Rabindra Bharati University,’ Kolkata, India, (2012); a D. Honoris Causa from the ‘Universidad Nacional de San Martin,’ Argentina (2013); a D.Litt. from the ‘University of St. Andrews,’ Scotland, (2014); a D. Honoris Causa from the ‘University of Paris VIII,’ France (2014); an Honorary Doctorate from ‘Presidency University,’ her alma mater (2014); a D.Hum. from ‘Yale University,’ New Haven, U.S.A. (2015); a D.Litt. from the ‘University of Ghana-Legon,’ Ghana (2015); and a D. Honoris Causa from the ‘Universidad de Chile,’ Chile (2016).
In 2012, she became the first Indian to earn the 'Kyoto Prize in Arts and Philosophy.'
She was conferred with the 'Padma Bhushan Award,' the third-highest civilian award in India, in 2013.
In 2018, she received the 'Lifetime Scholarly Achievement Award' from the 'Modern Language Association of America.'
Family & Personal Life
In 1964, she married Talbot Spivak. They legally separated in 1977.
While teaching at the 'University of Iowa,' she courted one of her students, who was 9 years younger to her.
She later married Basudev Chatterji, a history professor at 'Delhi University.’ However, they have been separated for a long time.
She has no children.
Since 1986, she has been training and teaching impoverished adults and children on the borders that West Bengal shares with Bihar/Jharkhand.
In 1997, she founded the not-for-profit organization 'Pares Chandra and Sivani Chakravorty Memorial Foundation for Rural Education.' She funded it using the funds left by her late friend Lore Metzger.
Recommended Lists:
Critics & Connoisseurs #112
You May Like